Concept cars are meant to cross boundaries. That, and establish them. The 1960s saw this subspecies of automobile become a regular fixture on the global stage, with even the stodgiest of marques overcoming reservations and seeing the worth of creating something that might rake in the column inches.

However, the following decade witnessed the movement take flight – and how. The 1970s was all about wedge-shaped projectiles in highlighter pen hues; of scissor doors and pseudo-aerodynamic flaps and ducts. That said, a few designs bordered on the sensible – almost.

Few concept cars ever reached greatness, though. Gathered here are our selection of some of the more memorable show-stoppers of the period, along with a couple of wildcards. None could ever be accused of being boring, which is why we love them still.

The start of the decade witnessed a raft of concept cars emerge from Japan. But few, if any, were as wild as Mazda’s 1970 Tokyo motor show thriller, the RX-500. The styling represented pure sci-fi whimsy, not least the use of butterfly doors, but this was a fully-functional supercar said to be capable of 150mph.

Beneath the fibreglass skin sat the obligatory Wankel twin-rotor engine. The car’s signature feature was the bank of multi-coloured rear lights: under acceleration, they glowed green, then amber at cruising speeds, and red when braking. Contrary to popular belief, only one car was made. It was merely repainted in different hues between show appearances.

First mooted in the late 1960s, it wasn’t until early 1971 that Ogle Design chairman John Ogier found a backer willing to fund a new styling study. Tobacco company W.D. & H.O. Wills picked up the tab, reasoning that the Sotheby Special (named after its brand of cigarettes) would be the perfect promotional tool.

With further sponsorship from Aston Martin, Triplex, Lucas and others, the prototype went on to be displayed within an all-British showcase at the 1972 Montreal motor show. Stylist Tom Karen, who is perhaps best known for his work with Reliant, let rip, its more unusual features including a chaise-longue in the back and 22 taillights. Two were made, plus a spare bodyshell/mock up.

If you’ve visited the British Motor Museum, in Gaydon, recently, the you’ll likely have seen the SRV (Styling Research Vehicle) on display. Given that Vauxhall isn’t exactly renowned for creating concept cars, it’s remarkable that the SRV was made at all. Even more improbable is that this mid-engined device was – cue disbelief – a four-seater ‘saloon’. Yes, really.

Styled by Wayne Cherry and Chris Fields, and first seen at the 1970 British International Motor Show at Earls Court, the SRV stood just 1041mm (41in) off the deck but was 5080mm (200in) long. Power, theoretically at least, came from a 2.3-litre slant four, while the SRV also boasted electrically-adjustable suspension. A particularly groovy feature was the instrument panel, part of which was fixed to a pod which hinged in unison with the driver’s door.

Pininfarina and Peugeot were once a marriage made in heaven – witness such landmark design classics as the 504 Coupé and Cabriolet. However, their fabulous little roadster, the Peugette, was never going to make the leap from concept car to production reality, but it had so much going for it.

The styling, by Diego Ottina, was distinctive, that’s for sure. The front and rear bodywork was perfectly symmetrical, with the roll-over hoop and fly-screen adding all the necessary racer reference points. Based on a Peugeot 104ZS platform, complete with a 66bhp, 1124cc four-banger, it had a top speed of just 96mph, but we so would…

Before the Esprit came ‘The Silver Lotus.’ Giorgetto Giugiaro designed this beautiful device with only limited input from Lotus itself. The Hethel firm provided a lengthened Europa platform and dummy ‘Type 907’ engine, but no funding. The wedge-shaped show car may have been inspired by the Italdesign boss’s Maserati Boomerang, but it owed rather more to his Porsche Tapiro show car from 1970.

Unveiled at the 1972 Turin motor show, this silver projectile was adopted by Colin Chapman as a production model, with in-house designer Oliver Winterbottom (a well-known proponent of wedgy styling) acting as intermediary. It marked the start of a beautiful, if occasionally strained, working relationship between Lotus and Giugiaro.

Displayed on the British Leyland stand at the 1973 British International Motor Show, the Minissima couldn’t have looked more disparate from the car displayed alongside it – the new Austin Allegro. The crisply-styled Minissima was conceived by independent designer William Towns, and represented his take on a replacement for the ageing Mini.

Remarkably, the prototype emerged some 750mm (29.5in) shorter than a regular Mini but it could accommodate four occupants, with rear-ferried passengers facing each other. The car’s angular bodywork comprised aluminium panels hanging over a tubular steel structure, with access via a single door at the rear. It was acquired by BL for evaluation, and the prototype still exists.

When we think of cars made behind the Iron Curtain, they tend not to be stylish, racy concepts. Skoda, however, wasn’t immune to such bourgeoise decadence. During the 1960s and early ’70s, it touted everything from two-seater roadsters to beach buggies.

The 110 Super Sport was something else entirely, though. Unveiled at the 1972 Brussels motor show, it boasted all the genre staples – a lift-up, one-piece canopy, pop-up headlights, and so on – but it would probably be forgotten by history were it not for what happened subsequently. It was given a makeover by Academy Award-winning costumer designer, Theodor Pištěk, and appeared in cult film, Ferat Vampire.

We’re all aware of the M1 supercar, but here was a concept that introduced many of the cues we saw on BMW’s famous wedge, and the idea came from the drawing board of former Mercedes designer Paul Bracq. With central tenets of both forced induction and safety in mind, he managed to sweet-talk the board into letting him build a prototype ahead of the 1972 show season.

Power would come from BMW’s enduring iron-block 1990cc ‘four,’ complete with turbocharger, which foretold the 2002 Turbo. As for safety, Bracq’s design incorporated deformable structures, a collapsible steering column and a roll cage. There was also an ABS anti-lock braking system. Another Turbo, complete with rear wheel spats (pictured), was constructed later.

First shown at the 1971 Turin motor show as an engine-less ‘roller,’ the Giorgetto Giugiaro-penned Boomerang ran under its own power by the time the following year’s Geneva motor show came around. That power came courtesy of a mid-mounted, 310bhp, 4.7-litre V8 driving the rear wheels via a 5-speed gearbox, with much of the running gear being lifted from the Maserati Bora production car.

Inside, the cabin boasted a number of left-field flourishes, not least the steering wheel arrangement which borrowed from prior Giugiaro designs. The instruments were clustered into a circular ‘dashboard’ which, in turn, was encircled by the steering wheel. The Boomerang continued to make show appearances up until 1974.

Unleashed during a period where concept cars generally tended to feature gullwing or scissor doors – maybe even a one-piece canopy rising up on hydraulic rams – the Zero’s one-upmanship stretched to a flip-up windscreen which lifted forward on hinges sited in the roof. The steering column tilted forward to enable access to the seats.

Once in situ, the driver simply pulled back on the column to close the hatch. The Lancia nose badge, meanwhile, cunningly concealed the pivoting handle that opened the ‘door.’ Once in place, the driver saw nothing but the road ahead, with the bank of instruments offset to behind the front wheel arch. The Zero was fully-functional, too, and probably just the thing for slipping under the car park barrier at the Hotel de Paris Monte-Carlo.

One of the most feted concept cars ever made, the irony here is that the Modulo wasn’t well-liked within Pininfarina in its day. It was given the green light in late 1969 only because the March 1970 Geneva motor show wasn’t far off, and the Turin firm had yet to start work on a new concept car.

Stylist Paolo Martin had been toiling away on his daring design after hours, so completing something that was part-way there was merely a pragmatic decision. The Modulo went on to earn 22 design awards and continued to earn its keep on the show circuit into the 1980s. Current owner Jim Glickenhaus is making the Modulo drivable. 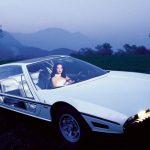