There was a sudden transformation of the tabletops in the smarter pub gardens across south-west London by the summer of 1985. Where once VW keyfobs had jostled for space among half-drunk spritzers, Marlboro cigarette packs and Oakley sunglasses, now the enamelled Peugeot logo was taking over.

You only had to visit the street or car park outside to see why. From a sea of red, white and black shiny metal winked the red accents and pepperpot alloys of the must-have car for the well-off man-about-town; the 205 GTI was starting to rule, tempting those rugby-shirted young bucks away from their Golfs like no hot hatch before, or probably since.

Britain’s upper crust, of course, were somewhat accustomed to crossing the threshold of Peugeot dealers, but usually to buy a 504 estate or, very occasionally, a 104 as a second car. The 205 of 1983, though, changed everything with its beguiling blend of crisp style, spaciousness, driving verve and economy. And that was just in its standard five-door form. The Fiat Uno might have been Europe’s Car Of The Year in ’83 but the Peugeot was the one everyone wanted. Little-recalled today, for example, is the transformative effect it had on the car market in small diesel form, and just how stodgy it rendered formerly big-selling rivals like the Nissan Micra and Austin Metro.

And then, a year later, came the GTi, and people up and down the King’s Road were hailing it – and they should know, the trendy bunch – as the spiritual successor to the Mini Cooper. The original version seemed, on paper, to be peppy rather than fiery, with its Bosch L-Jetronic fuel-injected 1580cc engine (already used in the otherwise drab Peugeot 305 GT saloon) producing 105bhp and maximum torque of 99lb ft at 4000rpm. Quite so-what in today’s terms, even though the deep front airdam and wide wheelarches had an instant allure.

But thanks to its combination of a rigid three-door shell, its elfin 900kg weight, probably the world’s best and most immediate steering, perfectly chosen gear ratios, fat alloy wheels on stiffened suspension, and a light, responsive throttle, the GTI’s driving experience rose above even scintillating.

Young Rupert or Charles only had to start browsing the eulogies in Car magazine to want one, and possibly with a bit of granny’s inheritance upfront the orders were duly placed. It was affordable, too, at around eight grand cheaper than an Astra GTE although there was NO WAY they’d ever be buying a Vauxhall anyway.

In stark contrast to decrepit old Coopers, or even a roadster from MG or Alfa Romeo, the GTI was as super-practical as any other 205, and roomy inside too, while the bright red carpet must surely have had its influence on those red braces and socks that gave the impression (in the wearer’s minds at any rate) of the renegade inside the sober New & Lingwood city suit.

The car was as adept at squirting around London as bounding across the rolling contours of Gloucestershire, the roadholding and steering constantly nourishing the goofy grin of the driver’s face. Peugeot even seemed to have tuned the GTI’s aural responses so that it was just raucous enough to alleviate Miles and Penelope’s passenger-seat prattle about chums photographed in this month’s Tatler. A young Sloane, of course, would always be eager to lap up the goss from the Berkeley Square Ball, but even that would be zoned out while nipping through the gears on West Country switchbacks. Who cared if it only had a cheap radio-cassette rather than one of those new CD players? You wanted to hear the engine growl, not Mark Knopfler.

Its only downside was the ride, which could be hard and abrupt in true go-kart style, and likely to generate hurt glares from loved ones sitting alongside and taken unawares at the bottom of a steep hill. With 0-60mph in 8.7sec it was a snappy little spaniel, and with all its reserves of low-down torque it was eager to spring absolutely everywhere. And the delicate accelerator always took time to master in the stop-start traffic crawling through Fulham.

The Peugeot was definitely a less-buttoned-up reincarnation of the original Golf GTi. It seemed to have all its exhilaration built-in from the start, unlike an MG Metro or XR2i, which were depressing pleb-mobiles with excitement stuck-on as an afterthought, rather like their trashy go-faster stripes.

The 205 GTi did anything but become irrelevant, as did some of its alternatives like the Fiat Strada Abarth 130TC or Renault 11 Turbo. In 1986 a modified cylinder head and bigger valves yielded an extra 10bhp, which subtly enhanced the performance and everyday enjoyment. But this was just a prelude towards the ultimate version: the 1.9 of 1987. The bigger engine now put out 130bhp, and the rest of the car had been upgraded too with disc brakes at the back too, beefier anti-roll bars, 15in wheels and suspension retuned to be ever so slightly more forgiving. The half-leather seats inside and considerably less painted metal also diverted attention from the 205’s tinniness.

The car mags were in heaven with it as they reported on the 7.8sec 0-60 acceleration and wild-man character, and soon the bars of The White Horse in Parson’s Green and the Admiral Codrington in Chelsea resounded to bragging rights about when the “One-Point-Nine” would be ready to collect from Warwick Wright on Chiswick Roundabout.

For the next six years, with the exception of the catalytic converter fitment in 1990 which chipped 8bhp from the power output, the 205 GTI 1.9 continued in wonderfully unsullied form (as did the 1.6, it should be added), classic as a Gucci penny loafer and likewise losing none of its desirability. From its scruffy eyrie in Earl’s Court, Car magazine declared the 205 GTi its car of the decade in 1990, and among the smart set of that time there would never be any disagreement. Perhaps it is some of them, still wearing the same old Barbour to cover up the paunch of middle age, who are now prepared to pay the £40,000 that the few survivors command to relive that youthful excitement all over again? 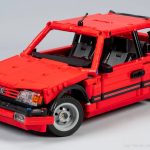 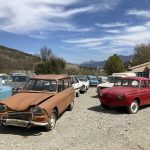