This story was first published on Insider, the Hagerty US site that brings insight and analysis to the enthusiast car market

We’re living in an era of effortless performance. The market for modern luxury sports cars has become increasingly crowded in the past couple of years, with vehicles boasting technical specifications and performance statistics that would have engineers falling off their chair just a decade ago. We wanted to compare them based on another set of figures: depreciation rates. Sure, many of these cars can do 0 to 60 mph in 3 seconds – or less. But we rather suspect most owners would be more concerned about which loses a quarter of its value in three years.

As is often the case at Insider, our quest for answers required a mix of setting out the goalposts and working through the data. Let’s position those goalposts first. What, for the purposes of this exercise, constitutes a luxury sports car? We have chosen the marques that have historically reflected the traditional European hegemony in this segment: Aston Martin, Audi, Bentley, Ferrari, Lamborghini, McLaren, Mercedes-Benz, and Porsche. We are not making a subjective statement about the qualifications of, say, a Nissan GT-R. Rather, we kept the definition narrow for consistency. Cars from other continents muddies the comparisons. We also decided to exclude roadster variants that are too rare to provide useful sample sizes.

The models we looked at typically cost at least $100,000 (£70,000) – but less than $500,000 (£350,000), excluding any optional extras. Each can be grouped into two categories, with apex flagship models and the more accessible starter offerings. Typically, membership to the apex model club requires 12-cylinders or at least 700bhp. The more accessible starter offerings usually have 8 to 10-cylinders and around 500bhp, although some are starting to creep up into the 700bhp range.

After categorising vehicles by marque, model, sub-model, model year, body style, and engine type, we calculated the losses. How do modern luxury sports cars perform in the used-car market, and which should you buy if you care as much about financial performance as you do performance at a track day?

The clearest takeaway is that all these cars depreciate. Typically about 6 per cent after one year, and 20 per cent after three years. It seems no amount of power, technology, or “specialness” can help a performance car completely escape the gravity that pulls down the values of new cars when they drive off a dealer’s forecourt.

That said, there are differences among the cars, depending on the circumstances of their launch and, it seems, where they come from. In terms of the launch of a new supercar, the hype that accompanies the introduction of these cars seems to be a double-edged sword. In some cases, it might create more initial demand than the factory is willing to meet, causing a blip of appreciation. For instance, the Ferrari 488 Pista Coupe was typically worth 6 per cent more a year after it launched as deep-pocketed enthusiasts tried to jump the queue. But even that isn’t enough to see it escape the financial ravages of depreciation, as by year three it, too, had fallen in value. However, here’s where it gets interesting. The Pista falls by around 7 per cent; a the opposite end of the scale, the 911 GT2 RS competitor from Porsche has dropped by a sobering 30 per cent. That knowledge is as useful for anyone wishing to make a saving and buy a used example as it is for those who want to avoid buying a car that will burn through their finances.

On the other hand, some cars with sizzling launches wound up depreciating more after the first year elapsed because they were purchased new at unsustainably expensive prices, perhaps driven by dealer markups and speculative buyers prepared to pay over the odds to jump that queue. For example, the recent Porsche 911 GT2 RS saw an average of a 12 per cent decline in the first year, likely because of buyers who paid over list price – the manufacturer’s recommended retail price – and sold soon after.

Geography matters, too. The Italians, Ferrari and Lamborghini, tend to depreciate less in three years than the Germans. The poor Brits, Aston and McLaren, depreciated by anywhere from a fifth to a quarter. The Bentleys we looked at are still less than three years old but seem to be on a similar trajectory to their countrymen.

Other observations: Porsche 911 GT3s (plotted as one model but calculated as separate GT3 and GT3 RS versions) show a bit more depreciation than the Turbo coupes, it seems due to increased speculation. Some buyers, perhaps, are still trying to capture the lightning in a bottle that was the 2016 911 R. The Lamborghini Huracán depreciates more modestly than its cousin, the Audi R8 5.2 V10. Generally, the convertible versions of the cars in the accessible set depreciate less than their coupe counterparts, except for the Mercedes-Benz AMG GT and Porsche 911 Turbo (remember, we excluded convertible variants that are very rare, like the Aventador roadster).

To be clear, depreciation doesn’t mean these cars won’t be collectable in the long term. There’s nothing here to say that tomorrow’s enthusiasts won’t lust after the McLaren 570S in the same way today’s collectors seek out yesterday’s used cars, like the 993-generation Porsche 911. However, for those who buy these cars new and move on shortly after to the next big thing, there are clear disparities to consider. And to those who pick them up hoping to make a quick buck: look elsewhere.

Special thanks to our partners who provided data for this analysis, including AutoTrader UK, Premier Financial, and Woodside Credit.

Hagerty Analysis: The Leonard Collection
Which classic cars are worth restoring?
Why homologation cars of the 80s and 90s are top gun 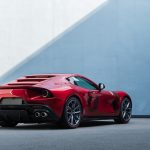