The Elkhart Collection is a dizzying whirlwind of automotive treasures

Most large collections of classic cars have some sort of theme. Whether it’s as specific as Ferrari Grand Prix cars or as broad as classic European cars with American muscle under the bonnet, there is usually an underlying current of taste or preference that guides a person’s acquisition choices. Then, there are rarities like the Elkhart Collection. With everything from vintage Ferraris to a 1948 Crosley ice cream truck, this collection of vehicles is as diverse as they come. If there is a single thread to find amidst the throng of supercars, prewar jewels, off-beat microcars, ’50s American metal, Japanese treasures, and more, it’s quality and care.

Located in Elkhart, Indiana, this stunning gathering of more than 240 cars will go to auction this autumn, through RM Sotheby’s, and nearly all will be offered without reserve.

Housed in a custom-built facility alongside a small airport, the cars shown here are on display in the main building, a massive structure set up as a showroom for entertaining, but there are also two hangars and a warehouse for additional vehicles. Hagerty visited the Elkhart Collection for a closer look at one of the most fascinating collections to come to auction this year, and RM Sotheby’s fired up three selections from the lot list for a bracing blast along the airport’s service roads.

Inside, the main building of the Elkhart Collection is stuffed with rows upon rows of cars. It’s overwhelming not just because of the volume, but because of the variety. As we glance across the huge room trying to get our bearings, colours jump out, lit from the industrial fluorescent lights above. Yellow Lamborghini Miura. Maroon ’37 Cord. Pale-green Cadillac Eldorado Biarritz. A closer look reveals that the high-value gems are surrounded by more bread-and-butter classics that make up the bulk of the collection. Olive drab ’45 Willys. Magma orange Opel GT. English white ’67 Lotus Cortina with a familiar green stripe. From the priciest to the most pedestrian, each is well-preserved and appears to be regularly exercised. According to RM Sotheby’s Chief Operating Officer Alain Squindo, many were driven over the summer, enjoyed, and several were raced. As recently as February of 2019, there were still new cars being added.

Before we can spend more time ogling every last lot, the untamed grunt of a Jaguar straight-six wakes up. It’s stirring within the luscious curves of a 1955 Jaguar D-Type continuation car, one of 25 all-new examples built to “complete” Coventry’s planned run of 100 cars that was cut short when the factory burned down in 1957. It’s a 3.4-litre mill with triple Weber carbs, built to the specification of the early short-nose cars from 1955, before displacement grew to 3.8 litres the following year.

Painted in Scottish Racing Blue, the D-Type is magnificent to look at and even better to hear running – restless and angry at idle and positively alive as it rolls out of the building and heads toward the nearby runway.

In its wake is a 1968 Iso Grifo GL Series I by Bertone, complete with a period-correct 7.0-litre Chevrolet V8. Although the engine is not original to the car, it roars all the same when you turn the key. Much deeper and throatier than the Jag’s six, the Iso is full of personality when seen in person. The butterscotch-coloured interior was redone in 2015 and has a real warmth to it, which we can only imagine is best enjoyed with the rare factory Pavesi sunroof open. (It’s a removable dual-panel roof.)

While it, too, is painted in a bright shade of yellow, the wacky 1960 Messerschmitt F.M.R. Tg 500 “Tiger” makes a statement wholly its own. This microcar is fun just to be around even at a standstill, with its round nose, protruding headlights, and clear bubble top. The persistent clatter of its two-stroke, 494-cc two-cylinder engine might seem puny after hearing the Iso’s big 427 thunder out of the garage, but in the context of microcars the Tiger was one of the fastest, with a top speed of 78 mph.

Seeing these three cars out on the move was a highlight of our visit. The Jaguar pops and sputters at every opportunity from its wicked side-exit exhausts, and you can see the rear end getting a little squirmy on the cold road surface and old-school Dunlop tires. The Iso has the attitude of a pure muscle car and the looks of a tasteful Italian GT car with a bad attitude, blasting up and down the short runway to the delight of several airport workers.

No F.M.R. Tiger sighting, of course, is complete without a smile from each onlooker as it zips by on those four little wheels, the driver looking like he’s jumped into reality from some 1950s cartoon. Every vehicle looks, sounds, and smells different, and the breadth of the Elkhart Collection’s available sensations was on display with these three cars alive and, albeit briefly, in action.

Of course, we’re only scratching the surface of the auction lots by focusing on these three cars. The full scope is mind-blowing. We were particularly struck by the Touring-bodied 1955 Hudson Italia, 1955 Ferrari 225, 2010 Alfa Romeo TZ3, 1967 Toyota 2000GT, and 1960 Fiat-Abarth 750 GT Zagato. And if the D-Type continuation car wasn’t enough old-is-new vintage Jaguar for you, continuations of the E-Type Lightweight and XKSS are also part of the sale. In addition to these big-ticket items, the collection has true oddballs: a Subaru 360 done up like a New Zealand police car, a 1936 White Model 706 tour bus that served in the Yellowstone National Park fleet, and a 1958 Goggomobil TL-250 Transporter rendered in a “Dubble Bubble” chewing gum theme.

In addition to the cars, the Elkhart Collection features motorcycles, trucks, trailers, all manner of memorabilia, and more, with 567 lots in all. And in case you’re wondering, RM Sotheby’s will keep the consignor’s identity anonymous.

While originally scheduled for May, the COVID-19 pandemic has delayed this auction until October 23–24. Unlike RM’s other recent auctions, the Elkhart Collection sale will remain in person, rather than online.

Take a tour of the Red Room, the crimson jewel of the Haynes Motor Museum 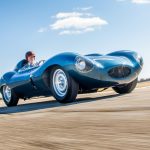 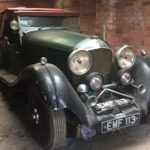 The Lure of the Pre-War Car 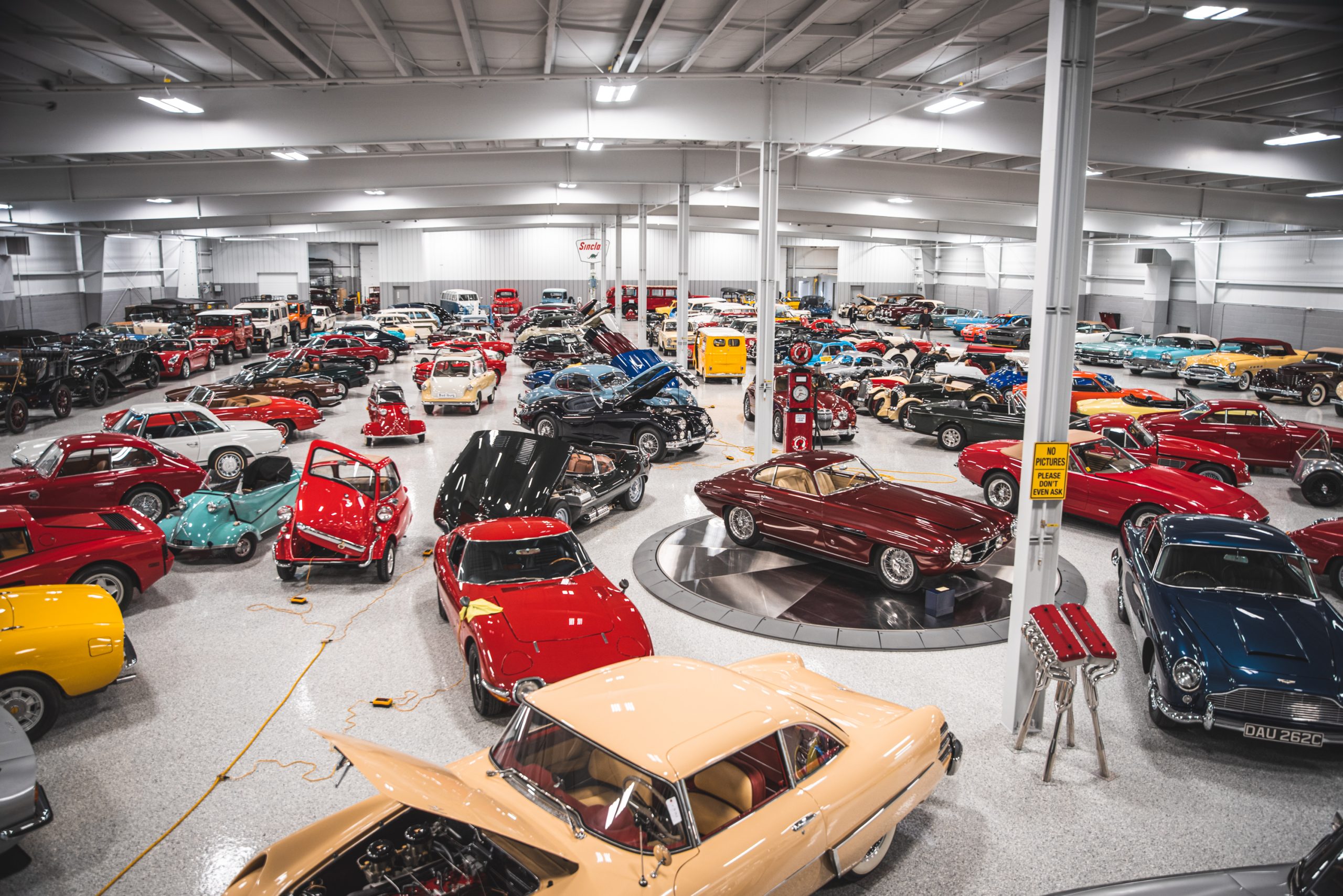 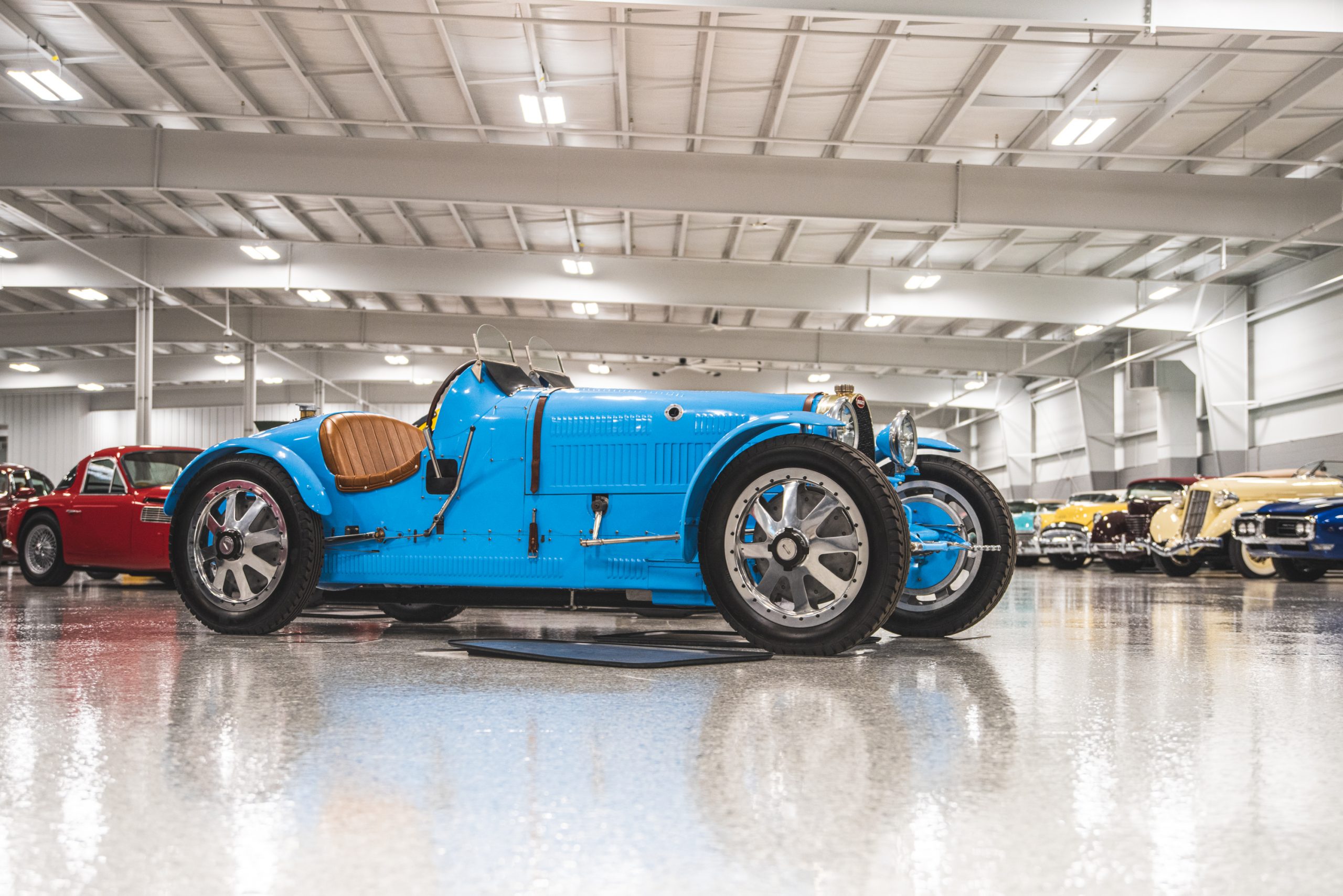 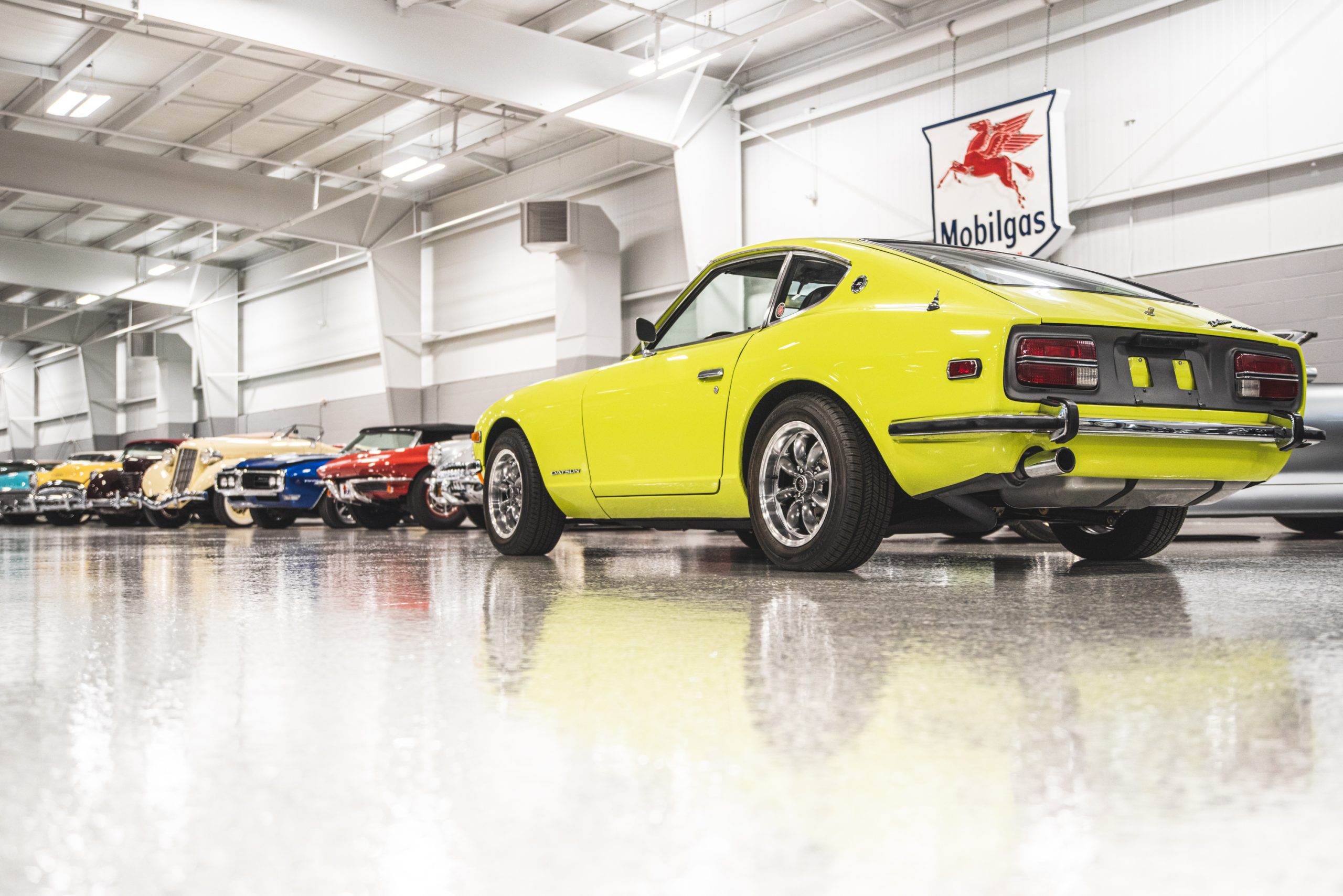 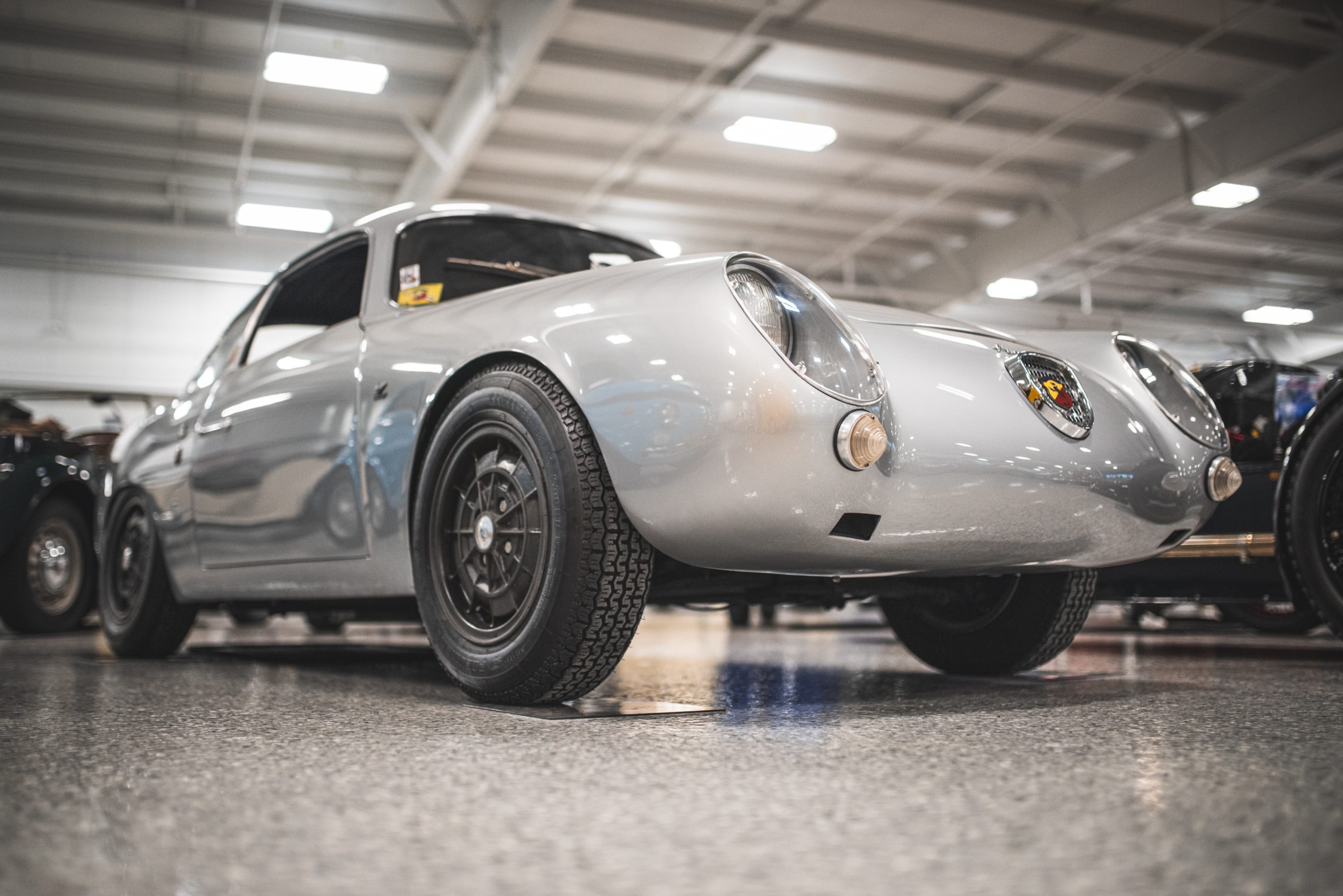 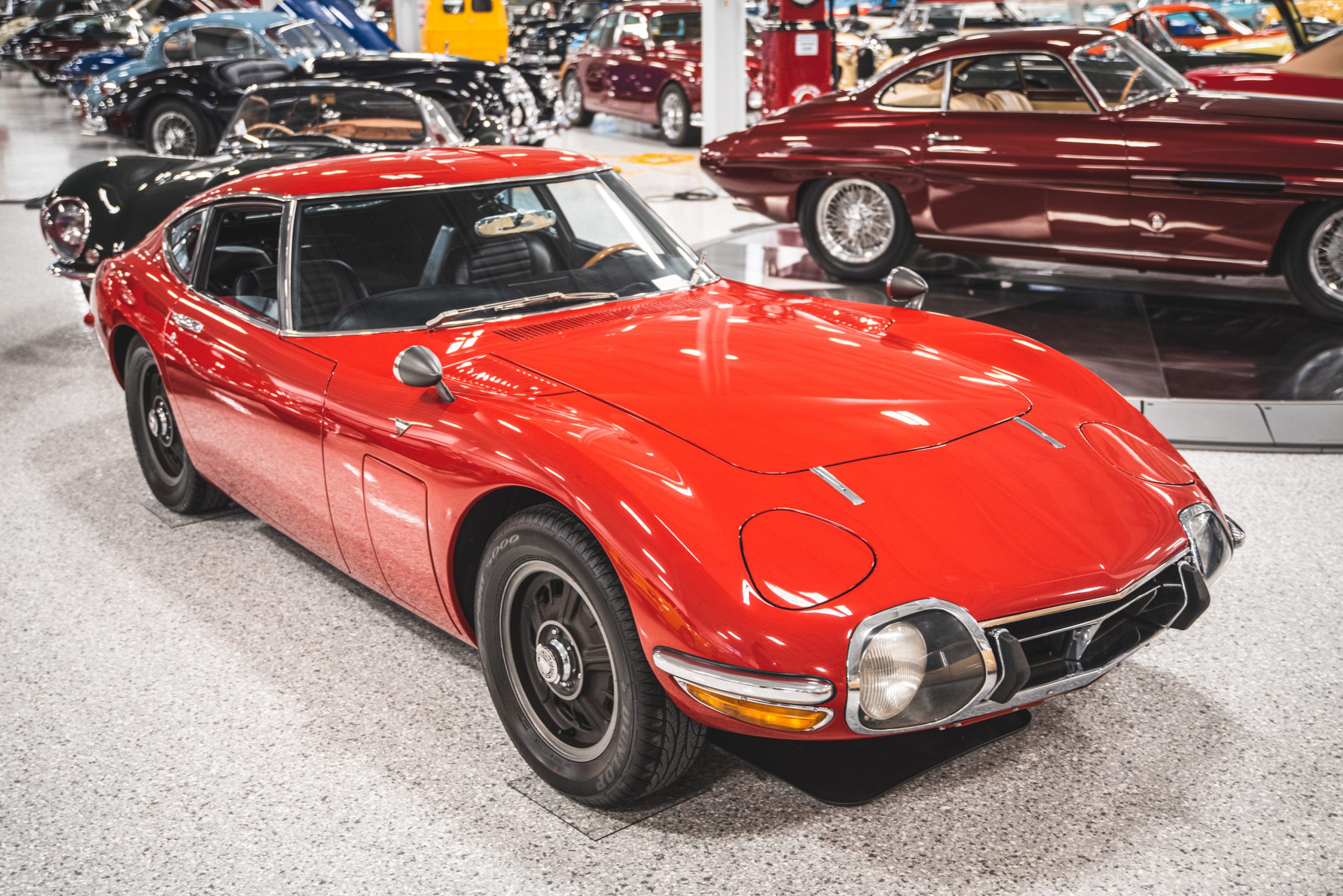 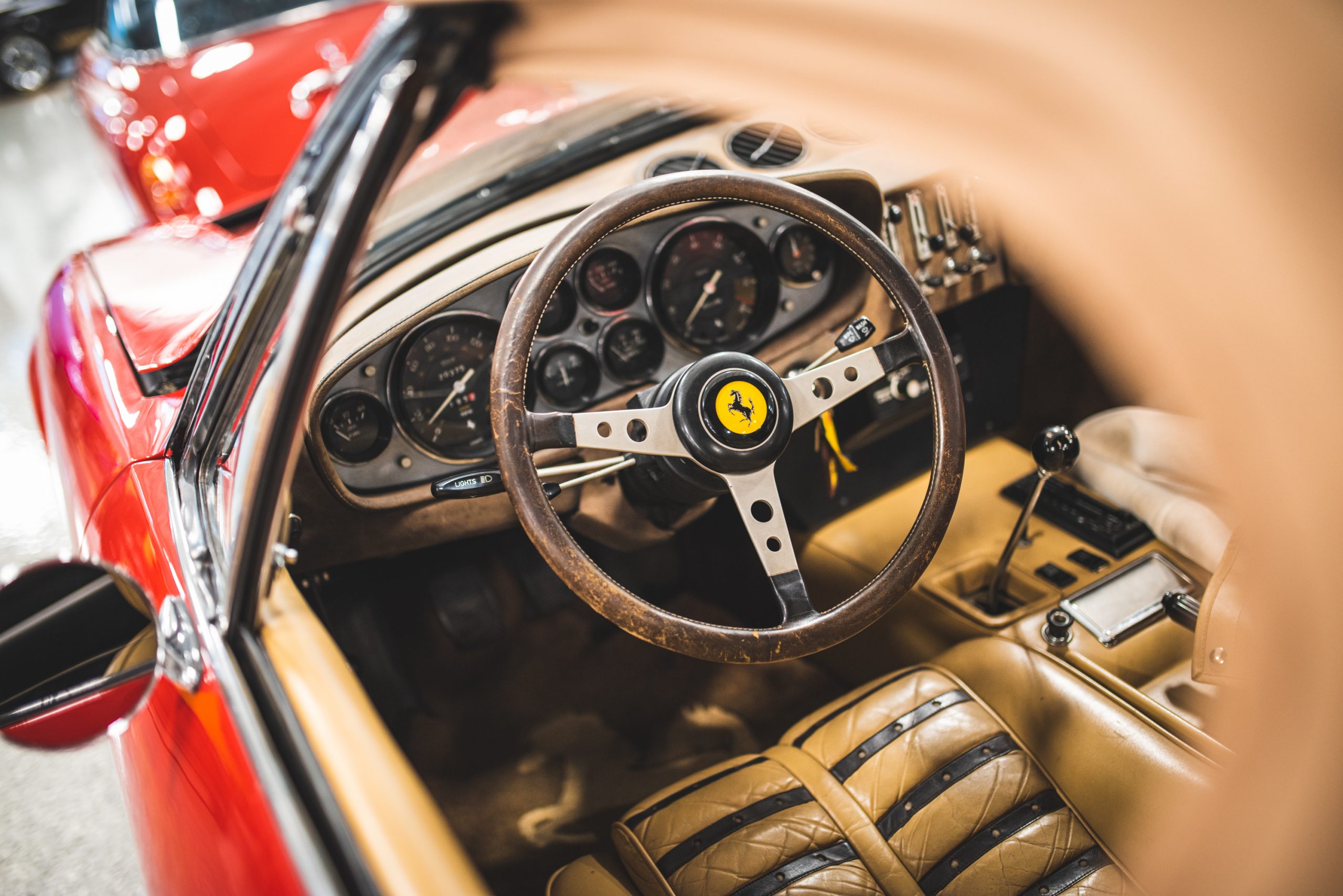 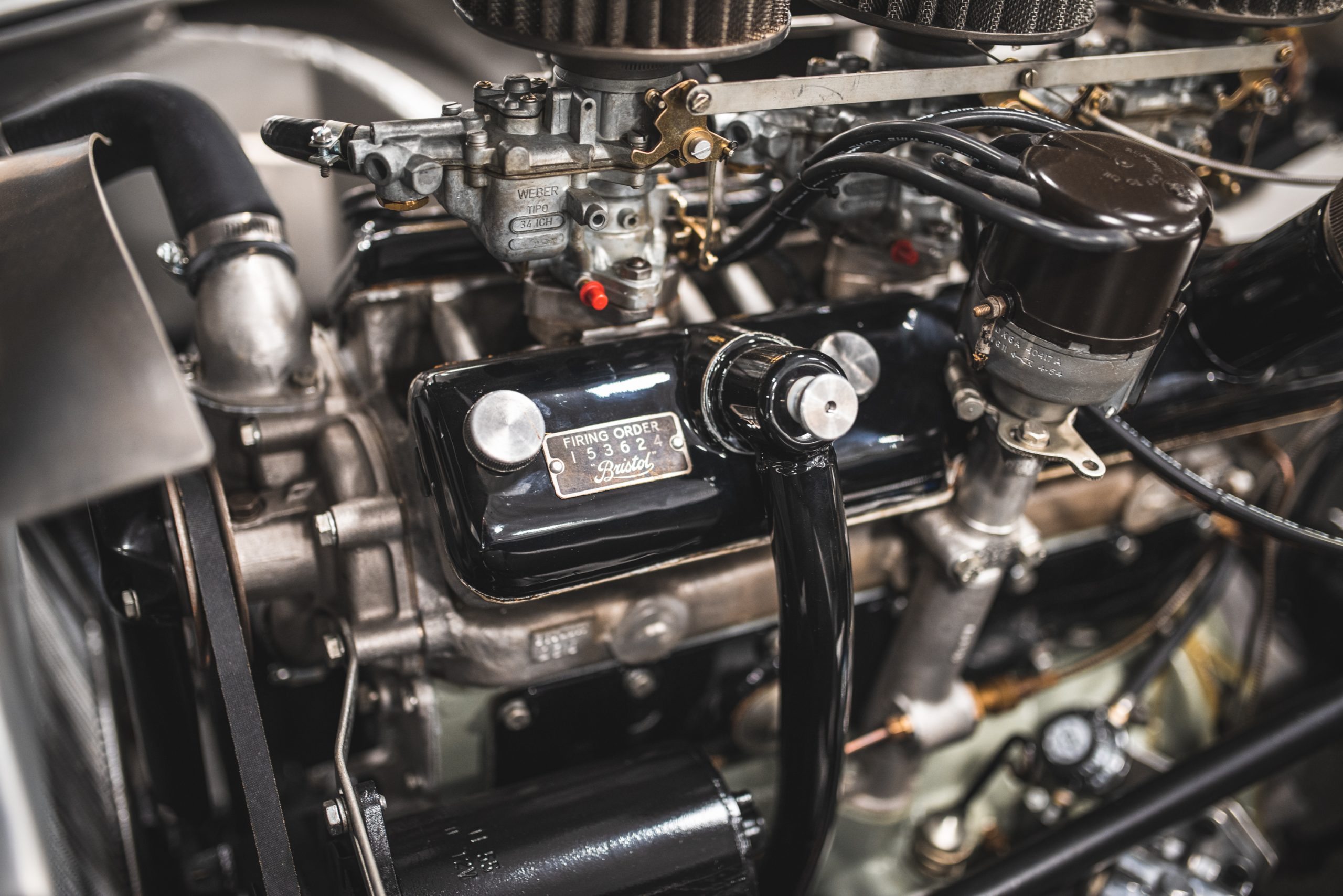 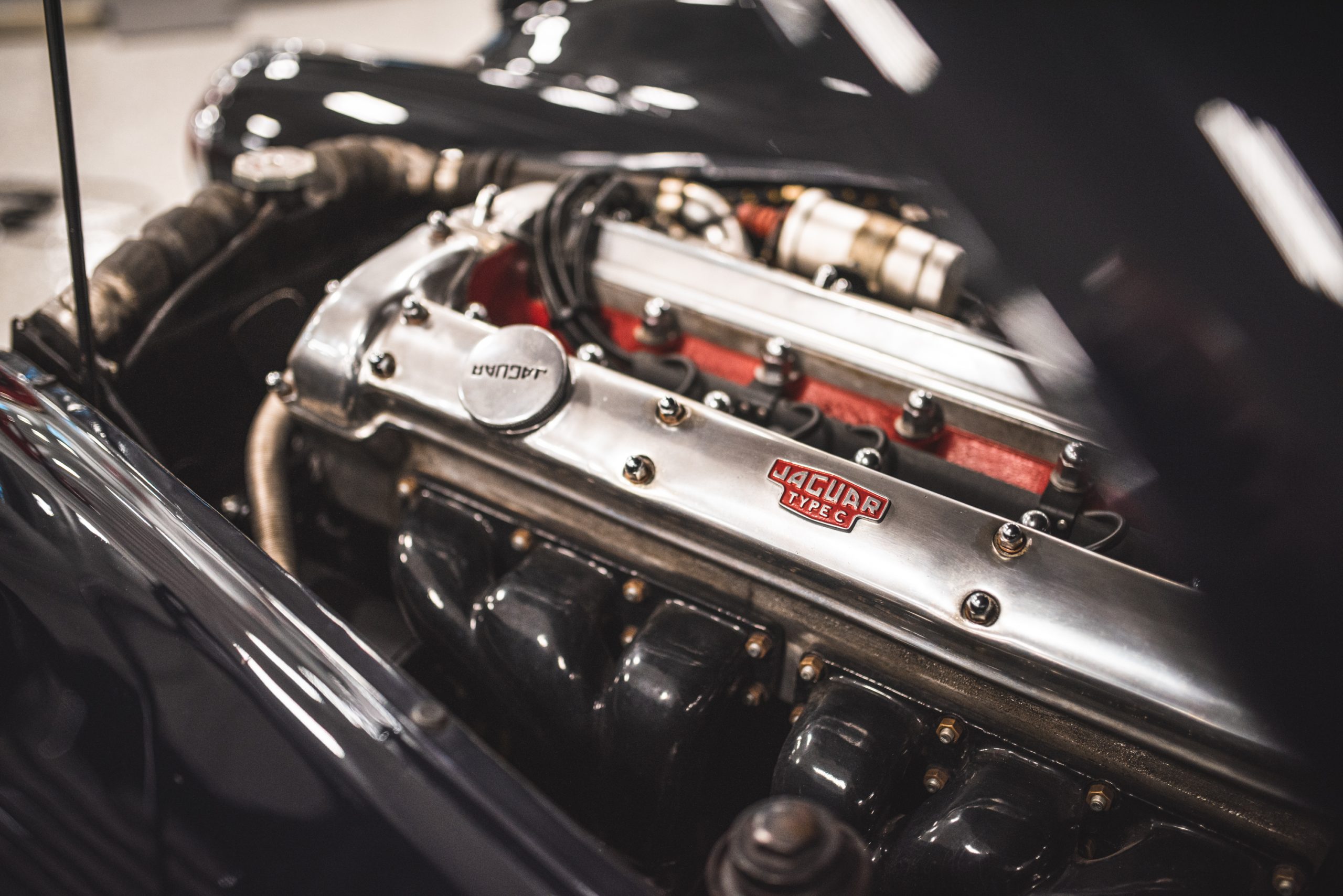 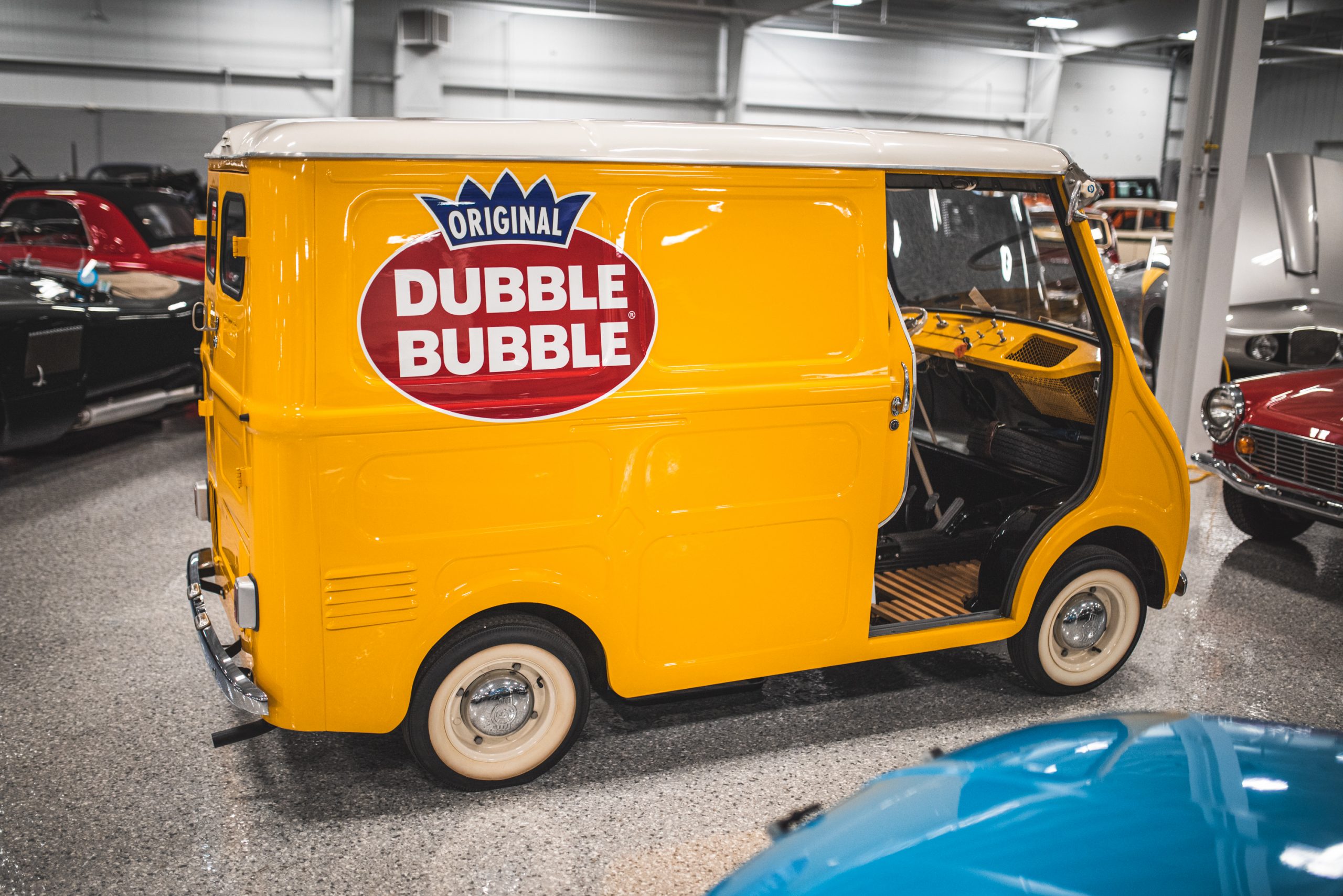 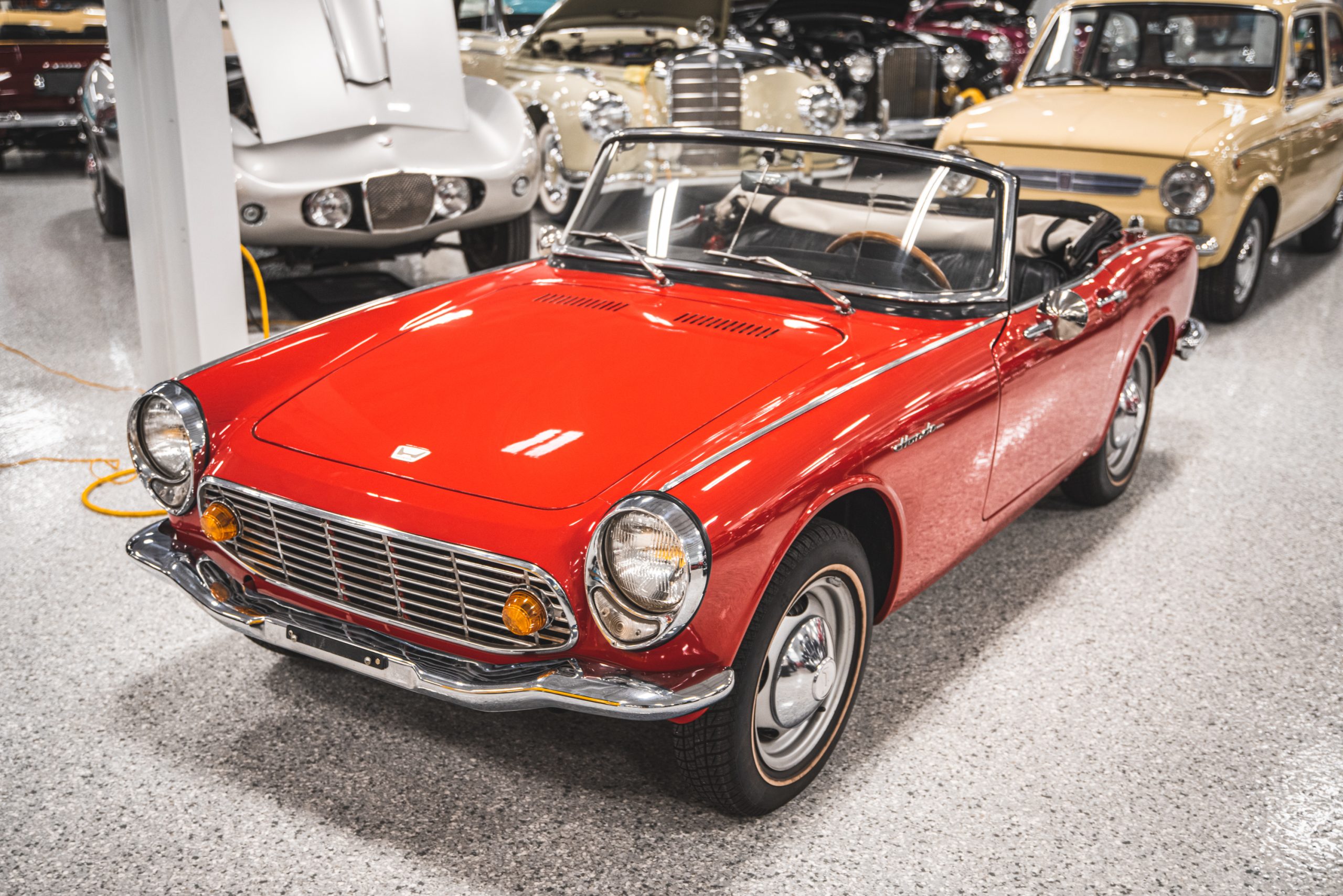 A story about
Auctions Valuations