A flight of tiny Messerschmitt microcars could be yours

In post-war Germany microcars briefly ruled the roads. BMW, Heinkel, Goggomobil and many more produced these tiny, economical two-stroke bubbles-on-wheels. Messerschmitt could never quite move on from its aviation past and its tandem cockpit designs and tiller steering make them the most unusual of the era.

Messerschmitt’s first model was the 1953 KR175. KR stood for Kabinenroller, a scooter with a cabin, and that’s really what the KR175 was. It had a single-cylinder, 173 cc, two-stroke engine driving a single rear wheel, just like a scooter. And it sat its two occupants one behind the other, also like a scooter. A twist-grip throttle on the handle bars and a single brake pedal were also very familiar to riders of the day. Only the side-mounted gear selector with attached clutch lever required a bit of getting used to. The biggest difference was the relative luxury of an enclosed cockpit. And it really was a cockpit, with a side-opening plexiglass canopy, just like a fighter plane. Very cool, until, like my uncle, you manage to tip your Messerschmitt onto its side in the snow and can’t get out.

The RM Sotheby’s Messerschmitts are later models and the selection includes the rarest of them all.

Fitted with a larger 191 cc motor the KR200 took over in 1955. The suspension was redesigned and included hydraulic shocks for the first time. Bigger tires were fitted and there were cutouts in the front fenders for a better turning circle. This model has been restored and even signed by Fritz Fend, the engineer behind the car. It also features accessories such as a sun visor, clock and luggage rack. My father once managed to strap a go-kart to his, so it’s surprising how much you can actually carry. You can expect to pay $50,000 to $75,000 (£39,000 to £59,000) for this fetching red example.

Mechanically the same as the KR200 the Kr201 Roadster had one main difference—a canvas roof. It folded away into a pram-style bulge and side windows would be manually clipped in. This 1958 Roadster is finished in aquamarine with faux-snakeskin trim inside for some reason. It’s offered without reserve but expected to achieve the same price as the KR200.

To this day my father still regrets not trading up to the Tiger when he had the chance. Fitted with a 494 cc motor and four wheels, it was the über Messerschmitt and only 320 were made. It would accelerate from 0 to 60 mph in 28 seconds and had a top speed of 78 mph. Only 320 were made and just 150 are believed to survive. It’s no surprise that this very rare microcar is estimated to fetch as much as $250,000 (£197,000).

Small Miracles: BMW Isettas were the best-selling 1950s microcar and the only one made by a company that still exists 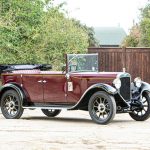 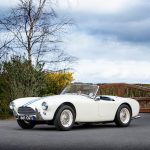