The world might be changing but one thing has nearly always remained constant: If you want a powerful and tightly-constructed executive car to convey your taste and status, you’ll probably end up on the doorstep of either Audi, BMW, or Mercedes-Benz.

Other brands have challenged the Germans now and then, from Jaguar to Lexus to, today, Tesla Motors, but few have made real impact into the sales of cars like the BMW 5-series and Mercedes E-class, while fewer still have challenged the autobahn-storming performance variants.

That’s not to say they haven’t tried, and during the 1980s and 1990s, you were almost spoilt for choice when it came to swift, refined and often stylish alternatives to the Bavarians and Swabians. From the pert Alfa 164 to the flying Volvo 740 Turbo, here are seven rapid execs that didn’t require a German badge.

Giuseppe Busso’s 60-degree V6 has become something of an automotive meme, shorthand for six-cylinder musicality in the same way a Mazda MX-5 is the answer to everything or a Ford Mustang is only a car show exit away from spinning off the road. The way people describe it, you’d think the Busso makes any car it touches perfect.

That wasn’t quite the case for the Alfa Romeo 164 Cloverleaf, which struggled with torque steer in its earlier iterations and was fitted with a gearshift that offered little in the way of pleasure either. But Alfa worked at it, and by the time the 166 replaced the 164 in 1998, it had been refined into a truly compelling package.

There’s the Pininfarina styling for one; German rivals were often handsome, but rarely pretty like the Alfa. The Busso pulled hard too, its 200bhp enabling a top-end of nearly 150mph, and could offer a useful mix of twisty-road entertainment and long-distance comfort.

French car companies were among the first to adopt turbocharging for the masses. And just like today’s cars, it often proved startlingly effective. Take the Citroën CX GTi Turbo, which combined rapid performance with Citroën’s more traditional qualities.

Yet the car didn’t go without the CX’s remarkable ride comfort, nor other CX characteristics like an enormous and low-slung cabin and barmy dashboard – though GTis got more conventional instruments than lesser CXs. And, if the quick CX was just a little too thirsty, then Citroën could offer you a CX with a 121bhp intercooled turbodiesel too.

One of three “Type 4” collaboratively engineered cars on this list – the others being the Alfa Romeo 164 and the Saab 9000 Aero – Lancia went a rather different route with its M5-baiting executive saloon. It used its ties within the Fiat group to liberate a 90-degree V8 from Ferrari… before dropping it in the Thema’s nose to power the front wheels.

No, not the most obvious of choices, but it made the Thema 8.32 that resulted (eight cylinders, 32 valves) a unique car both in period, and to this day. In fact, it was unique even in the engine bay, since Lancia swapped the Ferrari’s flat-plane crankshaft for a cross-plane crank, to the benefit of refinement and torque at the expense of top-end power.

The Thema was trimmed like a true luxury car, even if the strips of wood and leather weren’t assembled quite as precisely as some northern European equivalents. No faulting the performance though; a 0-62mph time of 6.8 seconds was well inside BMW M535i territory. And the BMW didn’t give you a little electrically-retractable spoiler on the bootlid…

Rover’s 800 series has never attracted the following of its earlier SD1. Its styling isn’t quite as distinctive, it sends its power to the “wrong” wheels, and its most potent models didn’t quite have the right number of cylinders.

In fact, the quickest 800, the 820 Turbo 16v, had only half the cylinder count of the burliest SD1s, but that didn’t seem to matter much, at least on paper; with input from tuning firm Tickford, the 2-litre, four-cylinder turbo models made 177bhp and 159lb ft.

That former figure, incidentally, was the same as the 2.7-litre Honda V6 also available. But at 8 seconds flat the Turbo was nearly a second quicker to 60mph, and added 5mph with its 137mph top speed too. Strong mid-range made it usable (if not as refined as a German straight six or V8), while a classy-feeling cabin played the executive card to a tee.

Saab had nailed turbocharging by the time the 9000 Aero came along in 1993. It had dabbled with forced induction since the 1978 99 Turbo, and strapped a snail to every model since, but electronic control and other advancements gave Saab’s 1990s turbocharged output startling potency.

The 9000 Aero was the ultimate incarnation of the 9000. Using a 2.3-litre engine it made up to 222bhp and 252lb ft through a manual gearbox. The 6.7-second 0-62mph time buries the lede somewhat, as it was the mid-range where it really scored: Autocar said the limited-run Carlsson model was ‘as quick from 50-70 in fifth as any production car we’ve tested’.

It wasn’t, it must be said, a corner-carver. Mixing that kind of power with Saab’s promise of a relaxing drive resulted in overly light, feel-free steering, and even that couldn’t mask the torque-steering effects of sending everything through the front wheels. But for motorway might, little could top it.

It’s the Lotus that gets all the column inches, but there was another strong performer in the Carlton club: the GSi 3000. Equipped with a three-litre straight six and wearing distinctive bodykit it lives in the shadow of the 176mph Lotus Carlton – but also ensured it could exist.

After all, Vauxhall and Opel’s short-stroke inline six formed the basis of the unit in the Lotus, and while a power output of 178bhp is around 200bhp shy of what Hethel achieved when it stroked the motor out to 3.6 litres and strapped on two turbos, just think how smooth and understressed the injected six must have been in the GSi.

And the chassis was fundamentally good too, drawing praise for its easy-going performance and balanced behaviour; John Barker ran one for Performance Car back in the day, and preferred it to the mag’s Sierra Cosworth, since the Carlton was less on-off and ‘adapts itself to your chosen pace’.

Volvo forged its “flying brick” reputation with the 240 Turbo and its exploits in saloon car racing, but the 740 Turbo took the tag and ran with it – giving us some of the best car advertising copy the world has ever seen in the process.

Seriously, every ad was genius, from one placing the car alongside a Testarossa and claiming “Until Ferrari builds a wagon, this is it”, to another showing a Countach with a trailer behind it and stating “The basic idea behind the Volvo Turbo Wagon”.

Naturally, most of the ads focused on the practical estate, though both saloon and wagon got a 2.3-litre, intercooled turbocharged four-pot with up to 170bhp in UK variants. Doesn’t sound like much today, but still enough for 0-60mph in under eight seconds. With or without your Labradoodle in the back. 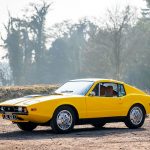