Can it be so? The 2022 Hagerty Festival of the Unexceptional is just over a month away, which means we have had to lift a finger, make a cup of tea, lift another finger – this time, a chocolate Fingers, or five – and work our way through the entries for the sort-of-world-famous Concours de l’Ordinaire.

A total of 50 marvellously mundane motor cars will once again take to the gravel-laid catwalk that is the inner courtyard at Grimsthorpe Castle, in Lincolnshire, flaunting their steel wheels and plastic hubcaps, teasing us with switchgear blanking plates, and inviting a touch or two of their ruffled velour upholstery.

No ordinary car show, the competition will, as ever, be fierce. As ordinary as these once-unloved but now much-loved everyday cars are, they are prepared to the highest of standards and the judges will be casting a critical eye over everything from the shine of an unpainted plastic bumper to accompanying period sales literature. Survivors with sob stories will vie with rejects saved from the dreaded scrapheap.

So without further ado, we’ve highlighted 10 humdrum cars that will make up some of the 50 competing for concours honours at the 2022 Hagerty Festival of the Unexceptional. We look forward to welcoming show goers.

Fiat aimed for the back of the net with the special edition of the Panda, which appeared in 1990 to mark Italy’s hosting of the World Cup and Fiat’s sponsorship of the tournament. The designers scored their first goal with those hubcaps, before sinking another with the Azzuri Blue interior, which matched the national colours of the Italian strip.

Not content with resting on their laurels, they then had a dig at the pinstripes, running the length of the car’s shoulders and matching the colours of the Tricolore, before lobbing the keeper with the Ciao man logo, which has reportedly been voted the best world cup mascot of all time. For UK models, the Panda Cup was based on the 750cc Panda L, and there are thought to be just a handful left on the road [pitch, surely, if we’re continuing with the terrible puns? Ed]. This one was registered on the day England beat Egypt, 1-0, but reportedly once England was knocked out of the tournament (Italy finished third, by the way) Fiat removed all the graphics and hubcaps and returned them to L spec to try and shift all 475 in stock – a red card offence, surely?

We love a story that pulls at the heartstrings, and the tale of this Fiesta Fanfare is just that. The first owner, a lady by the name of Irene, bought the car in 1992 and took great care of it, using it day in and day out but always putting it away in the family home’s garage at the end of each day, before opening the door and bringing it out to do another day’s duties.

However, once Irene reach the age of 87, she decided it was time to give up driving. By the time the second owner of the Fanfare took on custodianship of Ford’s special edition Fiesta, it had travelled a mere 16,500 miles. Every year, reportedly, the car was sent to the same dealer for its MOT and servicing, and every little job is documented in its history file that Irene handed over with the car. Being a Fanfare, the five-door model has keep-fit winding windows, manual locking and a 1.1-litre, carb-breathing engine, while the finishing touches – truly, the fanfare – were burgundy paint, rose-gold pinstripes and a boot spoiler.

We’re rather hoping spectacularly rare Mazdas become a bit of a Festival tradition. Last year, a 1982 Mazda 929L estate found its way into the concours, and this year we’ll see a 1971 Mazda 1800 on the lawn – a car so rare that even the most ardent fan of the unexceptional might struggle to recognise it.

You may be more familiar (if only slightly) with one of the cars spun off the 1800’s platform: the Mazda Luce coupé, the company’s only front-wheel drive rotary model but also one of its most beautiful. This 1800 is a saloon, but it too was styled by Bertone (will that count for it or against it in the judge’s reckoning?). It’s thought to be one of only three in the UK, as well as one of the earliest surviving imported Mazdas. However well it ends up scoring, this is sure to be a highlight for visitors.

How the mighty have fallen; the owner of this Renault Mégane Scénic points out that Renault’s small MPV was given the European Car of the Year gong in 1997, yet their survival rate is distressingly low today. Just eligible for the concours this year, it was an obvious choice given its ubiquity back in its day, filled to the brim with kids and clobber on their way to a holiday in France. And a rear window full of sliced bread, for some reason, from the families who apparently didn’t realise France was quite good at the whole bread thing.

With only 60,000 miles this is probably about as clean, original and unmodified a Scénic as you’re likely to find, and will surely be as nostalgic for those who used to ride in the back seats as it is for owner Chris, who snapped this car up having wanted one as a kid. Keep an eye out for the genuine Renault teddy bear in the car, too…

“My little Astra is basic, slow, and about as exciting as a Post Office queue,” says the owner of the 1994 Astra Merit you’ll see in this year’s concours, “but regardless I adore it!”. That’s exactly the kind of attitude we like to see, the kind of performance we like to hear about, and as prime mid-Nineties automotive street furniture, we’re quite fond of shapes like the Astra too.

Vauxhalls of this era quite often get the short end of the enthusiast stick, the Ford versus Vauxhall battle often falling in the Blue Oval’s favour. Each brand had their fans, but in the ’90s, Ford quickly gained the upper hand in magazine road tests. But they still engender plenty of love from some drivers, and this isn’t the first time we’ve heard an owner say they’ll never sell it. In Merit trim with a modest 1.4-litre engine, it’s pretty much the perfect unexceptional spec, too. That wheelarch blister was always a nice touch, don’t you think?

AZLK is a Soviet and now Russian car maker that started peddling its wares in 1930, albeit making Fords that were shipped out in component form. By 1939, a new name was called for, something a little more catchy than Avtomobilny Zavod imeni Leninskogo Komsomola, and lo Moskvitch – meaning Moskower, someone from the capital city – was dreamed up.

This particular model, a humble 2140, dates to 1986, making it a late one as production started in ’76 and ended in ’88. It was brought to Britain from Lithuania and is famous and everything, having featured on the TV show Bangers & Cash! Its yellow and brown paint is perfectly Eastern Bloc, the 1.5-litre engine drives the rear wheels and its interior is, well, as austere as one would expect. There was even a homologation spin-off, the Moskvich 1600 Rallye, but let’s not get carried away. It’s the standard 2140 that will have star power at the 2022 Concours de l’Ordinaire.

‘A wallowy cornering gait, a super-smooth ride and the pleasing whine of its straight-six’ is how the owner of this bronze Adonis, sorry, Leyland Pricess 2000 describes their pride and, er, joy. And what a colour it is, perfectly chosen – perhaps unwittingly, perhaps deliberately, time does not record – to hide any patches of rust that may come to develop over the car’s lifetime (long since addressed).

The Princess was designed by Harris Mann, whose other – some might say – crimes against carmanity include the Allegro, Princess and TR7. The 2200 version is rather posh for the Concours de l’Ordinaire but goodness, we simply had to include it so you too could admire its resplendent brown velour upholstery, take in just how well the colour-coordinated brown plastic has withstood the ravages of age and marvel at its spacious cabin. With only 16,000 miles on the clock, we look forward to seeing this survivor in person.

We reckon this 1969 Reliant Regal will be a bit of a fan-favourite at the Festival. How could it not? It’s one of the most recognisable British classics, has a perfectly downtrodden image thanks to being the butt of numerous jokes over the years, and in a hand-picked shade of – and these are the owner’s words – B&Q turquoise, is painted like a 1960s bathroom suite.

Frankly, it’s good to see a Regal that’s both a) the rare saloon, and b) not done up like an Only Fools And Horses prop for once. People forget that these were once relatively common, everyday transport, just as a Mini was. They’re just less widely loved – and that means the odd-wheeled Regal should fit right in to this year’s concours. And it won’t need a very big space to fit into.

Like the Renault Scénic elsewhere on this list, the first generation Ford Ka is another car to have recently become eligible for the concours. It too has quickly disappeared from our roads, holding the dubious reputation as one of the most rust-prone cars of the decade. Time, iron oxide and the cruel scythe of the MOT tester have seen the end of many.

Which makes it all the more remarkable that the one you’ll see at this year’s Festival isn’t just an early car, but built in September 1996, one from the first month of production – and apparently one of only 14 first-year cars that survive. How it survived unscathed is something we’re all desperate to find out, and given the Ka’s stellar reputation as a handler – a true successor to the original Mini – few Concours entrants will be more fun on the drive to the show. This one’s sure to find fans, but will our judges agree?

If, like us, you can remember when Hyundai started selling cars in the UK, and how comfortably the critics dismissed them, and now you consider the Korean company’s cars to be the equal or better of anything Ford or Volkswagen make, we suspect this 1992 Lantra – sold a decade on from Hyundai entering the UK market – will transport you back in time to when that complacency cost Europe’s car makers dear.

A three-owner example, it looks positively radiant to our eyes. That paintwork sparkles like the Azure Sea, the grey velour interior fabric perfectly complements a period Burtons suit and the 16-valve, 1.6-litre engine speaks of sophistication, Its GLSi trim meant steel wheels and no air conditioning, which must have made it the short straw in the company car sweepstakes – and perfect for the humble Festival of the Unexceptional. 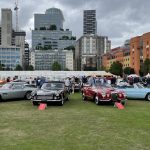 London Concours gallery: Concepts and JDM classics shine in the City
A story about
Concours Festival of the Unexceptional Lists Unexceptional classics