That record was attained eight years earlier, when he cleared the fountains at Caesar’s Palace in Las Vegas – one of the most famous jumps of his career, in perhaps the location most befitting of his showmanship.

One important distinction separates the jump at Kings Island though: Knievel landed it. In Las Vegas, he instead ended up a crumpled heap, followed by 29 days in hospital and enough broken bones for a macabre Halloween display.

Yet the successful jump at Kings Island almost didn’t happen.

Five months earlier, Knievel had set up another Vegas-style spectacle, but this time in front of a crowd of 80,000 people at Wembley Stadium. 13 buses were lined up, side to side, on the famous turf. Knievel, riding his customary Harley-Davidson XR-750, had already admitted to a friend he didn’t think he could make the jump.

True enough, after soaring high he landed short, bouncing and tumbling down the ramp with his motorcycle and breaking his back and pelvis. Amazingly, he was still conscious, and as Cameron Neveu wrote in Hagerty’s ‘Evel Empire’ feature, asked to be propped up on the ramp to deliver a message to the crowd. That message was that he had made his last jump.

That promise lasted about as long as the flight home, Knievel committing then and there to his jump at Kings Island.

Astonishingly, it would be over one more bus than he had attempted in London. 14 Greyhound buses were lined up shoulder to shoulder, the landing ramp positioned over the final couple of roofs.

While showmanship defined Knievel’s career, footage of the jump looks almost routine. He throttles up to little fanfare, giving it an extra squirt before takeoff, and comes down again on the back wheel, landing on the roof of the final bus. No drama, no broken bones, no more promises of retirement – though the Harley did suffer a snapped frame.

Nevertheless, Knievel’s career was now winding down. He scored two more successful jumps a year later, before jumping the shark – literally, that is, 13 of them – in Chicago in early 1977. As well as providing a handy metaphor, it was also unsuccessful; Knievel didn’t end up as fish food, but did crash in practice, breaking more bones.

Knievel made further appearances to jump in subsequent years, but never did. The Kings Island jump would forever stand as the longest jump he landed. Others have gone further, of course. But have you heard of them? 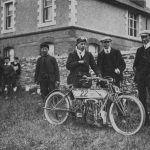