I’ve been lucky enough to attend many of the great concours d’elegance around the world, as a journalist, as a judge, even on a few occasions as an entrant. (Whisper it: on my desk there is a stylish trophy from Pebble Beach, probably the most prestigious concours in the world.)

From Villa d’Este to Amelia Island, from Copshaholm to Chattanooga, these events are graced by some of the world’s most stunning and desirable pieces of automotive art. Many have been restored with meticulous sympathy and understanding to exactly how they were when they first turned a wheel. In preserving these great cars correctly for the delight of their fortunate owners, automotive history also is preserved.

But concours are not without their critics. Some – although this is becoming less the case now – have as their prime criterion spotless condition regardless of anything else. This may encourage collectors to wipe away much of the visual provenance of their cars by indulging in an over-glossy restoration which does not follow the car’s original ethos.

It may also result in owners keeping their cars as polished ornaments, secreted away in dehumified silence until the next concours. What can be more wasteful than owning a wonderful car and never driving it as it was born to be driven?

A third criticism is that, over the past decades, many of these cars have become worth massive sums of money, and are now accessible only to people who are very rich. Very rich often means at least middle-aged, because the owners have spent long years working to accumulate their wealth. So the most glamorous concours tend increasingly to be patronised, apart from the odd smattering of rock stars and showbiz, by older people. And we all know that our hobby of loving, restoring and using old cars will only survive if younger people come into it.

Which is why Hagerty has done something rather wonderful in creating the Festival of the Unexceptional, otherwise known as the Concours de l’Ordinaire. It’s not only tremendous fun, with a definite element of tongue-in-cheek: one hoarding described the event as The Bland that Time Forgot. It’s also genuinely important, because it celebrates cars that can be afforded by young enthusiasts who are on a tight budget.

Indeed, it makes its own contribution to preserving automotive history. While the top-end cars are carefully preserved, and more so as their values have climbed up and up, the everyday boxes of the 1970s and 1980s have gradually disappeared, victims of rust, a failed MoT, a mechanical failure or an accident which to mend would cost more than the car is worth. Off to the junkyard.

Thus the everyday cars that thronged our roads 30 and 40 years ago, churned out in their hundreds of thousands by factories from Longbridge to Gwangmyeong, have in some cases become rarer than Ferrari GTOs. But occasionally a survivor pops up: maybe a car that has been driven only to the village shop by a little old lady and kept well-polished by her gardener until she can no longer drive it. So it is sold for a few hundred quid – and that’s the good news, because it is within the reach of a youngster, a student or an apprentice who can cherish it, find the bits to restore it, and enjoy it on the road. Old men can have their Bugattis; youngsters find a Morris Ital and devote time and energy and care and skill to turning it into an immaculate car for fun and adventures.

This year’s entrants for FOTU came from far and wide, like the young lad from Poland with his immaculate and beautifully restored Hyundai Pony. He and his girlfriend had driven 1100 miles to Grimsthorpe Castle. The Pony didn’t miss a beat. They were setting off again as soon as the concours was over, because she had to be at work in Warsaw on Monday morning. Over 2000 miles in five days – more than some concours queens do in a decade.

The popularity of the event was underlined not only by the queues driving in and the crowds who swarmed the concours field, but also by the car parks. There were a lot of ‘unexceptionals’ there too, some of them truly rare. I was delighted to find a Talbot Samba convertible (13,000 built, six left on the road), an immaculate Fiat 125S with its Lampredi-designed twin-cam engine (hundreds of thousands built, three left in the UK), a Subaru Vivio T-top, a Citroёn Acadiane van and, unbelievably, a huge Toyota Century, as built for Japanese politicians, with curtained windows and a four-cam V12 engine. I had only ever seen one once before, in Tokyo, 25 years ago.

The atmosphere was great. Proud owners discussed the respective merits of L and GL variants, complete strangers found themselves passionately discussing velour upholstery, and picnics replaced the pate de foie gras and champagne flutes of Pebble Beach with cheese and pickle sandwiches, cans of lager and a lot more laughter.

This Hagerty event is getting ever more popular year by year, and it’s achieving two great goals. It is bringing younger people into an area of the classic car hobby which does not require an entry ticket of great wealth; and it is preserving cars which are part of our motoring heritage and must not be allowed to rust away. And we all love basking in the nostalgia that these cars bring. Look, there’s the car my mum took me to school in, the car my dad crashed, the car I failed my driving test in, the car that broke down when we were all going on holiday.

In fact, I think I need something Unexceptional myself. What about a Vauxhall Belmont? Or maybe a nice Skoda Estelle…

And the winner is… Vauxhall Astra Merit wins 2022 Hagerty Festival of the Unexceptional
Opinion: The health of the car hobby
A roman helmet, Picasso plate, and just what is originality, anyway 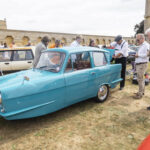 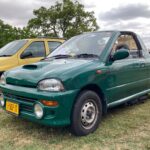