The tapping of accountants’ calculators has subsided, and the number they’ve landed on for the First Edition variants of the new Lotus Emira is £75,995.

As you should infer from the name the First Edition will introduce the Emira range and features the car’s most potent, V6 engine, a series of option packs as standard and unique badging, with production scheduled for the spring and deliveries shortly thereafter.

Launched back in July, the Emira is the second new-generation Lotus to emerge from Hethel, following the unveiling of the Evija electric hypercar. For the time being at least it effectively replaces the Elise, Exige and Evora all at once, though conceptually it’s closest to the latter, notably straddling the gap between Porsche’s Cayman and Evora depending on engine choice.

Those choices include an AMG-sourced 2-litre four-cylinder turbo, and a Toyota-sourced 3.5-litre supercharged V6 much like that found in the outgoing Exige and Evora. The four will come exclusively with AMG’s dual-clutch transmission, while the six gets either a six-speed manual or six-speed automatic.

A Drivers Pack comes with a choice of the two suspension setups, Tour or Sport, along with Goodyear Eagle F1 Supersport rubber, or Sport suspension with Michelin Cup 2s. Next is the Design Pack, with darkened glass, sports pedals and an Alcantara headliner, while the Convenience Pack comes with front parking sensors, a reversing camera, rain-sensing wipers and other goodies. All will be available on series production Emiras of course, but here they’re all standard.

Six exterior shades (Seneca Blue, Magma Red, Hethel Yellow, Dark Verdant, Shadow Grey and Nimbus Grey) and seven interior options (red, black, grey and tan Nappa leather, plus black Alcantara with either red, yellow or grey stitching) will be available, and Lotus is already letting you dabble with an online configurator to mix and match all these options.

If the £75,995 First Edition sounds a bit spicy though, Lotus has confirmed that an entry-level Emira (with the four-pot) will come in at a fiver under sixty grand – but you’ll have to wait for 2023 for that one.

Next to the obvious German alternatives? Well, it puts the Emira entry point mid-way between a four-cylinder Porsche 718 Cayman S and the six-pot Cayman GTS, though you’ll have to stomach the Emira 4cyl’s DCT-only transmission choice whereas Porsche offers a manual gearbox. On the plus side, the Emira’s steering is hydraulically assisted, so there should still be little to touch it for interactivity at your fingertips. 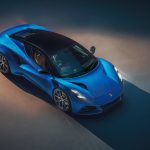