Line up behind me, son, and watch how it’s done! Learning the course at Shelsley Walsh

My 19-year-old son has an enviable car history: he has driven just five cars in his life, and they are an interesting bunch. Aged 14, Freddie started off in an Audi R8 on a junior supercar experience at Longcross, a former MoD test track, in Chobham, Surrey. At 17, he started driving in his mum’s Toyota Aygo and passed his test in his driving instructor’s Ford Focus. Last summer, he drove a BMW M2 on the skid pan at Goodwood. More recently, after adding him to my Hagerty insurance policy – something I’d recommend to any parent who feels the time is right – he took the wheel of my 1946 MG TC.

Freddie and I have always loved the idea of motorsport, but for various reasons neither of us have had the time to commit to it before. Like most motoring enthusiasts, I’ve completed my fair share of track days and even took part in a sprint a few years ago, but that’s the limit of my ‘race’ activity. Then, at last summer’s baking hot Shelsley Walsh Classic Nostalgia festival, I discovered that the Midlands Automobile Club (MAC), runs hillclimb courses there throughout the year. A plan started to form; what better birthday present for my son, I thought. And what better excuse for me to spend a day there with him. Then we could use the MG to compete in hillclimb events the following season.

I fell in love with Shelsley Walsh the first time I visited. Nestled so far into the Malvern hills that it tempts you to believe your satnav is wrong, the 1000-yard track and small collection of buildings that surround the paddock are a step back in time. The tiny, wooded valley up which the hillclimb course snakes looks out over a vista almost unchanged since it was first opened in 1905. The track is a long way from our home on the south coast and I wasn’t brave enough to make the journey in the MG, so my daily driver was called into action when we set off from our house at 4.30am.

We arrived just in time for breakfast rolls and coffee, keen to see who else was there. Hillclimbing is renowned for being a very egalitarian form of motorsport and the cars arriving in the paddock proved it: a healthy proportion of modern 911s and a couple of Ferraris were parked next to a wide-arch Mk II Escort, a stunning Realm C-Type and a Rover 200 BRM complete with trademark orange grille.

Once we’d all parked up, all thirty students converged in the glorious old courtyard for a cup of tea in the morning sun and an introduction by chief instructor Gary. Having been briefed on the course, the lines to take and some safety rules, we were split into smaller groups and set off to explore the track on foot.

My group was led by Simon who hobbled up to the start, his leg in plaster from a recent accident. Simon has been working at Shelsley for longer than he cares to remember, and at each corner he imparted the benefit of his experience: use this line, turn here, brake there. At the bottom of the hill the course looks relatively straight, but it is deceptive: the road kinks left through the Kennel Bend, then climbs steadily before hitting the ‘S’ bends where the gradient suddenly increases dramatically. Under the dappled light of the trees, Simon explained that this was where the best runs were made: drive the ‘esses’ well and you have a quick run to the finish. Do it badly, and you’re trying to make up time. The course walk complete, we headed back to the start for our first run of the day.

I lined up to take my turn, watching the car ahead snake off of the line in a cloud of tyre smoke. As the marshals called me to the line, then let me roll back onto the starting chocks, I’ll admit I was nervous. Although Shelsley is just 1000 yards long, its narrow, high-banked track has no margin for error. If you get it wrong in a modern car it could be expensive; if you’re in an ash-framed vintage car like our MG, it could be a whole lot worse. By the time the starting light had turned green, I had decided to take it easy.

That thought evaporated as the adrenaline kicked in. I floored the accelerator too quickly, losing traction in the front wheels and juddered away. By the Kennel Bend, I’d picked up speed but kept a wide line, aware of the concrete wall that flashed by the passenger window. Up past the crossing, under the Members’ Tent on the right, keeping tight on the left of the track before drifting right, ready to brake before cutting across the bottom ‘S’. Keeping the power on, I cut right, trying to clip the drain cover that Simon had told us was a good marker, before powering to the finish, crossing the line travelling at around 66mph. It felt a whole lot faster.

To be honest, I was pretty pleased, and thought I’d done really well. That feeling was short lived. On the way back down, the drivers were stopped at each bend to receive a ‘hot’ debrief from the instructors. I’d been too wide at Kennel and at the Crossing, lost a lot of power in the bottom S and missed the apex on the top S. Trying to remember everything I had been taught, I pulled into the paddock and handed the car over to Fred who pulled on his helmet and eagerly pulled up to the start. Moments later, I watched with a huge sense of pride as my son pulled away and disappeared around the first bend. A few minutes later he reappeared, a grin on his face.

Slowly, as we clocked up more runs, we gained in confidence and our times improved. The instructors were superb, stepping back slightly on each run to allow us more freedom: first debriefing us back in the paddock, then letting us run on our own and telling them where we felt we could improve. I lost count of the total runs we completed, but it was in double figures, and by the end of the day we all felt that we’d dramatically improved in both confidence and ability.

For me, hillclimbing is the perfect motorsport. If you’re running a road-legal car, you need minimal equipment, it’s quick, relatively cheap and from what we discovered at Shelsley, everyone is really welcoming. More importantly, it’s as much of a personal test as it is a race against others.

Now, with a few dates in the diary for events throughout the summer, both Fred and I are looking forward to finally testing ourselves and the MG on the hill. The first event is the Hagerty Hillclimb on Saturday 28th May, back at Shelsley Walsh. We can’t wait.

How to speed up Shelsley Walsh – by the fastest man on the hill
Up, up and away! 8 star cars tackling the first Hagerty Hillclimb
Drew Pritchard and Paul Cowland to go head to head at the Hagerty Hillclimb 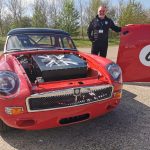 Electric classics to get their own race series by 2024 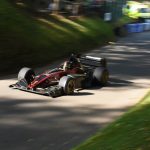