Women driving change: “We need to break away from the perceived stuffy Old Man stereotype.”

As part of International Women’s Day, Hagerty is giving a platform to women driving change. Catch the other stories in this series and read about the 13-year old karting sensation and some of the most significant women to have influenced the automotive scene.

It can feel a bit tired to ask the question of how to get more women involved in the classic car hobby – a scene that at times can appear to be no more inviting than a gentlemen’s blub. After all, nobody is stopping women from getting involved, right?

However it is worth asking what can be done to encourage them – and any others who might be put off by the sometimes stuffy image associated with old cars. Because, while there is nothing to stop a woman from enjoying classic car ownership, grass roots motorsport, car events or any other aspect of automotive-based camaraderie, it remains a scene that can – unintentionally or otherwise – feel like too much of a boy’s club to be welcoming.

Let’s get something straight: We’re not talking about positive discrimination here, and we’re certainly not denying the already prevalent and influential role of many women in classic cars, be that through events, clubs or motorsport. Quite the opposite; we’re here to celebrate those women, and to ask them how they would make the classic car world – that we all know to be a convivial place – more welcoming to those who might find the first leap into it an intimidating one.

“Cars, driving, engineering and racing are for everyone”

Rachel St Vincent Pickard owns a 1964 Alfa Giulia Sprint and runs the Classic Engine Workshop together with her husband, Roger. She says she’s unconvinced “that women need to be more involved in classic cars for the sake of having more women in the scene,” but stresses that it is vitally important to have younger people of all genders involved. “We need to break away from the perceived stuffy Old Man stereotype. We’re working with the Association of Heritage Engineers, which is exploring ways to help young people become involved in classic cars.

“As for encouraging women into the scene, I think we need to start early.” As St Vincent Pickard puts it, that messaging should begin before school age. “Girls often see cars as something for boys and not for them. We need to be engaging them in the idea that cars, driving, engineering and racing are for everyone.

“Mercedes did a lovely pre-school project a few years ago based on Ewy Rosqvist’s 1962 win at the Argentinian Touring Car Grand Prix; that sort of thing should be in the National Curriculum.”

The Mercedes campaign, titled ‘No Limits’, was widely acclaimed as one of few automotive campaigns that have specifically targeted school-age girls, and challenged the gender-stereotype that’s rooted in most children from a young age.

Jane Weitzmann echoes many of the same sentiments as St Vincent Pickard, while praising the “wonderful” classic scene. And Weitzmann would know that scene better than most; her company, JHW Classics, specialises in supplying some seriously interesting cars – Mirua, 2000 GT, XJ13R and many more besides – for some equally interesting projects, including film and television production.

“There’s always somewhere to go – a meet or show – where your baby will be well received,” says Weitzmann. “You’ll always find someone to chat to, and they’re almost always friendly, well-informed folk who are grateful to see a rare car and learn more. But, it is a male dominated industry, and I think it’s an ongoing exercise to teach men that sometimes women actually know more than them and can be experts in the field.”

Would a ladies-only car club be a good move, in Weitzmann’s eyes? It doesn’t chime with her views. “I have never believed in any gender specific clubs, but hopefully articles such as this help women realise that this is a hobby or business that they can easily become involved with. Seeing more women involved will encourage younger women to get on board. Promote the camaraderie of the scene, and the fun and thrill of driving a car.”

The idea of a women’s car club isn’t a new one. The Ladies Automobile Club was founded in 1903, and The Autocar reported on it in 1904, stating that ‘Ladies have long felt that they could not leave such a fascinating pastime as automobilism to be enjoyed by the sterner sex alone.’

The Ladies Automobile Club was eventually merged into the Royal Automobile Club, but there are, of course, various active communities of car-enthused ladies in action today. Ranging from modern online communities such as Car Girl Culture, which invites any woman who loves cars but has a particular focus on modified and performance cars, to the British Women Racing Drivers Club, which was established in 1962 and remains a well-respected and active organisation that encourages and supports women in motorsport.

But gender-specific clubs and events can feel as if they segregate rather than integrate. The female-only W Series race series proved divisive for that very reason, with a number of established women racers being outspoken against it. Professional racing driver Pippa Mann saw it as a form of segregation, saying, “We did not grow up dreaming of being segregated, and winning the girl’s-only cup.”

For all that, there are many supporters of the W Series which, in only its second year of running, will support eight Formula One races throughout 2021 and promises to provide a powerful platform for those women involved. A top-flight race series is one thing, though – the women we spoke to were all unconvinced that a gender-specific club was the right approach.

“We need to support and encourage each other more”

Tania Brown is club secretary of the Vintage Sports-Car Club, and owner of a 1930 Austin 7 Ulster and MGP, amongst others. “I think our community can only be strengthened by welcoming more people, regardless of sex, colour or creed. The VSCC is trying to get more women at sub-committee and committee level to ensure that views from women are heard and represented.

“I think there are two areas; firstly we need to support and encourage each other more, whether we like a different era of car or have slightly different ideas. Secondly, I think we need to make women more visible, by celebrating our achievements, by making sure we are represented at grass roots, national and international level and just by being a bit happier to big ourselves up!”

Brown also makes the point that there are many critical roles within automotive clubs that anybody can get involved in, without having to own or drive a classic car. “Marshalling has a lot to offer, transferable skills that can come in useful for women who may have been out the job market due to family commitments.

“I know a lot of women in orange on the bank but most of the most inspirational women I know have been in the specialist areas, especially assembly areas at race meetings and the paddock at hillclimbs. There are lots of behind-the-scenes roles available, fulfilled by both men and women. In fact, there is something to suit nearly everyone.”

Enjoyment of classics doesn’t only come through motorsports and club involvement, of course – it starts with a love of cars. Becca McIlroy is that increasingly rare thing, a young driver who’d rather clock up the miles at the wheel of a classic than a modern machine. The 20-year old owns a 1965 Morris Minor (named Lionel, naturally), which is her daily driver.

“I was brought up in the classic car world, as my dad has always had a classic. I’ve only really driven classics since I passed my test in 2017 and have done thousands of miles since. People often ask me if I get scared to go on a long road trip by myself in case something happens, but I don’t mind. The odd breakdown is something that could happen to anyone but it’s important not to let that put you off. I’m a committee member of the young owner’s branch of the Morris minor club and there are lots of women in it. I don’t think a women’s only classic car club would be necessary but the young members groups definitely show everyone that you don’t need to be an older man to drive a classic car.”

There is a theme, then, amongst those we spoke to about how to get more women involved in classic cars: start with younger people. Teaching of the achievements of Ewy Rosqvist, Michelle Mouton, Pat Moss and others – alongside exceptional women from other engineering industries such as aviation and space travel – would serve as inspiration to school girls and boys alike.

Seeing more in the media of those women involved in the automotive scene would also be a powerful motivator, and an easy way to show that the hobby and industry isn’t the exclusive realm of men. Certainly, few would argue that encouraging involvement, regardless of gender or age, is vital for the industry to thrive and evolve.

Ours is a special hobby. One we all enjoy celebrating and sharing. Let’s ensure that that special experience is safeguarded for the next generation. 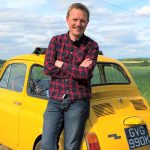 Beware: Owning cars, and stuff, from the year you were born is catching
A story about
Classic cars