Gooding’s Passion of a Lifetime auction dazzles at Hampton Court

In early September in a normal year, those on the classic car circuit have attended dozens of car shows and their loafers or heels are beginning to protest at the workout. This year though is anything but normal and last weekend’s Concours of Elegance at Hampton Court Palace was the first major car event many – myself included – attended in 2020. As a result, on arriving at the imposing West Gate of Henry VIII’s favourite pad, I felt a sense of anticipation and a tingle of excitement that I haven’t felt in many years.

I was not disappointed. Through the entrance was the Palace’s large Base Court, filled with Gooding&Co’s Passion of a Lifetime consignments marking the auction house’s entry into the European market. I’ve been attending auctions for years and have never seen such an impressive group of vehicles in a single sale: fifteen cars, mostly from one collection, half of which would qualify as ‘star car’ status in any other major international auction. Little wonder records would be broken during the sale.

Three exceptional Bugattis dominated the courtyard: a 1928 Type 35 C Grand Prix, a 1934 Type 59 Sports and a 1937 Type 57S Atalante. Just describing each in a few sentences doesn’t do them justice; over fifty pages of the catalogue are devoted to telling the stories of these wonderful vehicles: the racing glories, royal ownership and tales of survival that led them to this point in relatively unrestored condition.

It’s this last element that stood out for me: the Type 59 and Type 35 in particular have an exquisite age to them that is so easily lost during restoration: peeling paint showing previous colours, leather and wood interiors worn smooth by decades of their owners using them as they were intended. For me, the Type 35C appealed most, despite being the least valuable of the trio. With only four owners since 1932, this ex-factory works entrant to the 1928 Targa Florio was then campaigned in hillclimbs, circuit races and major Grand Prix events including around the famous banked Monza track in 1932. It’s unashamedly a racing car: the plain metal dash lacks anything that isn’t essential; it doesn’t even have the engine turning seen on other examples. The red, cracked paint has not been touched since Italian Ricardo Bernasconi had it repainted by the works in his national colours when he purchased it from them in 1929. It’s exquisite, both as a motor vehicle and as a piece of art.

Next to the Type 59 was another automotive icon of a very different era: a 1971 Lamborghini Miura P400 SV Speciale, glittering in its gold coachwork. Adapted at the factory to the requirements of the first owner, the car shared two elements of Bob Wallace’s Miura Jota: dry-sump lubrication and a ZF limited-slip differential. Marked on the build sheet as ‘Lavori Speciali’ there was an additional note: ‘Attention! Fit special engine Ing. Stanzani (ask Bob)’.

Three very special but very different Aston Martins were also consigned. A DB4 GT Zagato once owned by AML Chairman Victor Gauntlett sat poised next to the 1935 ‘White Mouse’ Aston Martin Ulster, originally raced by Prince Bira and consequently campaigned successfully by William Headlam. Pick of the bunch for me though was ex-Tony Gaze 1955 Aston Martin DB3S/102 that he and David McKay drove for the Australian Kangaroo Stable and still competes regularly. Any DB3S is beautiful, but this car’s dark green coachwork and matching wire wheels really showed off the flowing curve of its flanks; a wonderful car.

The rest of the collection were equally impressive, from the Wensum-bodied 1924 Vauxhall 30-98 to the most affordable lot on the card: a 1959 Lancia Flaminia 2500 Sport with its beautiful Zagato coachwork including distinctive ‘double bubble roof’.

On Saturday evening, auctioneer Charlie Ross successfully sold all but one of the 15 cars offered, setting a record for the highest average sale price – £2.42m – for any public classic car auction, and various other world records including for Bugatti (£9.535m for the Type 59), for a Type 35C Grand Prix (£3.935m) and for a Vauxhall (£1.1m for the 30-98). Just the Aston Martin DB4 GT Zagato failed to find a new buyer, bidding up to £6.3m which was slightly shy of its £7m low estimate and not enough to secure a sale. Its earliest history, now owned by a famous racing driver or celebrity, but bought first by a haulier’s son, may have contributed. Hagerty will publish a more detailed analysis of the evening, but suffice to say that Gooding&Co intended to announce their arrival in the UK, and they certainly did so in £34m style.

Away from the rarefied world of the Gooding cars, there were other automotive delights. Take the Ferrari 250 LM that placed second at Le Mans in 1965. Or, next to it, a Ferrari 250 GTO 3387GT, the original factory mule with competition history that included Sebring, Le Mans and Daytona, recently restored to superb condition by Joe Macari. For me though, the real treat was the Porsche 917/023, the first car from the marque to triumph at Le Mans, in 1970. Static it is an imposing sight in its red and white Austrian livery, but when it later thundered to life, it made every head turn.

The Concours of Elegance has, in my opinion, the best location for any such event. Hampton Court’s formal gardens consist of gravel drives radiating out from the entrance interspersed with dark, umbrella yew trees. The result is like finding a secret garden full of hidden treasures; you walk through the trees never knowing what you might discover. Lots was there to be found: Daniel Donovan’s very special recently restored 1957 Jaguar XK150 S with stunning black coupe coachwork by Bertone was a particular favourite, as was Aston Martin’s most recent Q Division creation: the 836bhp one-off Victor, as imposing a supercar as you’ll find. Racers were there in force, too: from the ex-Surtees Ferrari 365P and Boutsen/Wollek/Stuck Porsche GT1 Evolution through to the 1955 Jaguar HWM ‘HWM 1’ and the 2005 McLaren MP4-20A.

There were some real crowd-pleasers too, not least of which was the 1921 Leyat Hélica, a propeller-driven eccentricity that attracted a huge amount of interest when it spun to life. I spoke to someone who had recently driven it: apparently it’s as difficult to control as you’d expect, and the brakes are somewhat less effective than you’d like. It’s now one of just two examples, making it one of the rarest cars at the show, and indeed anywhere.

The many familiar faces seemed to be buzzing with excitement, happy to experience the event but also genuinely pleased to see each other. The feeling was one of relief, that such a concours had actually taken place during such challenging times, and that the owners of the cars had put their concerns aside to enable their vehicles to be shown.

Although fewer cars were here than in recent years, the quality more than made up for the numbers. Some suggested that the Concours had benefitted from the cancellation of Pebble Beach, and everyone talked about the desire that enthusiasts are feeling for attending shows: David Bagley, of Salon Privé, which is held over the final weekend of September, told me that its tickets had sold out within a few minutes of being released.

After experiencing the buzz of the Concours of Elegance Hampton Court, it’s easy to see why our community is eager to attend such uplifting events. 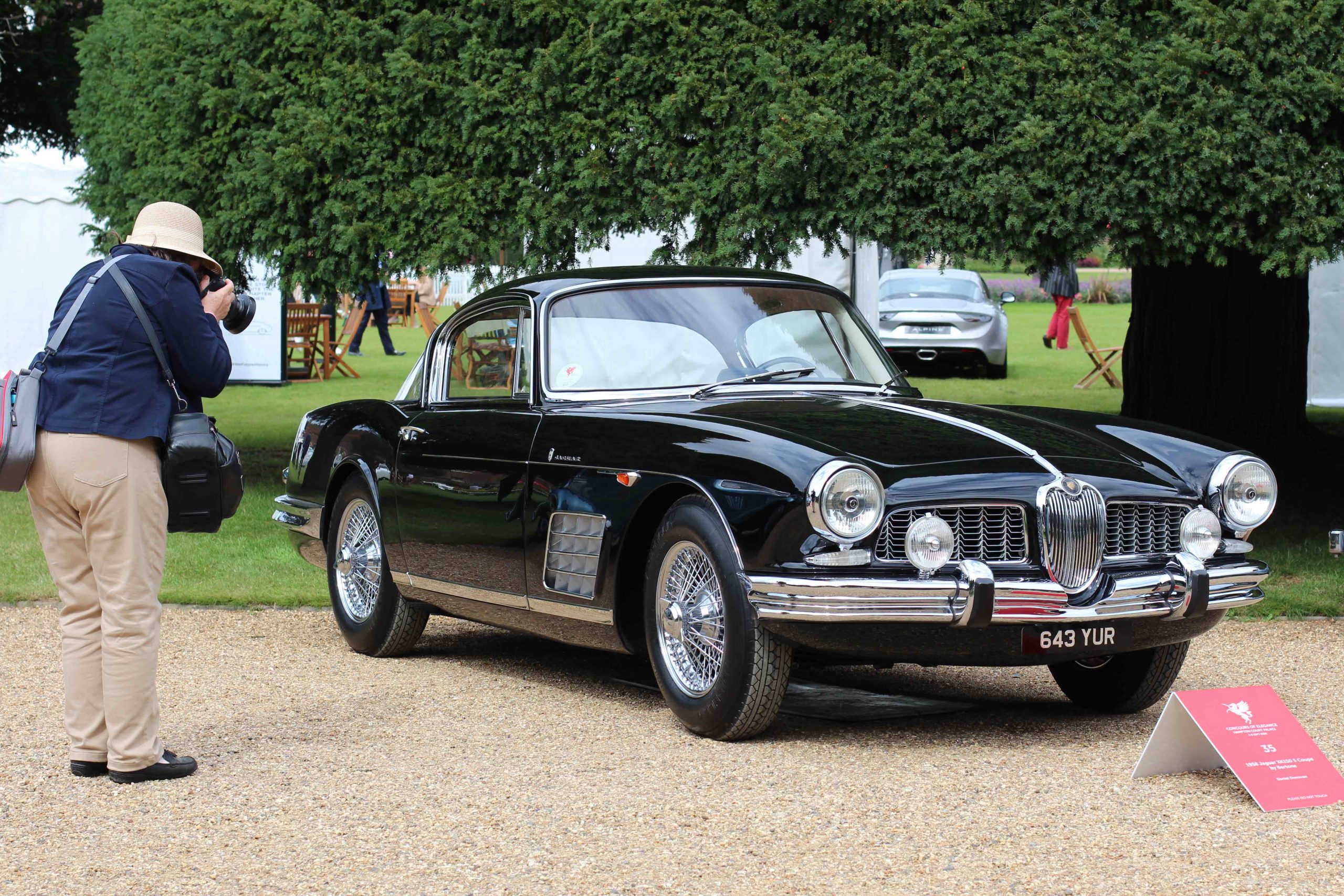 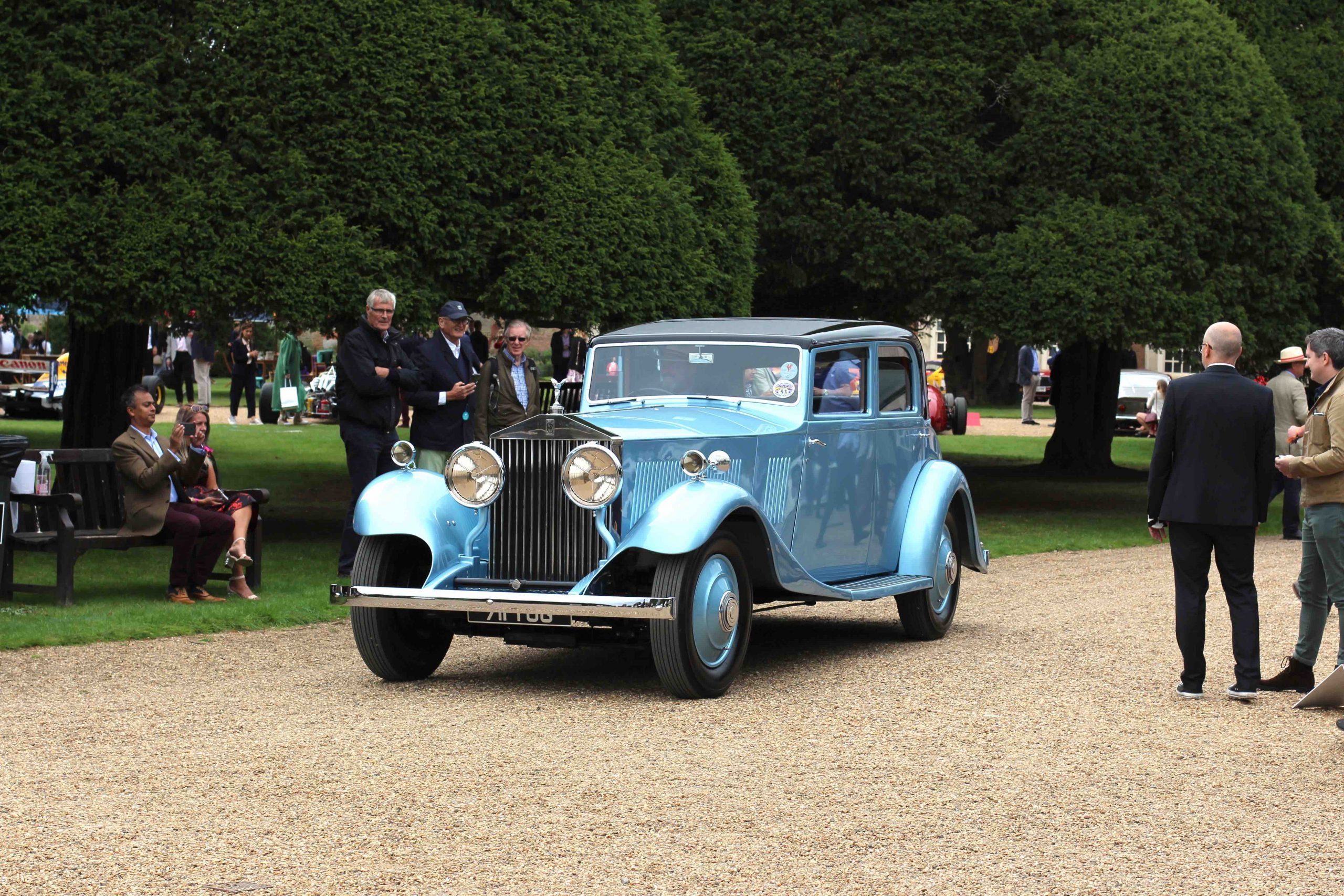 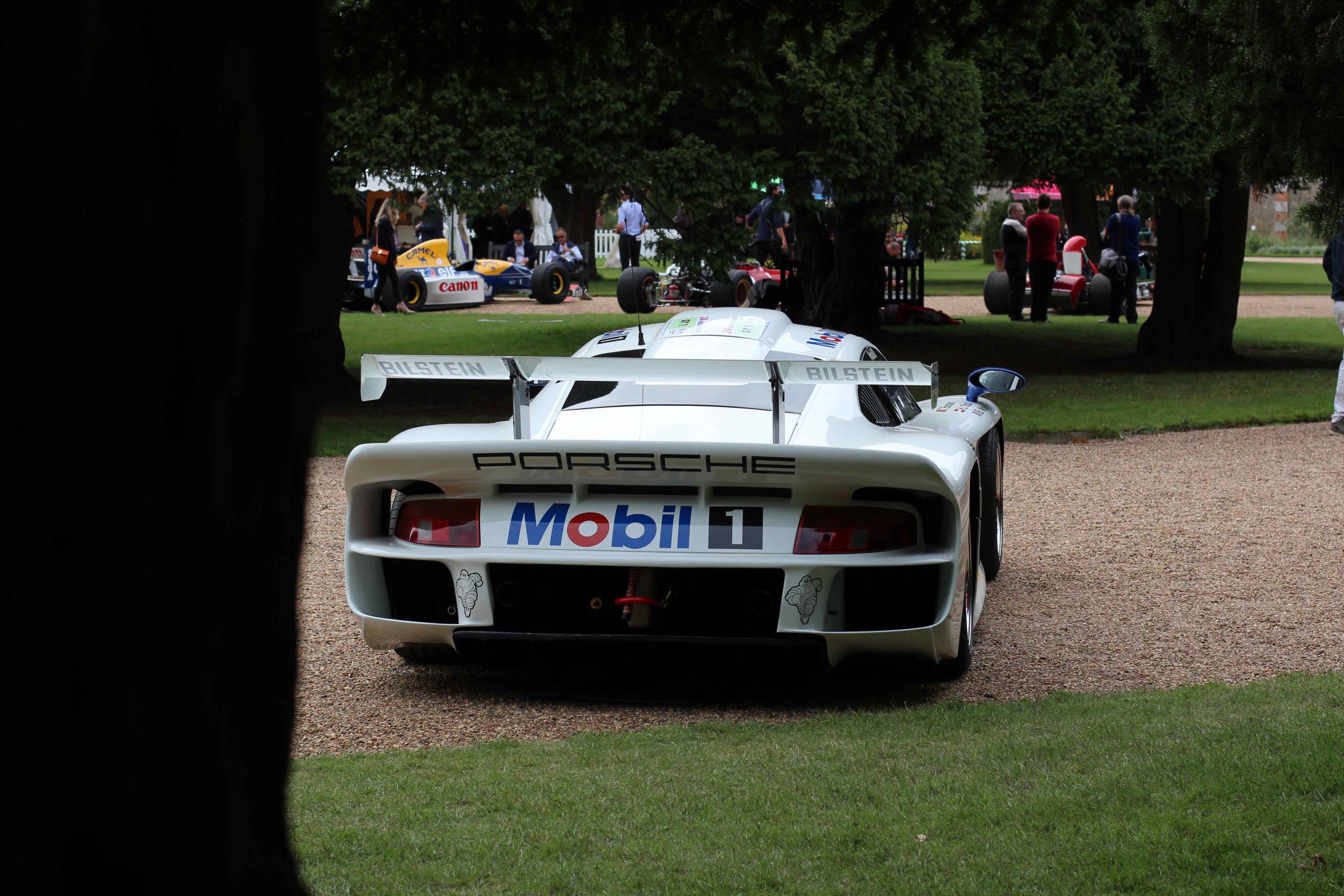 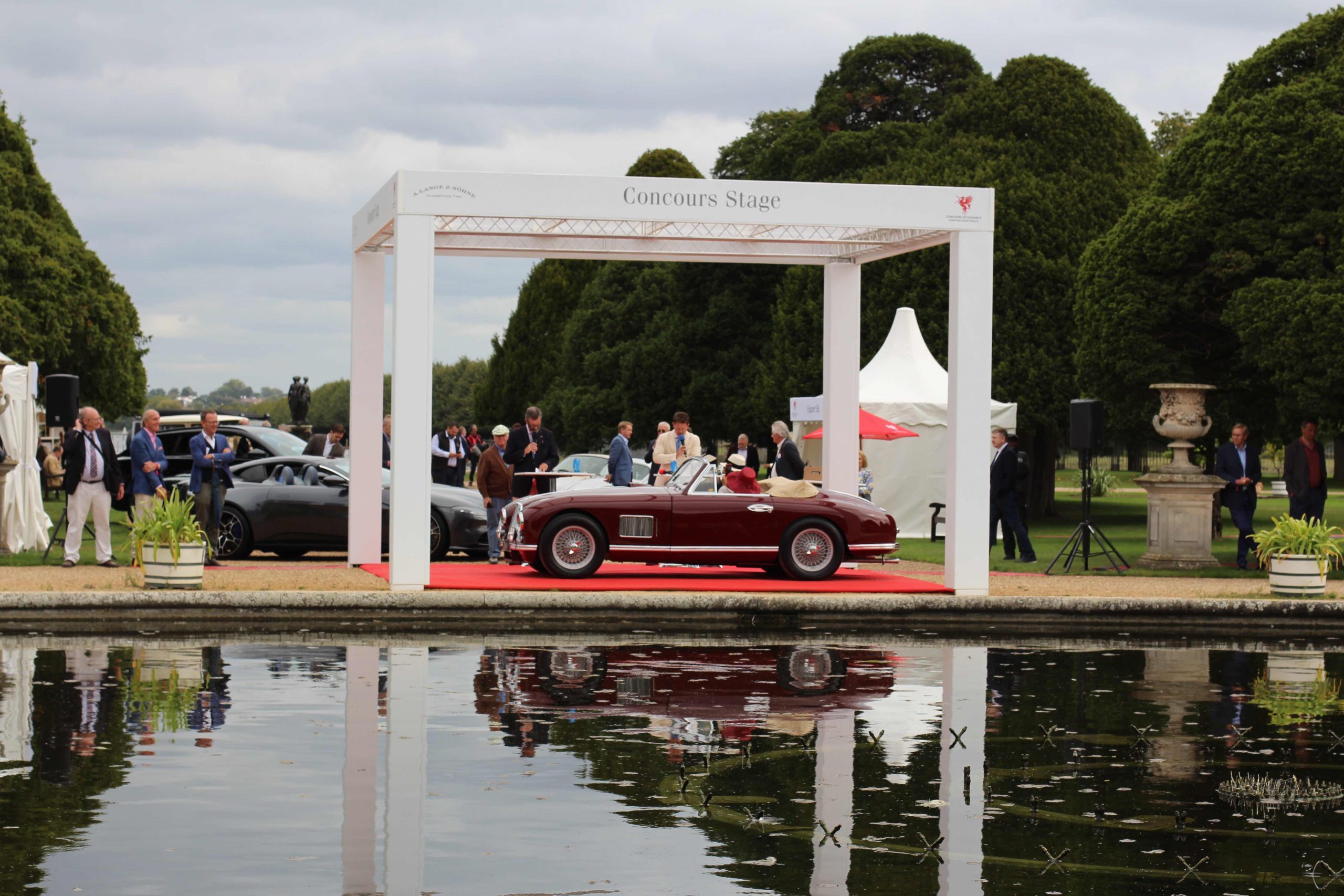 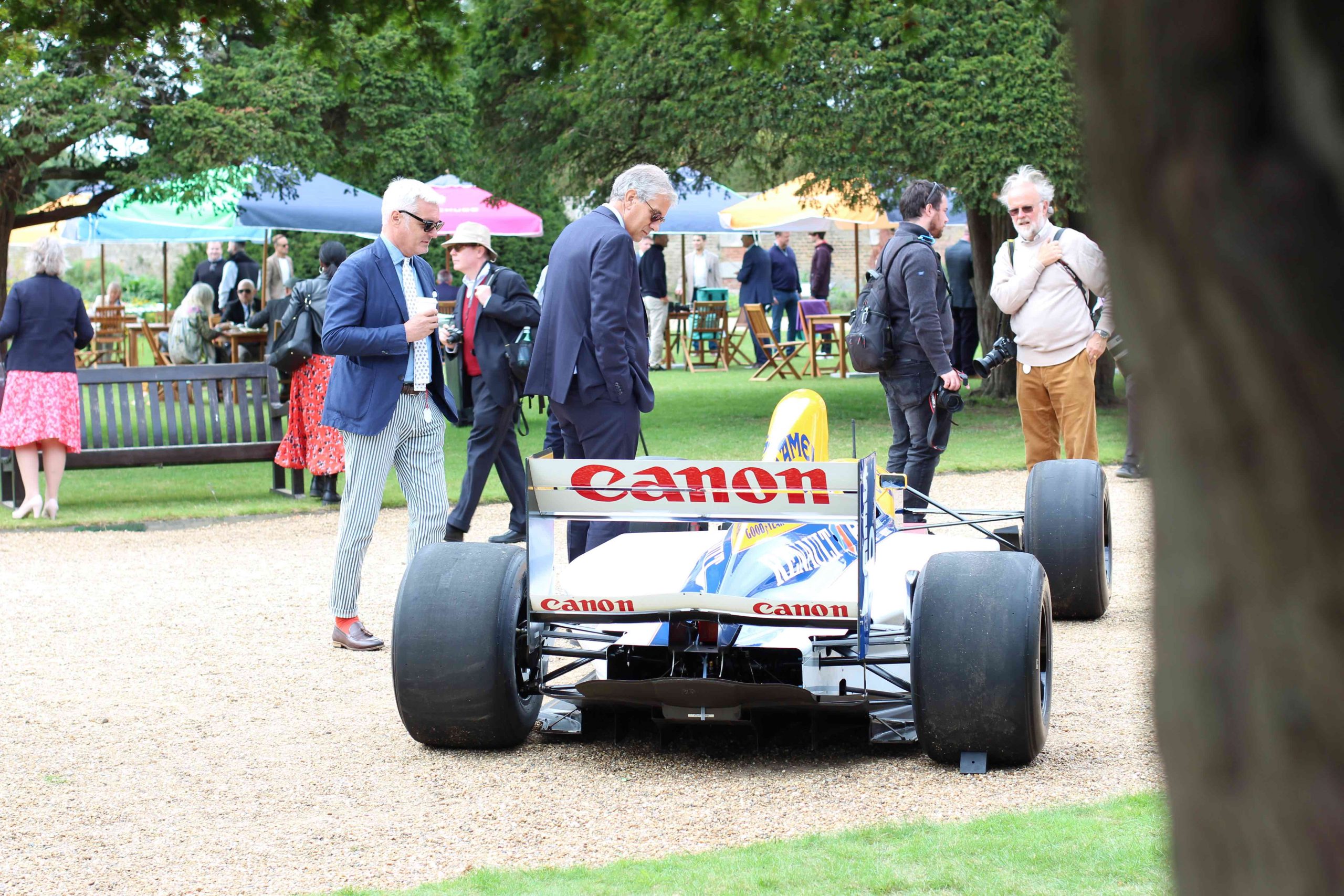 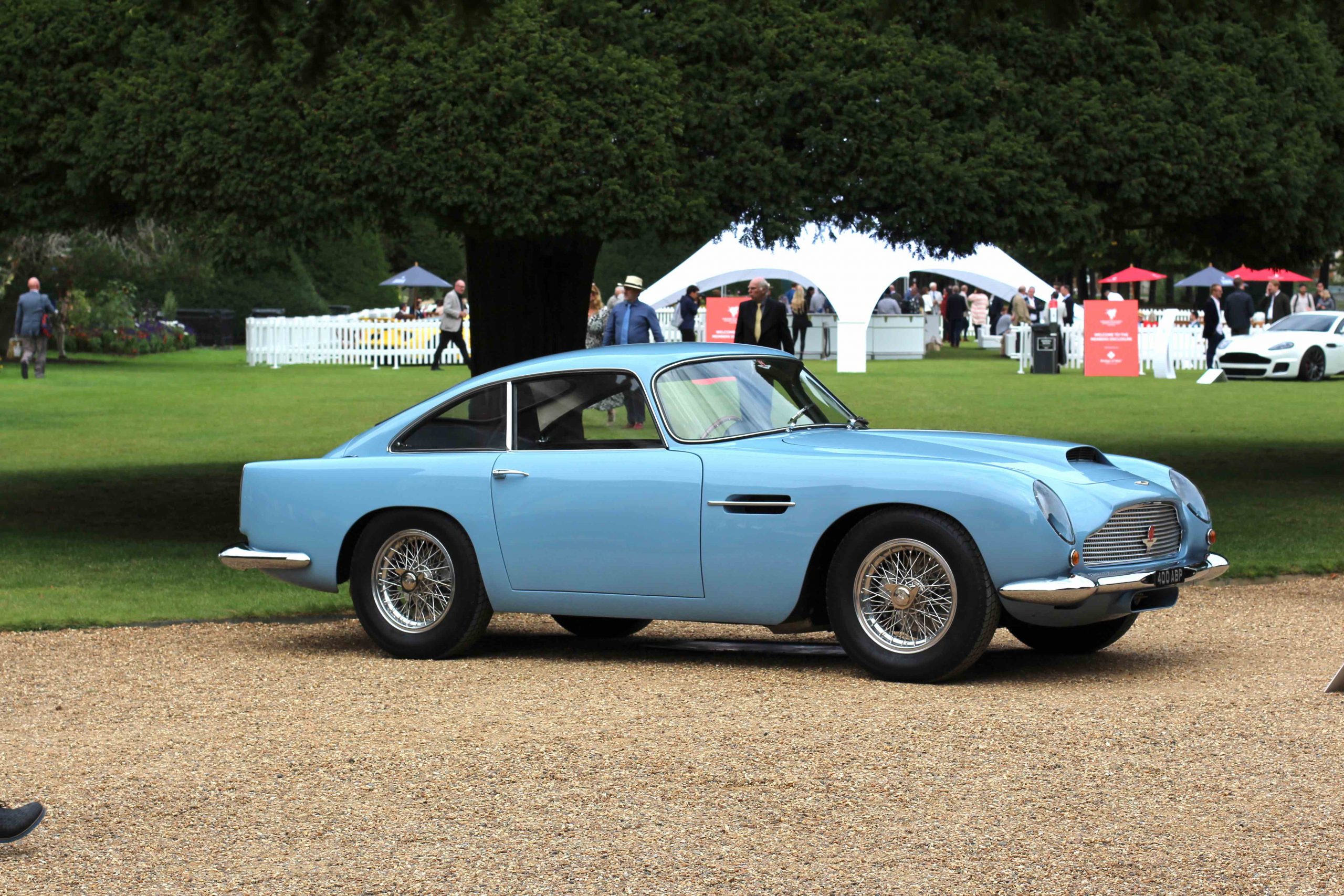 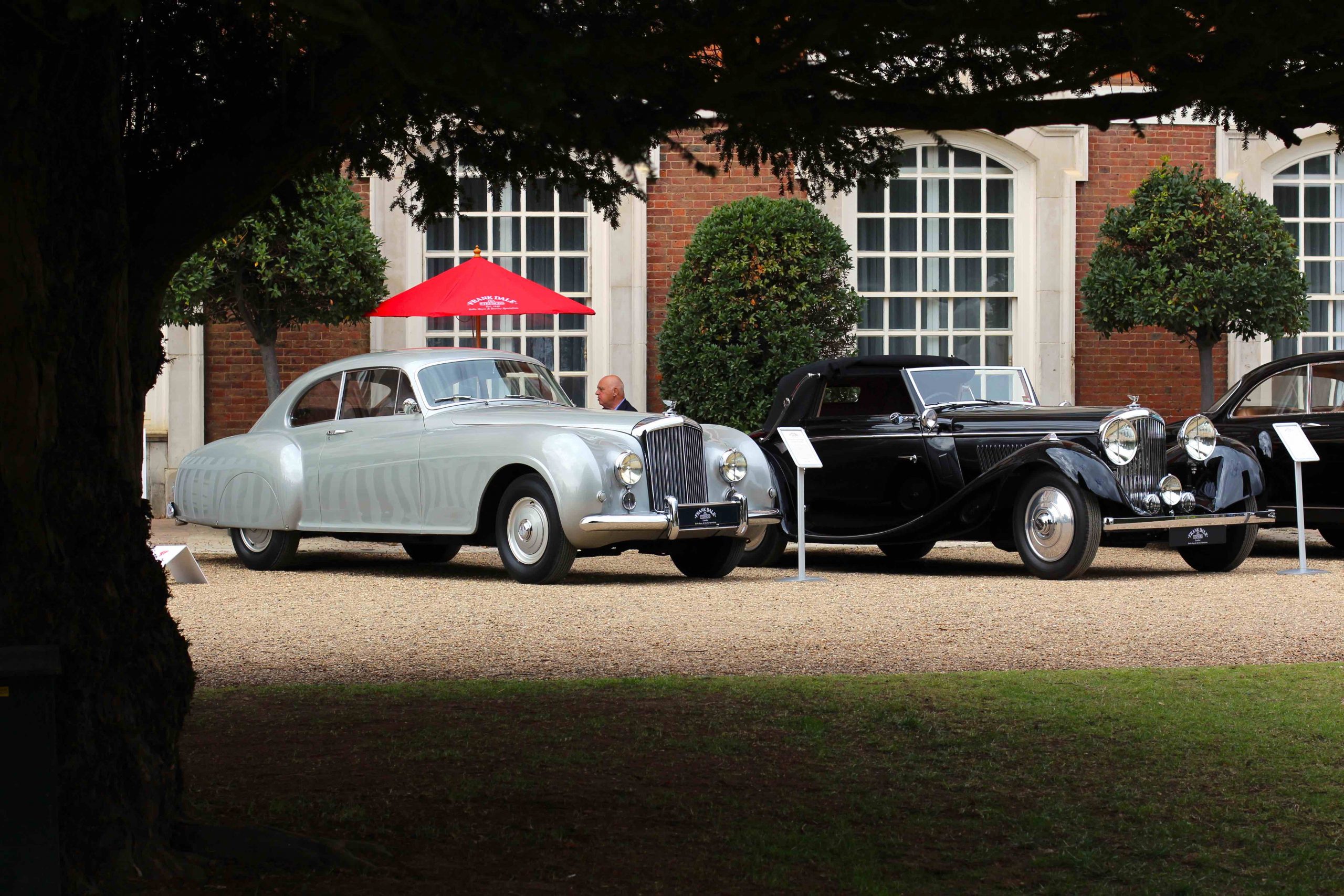 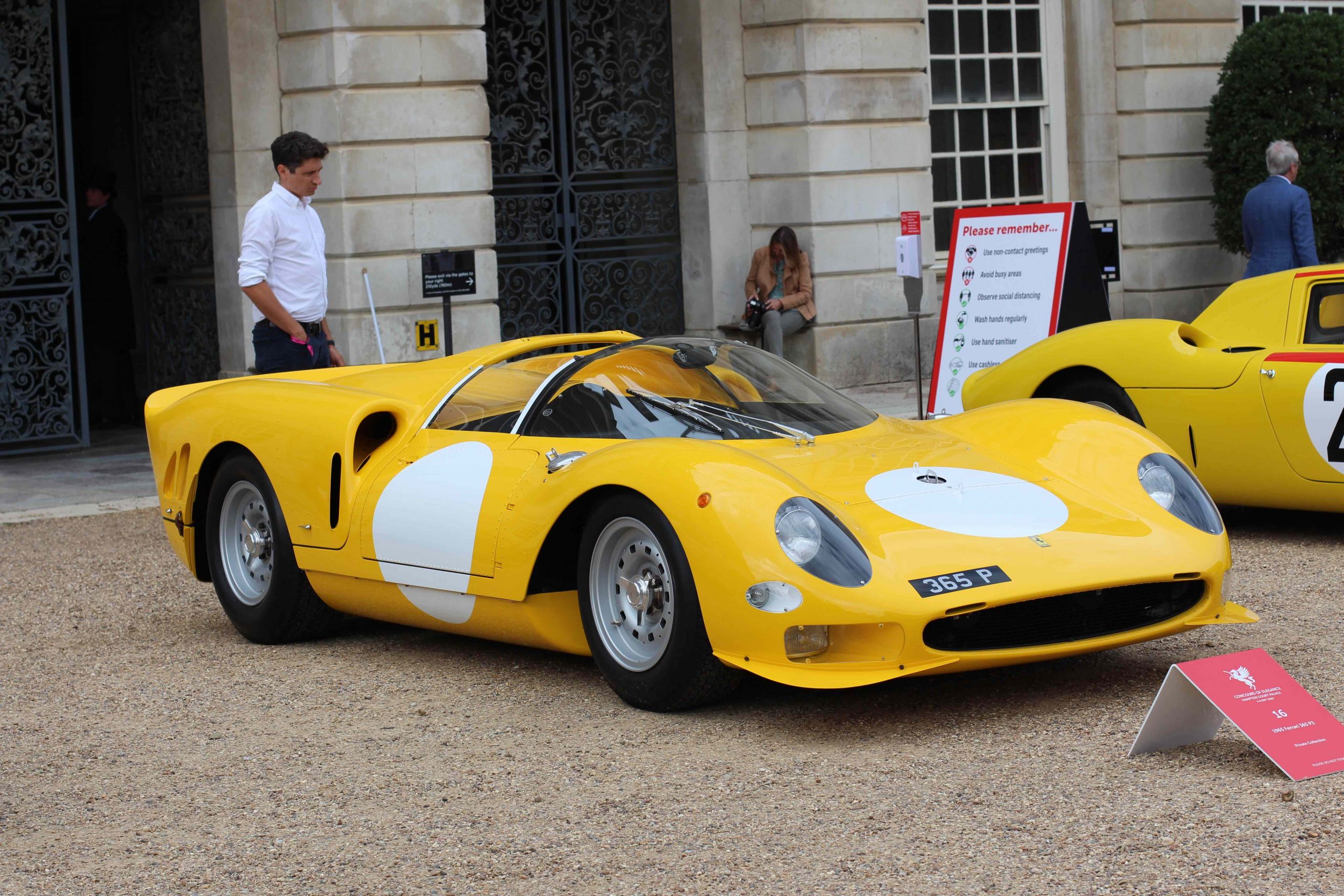 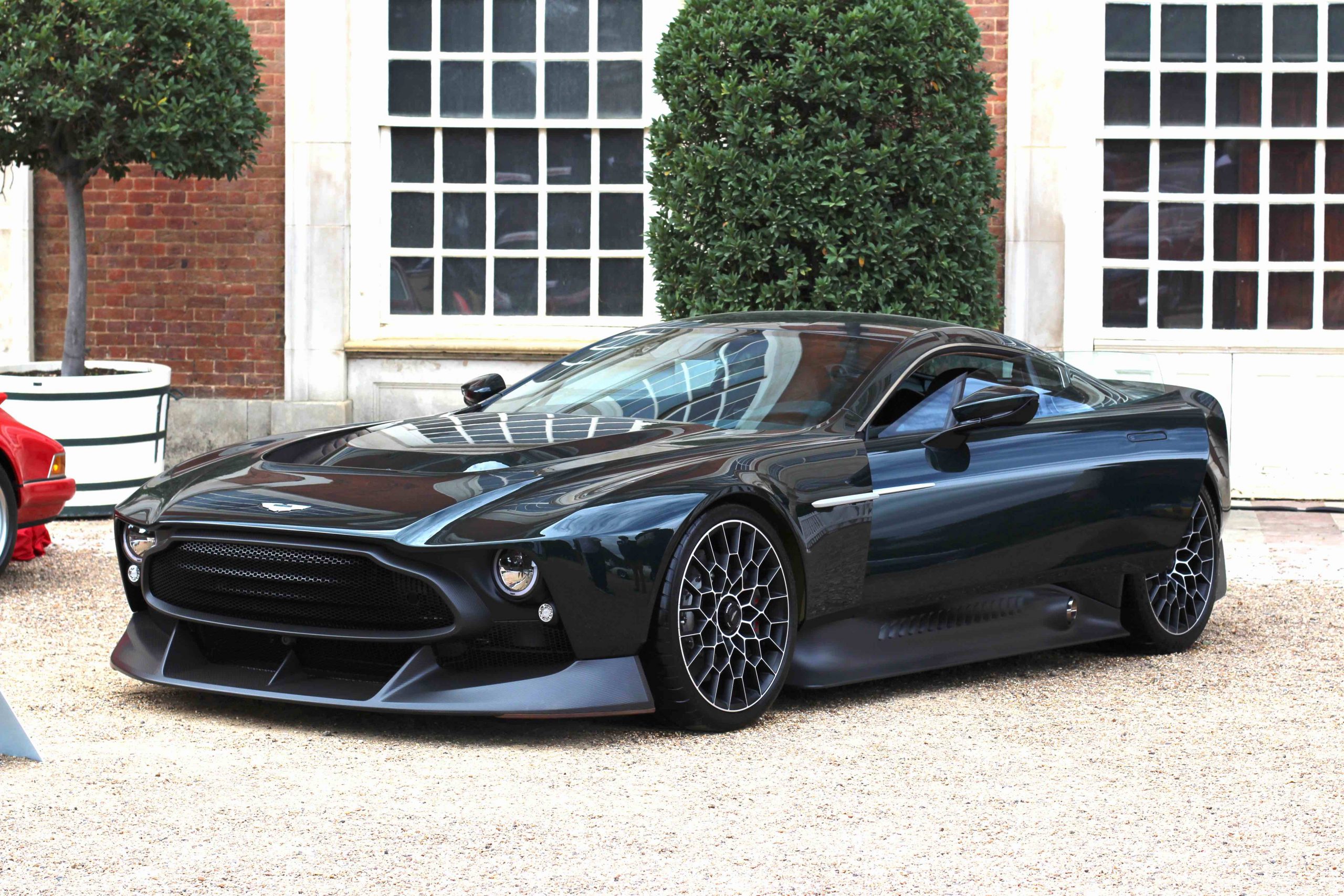 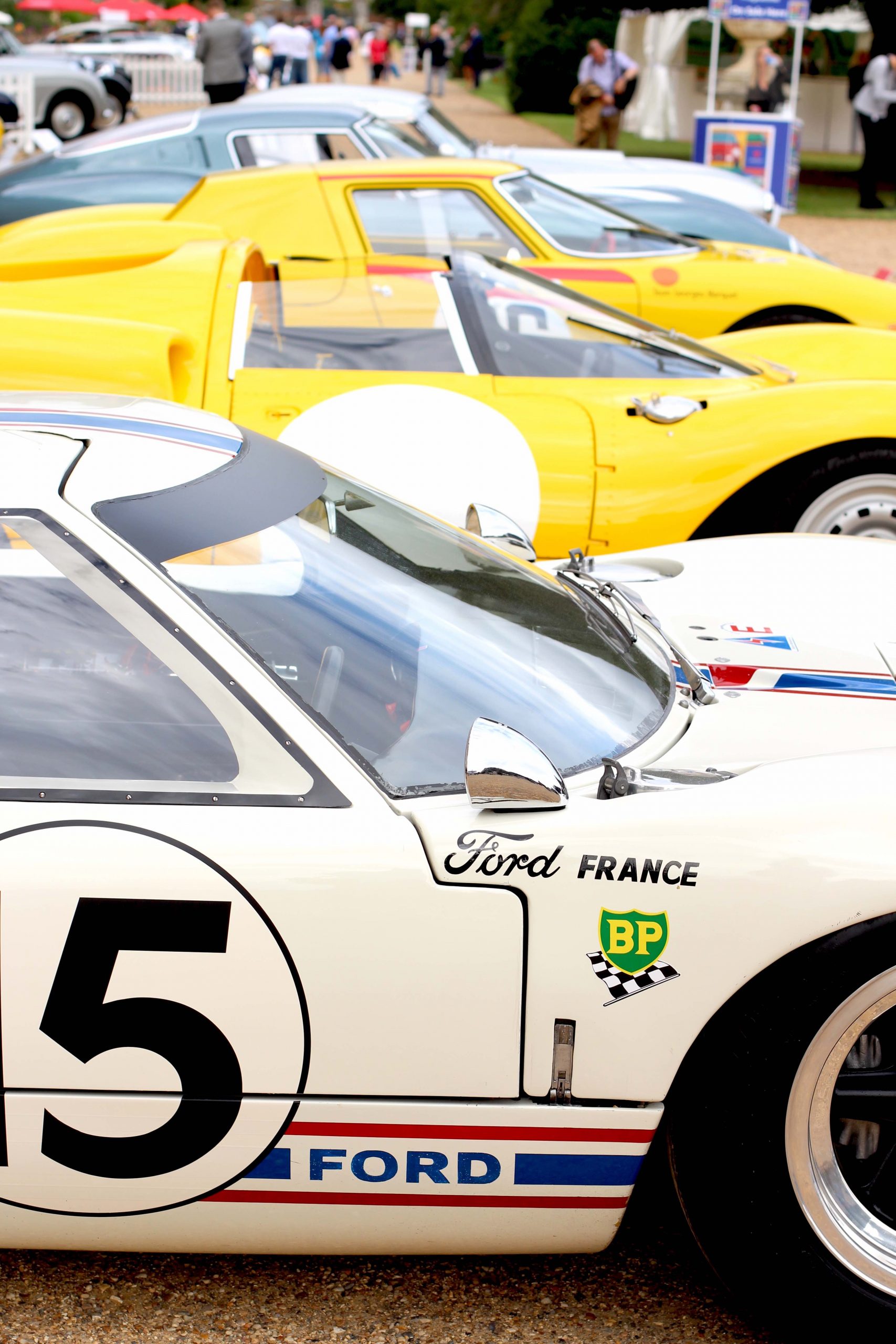