Goodwood calls it the world’s most exclusive race meeting: the 78th Goodwood Members’ Meeting is nearly upon us.

One of the three big motorsport events hosted on the Goodwood estate each year, alongside the Festival of Speed and the Revival, the Members’ Meeting returns after a Covid-enforced absence, and the team at Goodwood will no doubt waste no time in putting on the kind of show its members expect.

This year’s highlights includes a tribute to Ayrton Senna, to mark the 30th anniversary since Senna’s last F1 title. There will be both on and off-track displays of some of Ayrton Senna’s most iconic cars, including racing machines from McLaren, Brabham, Toleman, Lotus and even Williams. Elsewhere, there’s the chance to revel in the return of rallysprint, which had to be held behind closed doors during a Covid-impacted Goodwood SpeedWeek.

And as if that weren’t enough to pique your interest, the 2021 Members’ Meeting champions the rare Jaguar XJR-15 V12 one-make race car, with a dozen of the original race and road-going cars blasting around the track in a 12-minute demo run each day.

The Members’ Meeting is open to members and fellows of the Goodwood Road and Racing Club (GRRC), making it a smaller and more intimate (but no less exciting) meeting than the other flagship events, but if anything this puts even greater emphasis on the racing itself – and fans across the globe will still be able to tune in to Goodwood’s live feeds to catch the action.

When is the Members’ Meeting?

Things don’t end there however, as this year sees the introduction (following its preview at last year’s SpeedWeek) of a rally sprint. Practice starts at 6:30pm and the first timed event runs from 7:15pm until 7:45pm.

On Sunday, practicing begins at 9:30am with the Arundell Cup the first race, beginning at 10:50am. The on-track action concludes at 6pm as the final Gerry Marshall Trophy racers cross the line.

What will I see on track?

Perhaps the most anticipated racing takes place in the Gerry Marshall Trophy, which much like the St. Mary’s Trophy at the Revival is dedicated to tin-top touring cars – though in this case, cars from the 1970s and early 1980s. Think Rover SD1s, Chevy Camaros and of course the square-fronted Mini 1275GTs.

In the mix and somewhere at the sharp end of the grid you’ll find Hagerty’s very own James Wood, who will be pedalling the well-known 1980 Rover SD1 3500 which is owned by the Brooks Family, and always provides drift-tastic action. At 2019’s event, Wood shared the same car with Neel Jani, the Porsche factory driver and 2016 Le Mans winner. In the Gerry Marshall Trophy, the pair took second place during a race that was fraught with mechanical challenges, before being awarded victory the following day after the winning Boss Mustang was disqualified.

Elsewhere there’s the Pierpoint Cup rounding out Saturday’s racing and comprising pre-1966 V8 saloon cars. The S. F. Edge trophy for pre-‘23 Edwardian racers returns in its SpeedWeek format, with a pair of five-lap races, and the Earl Howe Trophy covers the subsequent motoring period, with cars up to 1933.

The Arundell Cup runs for pre-1964 Formula Juniors, with a Taylor Trophy class for drum-braked cars, and the Don Parker Trophy is a 15-minute sprint for 500cc Formula 3 cars. Faster action can be found in the Moss Trophy (1958-1962 GTs, including Cobras and E-Types) and Gurney Cup (45 minutes of GT40s, Lola T70s and more), while the Salvadori Cup and Ronnie Hoare Trophy cover an even broader spectrum of sports cars, the former including D-Types and Birdcages, the latter for ’60-’66 sports and GTs – think Triumph TR4s, 911 SWBs and Ferrari 275 GTBs. And if you prefer two wheels, the Hailwood Trophy covers 250, 350cc and this year early 1970s F750 motorcycles.

Oh, and don’t forget the rally sprint on parts of the circuit and service roads – with a variety of cars from several eras – and then the numerous demonstration runs across the weekend. Gordon Murray Automotive has also confirmed its T50 supercar – basically, the modern-day McLaren F1 – will make its public dynamic debut at the show.

Where can I watch?

Well, you could be there in person. If you’re not already a GRRC Member or Fellow, then you’ll need to join (it’s £43 for the year to become a Fellow) and then add £89 for an adult ticket or £22.25 if you either are, or are bringing along, a young person of 13-21. Tickets are now very limited this close to the event.

The easier method (well, if you have access to a computer or a smartphone, and if you don’t, how on earth are you reading this?) is to catch the whole thing on Goodwood’s YouTube channel, which will show every parade lap and race lap over the course of the weekend if Members’ Meeting, for GRRC Members and Fellows. Those that aren’t get a taster, with the first 30 minutes being aired for free.

Why should you go?

The Members’ Meeting may lack the fanfare of the Festival of Speed or the Revival, with neither the all-singing all-dancing variety of the former, nor the time machine feel of the latter. What it does have though is absolutely fantastic racing, much of it from eras that do not race at the Revival itself, such as the ‘70s-‘80s models in the Gerry Marshall Trophy – and for some, that alone is enough, tapping into a different vein of nostalgia from the postwar period of the Revival.

At the same time, star drivers are still in attendance, with the usual past masters and touring car stars, along with numerous talented owner-drivers. With the 78th running coming later in the year than usual, there’s the chance that weather may play a part too; if you think these cars slide around a bit normally, just wait until it rains.

And if you’re at the event itself, the more exclusive attendance list makes Goodwood much easier to navigate and a little less claustrophobic than the other headline events, without taking away from the atmosphere, which has its own appeal.

Take a tour of the world’s greatest car park
Goodwood Revival: Maria Costello gets the bug for racing cars 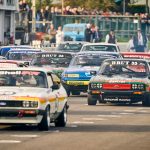