The 2020 London to Brighton Veteran Car Run is going ahead

Pull on a poncho, grab your crank handle and start your engines – the 2020 London to Brighton Veteran Car Run will be going ahead on Sunday, 1 November.

The event that sees cars built before 1905 take to the roads of the South East will begin with a rolling start on The Mall, in St James’s Park, London, from seven o’clock in the morning, before crossing the Thames and starting the 60 mile journey south to Brighton’s ever-distinctive seafront.

Passing through Brixton, Croydon and Coulsdon, it will continue on through Redhill, Gatwick and Cuckfield before finishing at Brighton’s Madeira Drive. Enthusiasts who wish to watch the event pass through the capital and the South East can chart the 2020 route here.

The London to Brighton Run was first performed in November 1896, to mark the introduction of the Light Locomotives on the Highway Act. The Act raised the speed limited for light locomotives not exceeding three tons, from 4mph to 14mph, and did away with the need for cars to be preceded by a man on foot waving a red flag.

To celebrate this motoring ‘emancipation’, The Motor Car Club of Britain, established by Daimler founder Harry Lawson, drove their cars from London to Brighton. Starting with breakfast at the Charing Cross Hotel, the run was initiated by Lord Winchelsea who symbolically tore a red flag in two.

It was discontinued in 1903, after the speed limit was raised to 20mph. But by 1927 it was back on our roads, and has taken place every November since, apart from the war years and 1947 when petrol was rationed.

Ben Cussons, chairman of the Royal Automobile Club, said, “It gives the Club enormous pleasure to be announcing this news and it’s wonderful that we are able to use the traditional London to Brighton route. The event will commence with a rolling start on The Mall and we wish every participant an unforgettable drive to Madeira Drive. It’s now full steam ahead to prepare for this year. I very much look forward to welcoming everyone in November and commemorating the 1896 Run.”

The day before the 2020 event, an International Concours d’Elegance for 100 of the entries will be staged on London’s Regent Street.

Maarten ten Holder, Executive Vice President and Head of Europe of RM Sotheby’s said: “It’s such fantastic news that the 2020 run will take place in November. We are excited to partner with such an iconic event and of course we very much hope that our sale in London, which coincides with the London to Brighton run, will be the first ‘live’ sale we can conduct in Europe since the pandemic hit.” 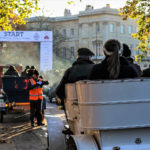