If you want to toss a verbal grenade into a room full of classic car enthusiasts, simply bring up electric vehicle (EV) conversions.

Good lordy it’s a divisive subject. To some, the perfect way of preserving classics and ensuring their viability well into the future. For others, you might as well not drive a classic at all – they argue an old car without its engine is like giving the ceiling of the Sistine Chapel a magnolia makeover.

It’s not today’s fashion to fall somewhere in the middle of two extremes, but having driven petrol-powered and electrified versions of classics – including a Beetle and an E-Type – I can see both sides of the argument.

I don’t relish the idea of all classics one day slinking silently around, but if it makes the difference between driving one at all, sign me up. If the conversion is fully reversible, or if the original engine was particularly recalcitrant, unpleasant or unreliable to start with, then I can see the motivation there too.

Lost in all this EV chatter though is a simpler solution – and it’s one already used to great effect by millions of vehicles around the world.

Before production EVs were available in any great number, the automotive world enjoyed – if that’s the right word – a decade or so of hybrid power. Hook an electric motor up to a petrol or diesel drivetrain, and you’d have, in theory at least, the best of both worlds: the long legs of internal combustion, with quieter, more economical running when the situation called for it.

Toyota’s method, pairing motor and engine through a power-blending planetary gearset, became the default method in production cars over time. But when it comes to hybrid classics, the greatest potential can be found in the method Honda used on its original Insight of 1999.

Honda called it Integrated Motor Assist (IMA). The Insight’s slimline electric motor sat within the gearbox bellhousing, effectively acting as the engine’s flywheel. Simple and space-efficient, the motor acted to assist the Insight’s 1-litre, three-cylinder petrol engine, as well as starting it up and shutting it down, and recuperating energy under deceleration.

In many ways, IMA operated in much the way electric bicycles, or e-bikes, do today. It sought not to replace the effort put in by an engine – or in an e-bike’s case, your legs – but supplement it, improving performance while reducing effort.

Most relevant of all for a potential classic application, IMA paired as happily with a row-your-own gearbox as it did with the optional CVT. While it couldn’t run in pure EV mode like a Prius*, the benefits were numerous. You get a significant boost in low-end torque (the tiny 1-litre produced its maximum twist at only 1500rpm once assisted), improved economy, and because the motor takes much of the strain low down, a longer engine life – Insights will happily do quarter of a million miles or more.

While the Honda’s remarkable economy (a real-world 70-plus mpg) was as much down to its slippery shape and lean-burn engine as its assistance, it’s surely the ideal setup for improving a classic car without removing its personality.

Let’s look through the benefits again. First, you’ve got a boost in low-end torque. Who among us wouldn’t like a little more of that, aiding the low-down driveability of our classics and perhaps masking any unhelpful behaviour due to recalcitrant carburation or poorly-chosen gearing? Or in the case of an e-bike, skinny and under-developed legs?

Economy? The less work an engine does, the less fuel it uses. Whether lugging or spinning, the motor takes some of the strain. One of the Insight’s numerous party tricks was that opening the throttle up a motorway incline would lean not on the engine, but on the motor. No downchange required when there’s an instant 20lb ft boost the moment you flex your ankle.

And that has benefits for the engine itself too, since every revolution of the crank is doing slightly less work than it would without help. If trudging slowly up hills or covering longer distances feels like it’s irreparably damaging your classic – we’ve all stared in fear at an ever-rising temperature gauge on an agonising incline – then the chance to extend those rebuild intervals is worth its weight in copper.

The challenge, of course, would be how to integrate all this. Honda lost money on every Insight it made, and you can bet not all of that was on the Buck Rogers bodywork. But low-budget electric assistance need not be complicated: witness the absolutely enormous market for e-bikes, where simple electric motors take the strain out of pedalling. The frame’s not full of ECUs – a sensor recognises when you start to pedal, and the motor spins accordingly.

Don’t think you’ll need to fill the boot with batteries, either. The engine’s still doing most of the work, just as your legs do on an e-bike. The Insight’s nickel metal hydride pack was maybe the size of its fuel tank and weighed around 30kg. No doubt, with modern lithium technology, you could match its output in an even smaller and easier-to-package solution.

There’s probably a good reason why the world’s classic enthusiasts aren’t rolling around in lightly-assisted MGBs, Porsche 914s and Alfa Spiders. Pick one, or several: no demand, no research budget, or simply no desire when the future looks inevitably electric. Plus, EV conversions will always win the numbers game: Bung a Tesla motor in there and YouTube-friendly tyre-toasting is there for the taking.

But if the idea of improving every aspect of your classic’s driveability appeals, without removing its beating heart, then perhaps it’s time to start asking for hybrid classic conversions. If nothing else, it’ll give us all something else to argue about…

*Nerdy clarification time: Technically, the Honda IMA system can operate solely on electric power, as it can be used to spin the crank while no fuel is being injected. But for simplicity’s sake, it doesn’t have an “EV mode” common to modern hybrids. 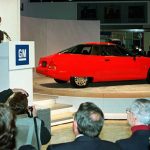