Things you perhaps don’t expect to say, while driving through a small village in South Wales, to your traveling companion: “The last time I was here was with Ayrton Senna.” The small village in question is Carno, a few miles outside of Newtown, Powys. It’s a one-road, straight through kind of place, and at first, I had trouble making the connection. The name rang a bell, but why?

Then it gradually came back. Carno was the home to Jan Churchill’s Welsh Forest Rally School. What’s that got to do with Ayrton Senna, you might well ask? It was here, 35 years ago, that Senna spent a couple of days getting to grips with five rally cars, for a magazine feature. How do I know? Because I was there.

Let me take you back to that unlikely moment in time when the world’s most promising driving in Formula One decided to sneak off for a dirty weekend of playing with rally cars, in a Welsh Forest…

A Saturday in September, 1986. Bleak, grey and blustery on a Welsh forest rally stage. It’s as incongruous a scene as to be almost made up. A Metro 6R4 blasts past, V6 quad cam’ yowling, stones spraying, at the wheel, not Malcolm Wilson or Tony Pond, but Ayrton Senna, keen to learn the dark arts of going sideways. And at the end of each run, journalist, Russell Bulgin, armed with a tape recorder to get Senna’s observations. Oh, and me, on the periphery.

Russell, was the editor of Cars and Car Conversions magazine. This was his gig – Senna was his mate. They had bonded while Russell was covering the Grand Prix circus for Motor magazine. It wouldn’t happen now. Me? I was just 20-years old and three weeks into my first job in publishing, with the nominal title of Designer/Editorial assistant on CCC ‘mag, as folk called it. I was supposed to be directing the pictures, in particular the all-important front cover shot. Indeed, tap ‘Ayrton Senna rally driver’ into Google, and you’ll find three minutes of grainy VHS footage of Senna posing for the camera in front of a selection of rally machinery. In the background comes a voice, my voice, asking Senna to pose in that cheesy, helmet-on-knee way drivers are often asked to do.

Back in 1986, Ayrton Senna was the next big thing. That he was going to be World Champion was an absolute given. The reputation and the mystique were already beginning to build and to prise him away from the day-to-day demands of F1 stardom – all without the permission of his employer, Lotus – was no mean feat. But Senna was his own man.

So here he was, devoid of entourage and ready to rock, rally and roll. It wasn’t all plain sailing, though. The story was supposed to be: Ayrton Senna – Group B Rally driver.

That’s right, 1986 was peak Group B, just before the wildest category rallying has ever seen imploded over safety standards for the drivers, co-drivers and spectators. The world’s fastest F1 driver wanted to drive the world’s fastest rally cars. And they were all supposed to be there, too. The line-up that had been arranged included a Ford RS200, Peugeot 205 T16, Lancia Delta S4 and a Metro 6R4. However, at the last minute three of the four manufacturers had cried off, leaving just Austin Rover to supply a Metro 6R4.

No matter, Russell was nothing if not resourceful. Being a Shropshire lad, he was soon on the blower to his Welsh rallying mates and assembled what was perhaps a more suitable learning curve of machinery in the shape of Harry Hockley’s Vauxhall Nova Challenge car, a GpA Ford Sierra Cosworth, GpA Vokswagen Golf GTi 16-valve, a home-brewed 4×4 Ford GA-powered Escort and the aforementioned 6R4.

If anything, this was probably more representative of the magazine. CCC, you see was rather more clubbie than Group B. Maybe that’s why the big guns didn’t turn up? Maybe corporate politics got in the way? Or perhaps the manufacturers couldn’t quite believe that this minnow of a ‘mag was really going to get Ayrton Senna to Wales to test their cars?

Getting Senna to Wales was an adventure. I was riding hot shoe, with Senna in his Mercedes 500 SEC as our convoy of two charged across southern England on a Friday afternoon cross country, to Wales. Russell led the way in his GTI Engineering Golf and Senna was co-driven by yours truly, trying to be as nonchalant but failing dismally in the presence of someone who was frankly other-worldly. All those stories about F1 drivers pulling crazy stunts on the road? All true!

Along the way, we even dropped in on Russell’s mum and dad in Ludlow, for a cup of tea, so they could meet Russell’s mate, Ayrton. In the tragic event of Senna’s death in 1994, Russell’s obituary stood out brilliantly from the crowd: “And there he was, leaning against the wall in my parent’s kitchen, talking about this and that, with my mum.”

And with that pitstop, back to the chase, quite literally. In the dark and on board with Russell I’m calling the route, with nearly two tons of Merc on our tail. After overtaking a slow-moving tractor, a very fast left-hand bend tightens, as in really tightens, and Russell loses the Golf and suddenly we’re going backwards on the wrong side of the road. And then, through comes Senna in a saaaaayyynnnnn–sational (as Murray would say) slide, laughing his head off and making a gesture that suggested we both enjoyed sex of a singular nature.

We arrive late at Carno and Jan Churchill’s Welsh Forest Rally School farmhouse base, where photographers Tony Butler and Norman Hodson, plus CCC Dep Ed, Martin Sharp are already installed around the cosy kitchen’s table. A beef stroganoff is devoured, a few bottles of red seem to evaporate. And while I’m not going to pilfer too many quotes from Russell’s award winning story, this does stand out: ‘And what was it Senna said over dinner last night, when he put down his fork halfway through his plate of stroganoff? In that cold tone which adds dulling emphasis to his steady words, he spelled out what he thought of rallying. “I know nothing about rallying. I’ve seen the pictures in magazines, sometimes watched it on television. And I deliberately haven’t listened to anyone about rally driving. I want to find out for myself.”’

And so, to Saturday. The convoy makes its way to the stage. A fallen tree blocks our path, but Senna is the first out to help manhandle it out of the way. And then there are five predominantly white rally cars parked up against a grey backdrop, but with an added dash and splash of Brazilian colour at the wheel. If there were anyone to witness this seemingly impossible scene, you would want to grab them, point and exclaim “Look! Ayrton Senna, here, in Wales!”

And that’s, perhaps, the most remarkable thing about the whole adventure. What went on, on that Welsh rally stage, stayed on that Welsh rally stage, until the November 1986 issue of CCC hit the Newstands. No one Tweeted, texted, Facebooked, blogged, live-streamed, or any of that other double-edged sword stuff that rules our modern world. Pictures were committed to film (mostly lost now), thoughts were gathered on magnetic tape and shaky video was shot on VHS. And Ayrton Senna drove a bunch of rally cars in private and won over the never the twain shall meet Welsh rally boyos, with skill, charm and charisma.

I’m not going to go into the blow by blow details of how Senna got to grips with the sideways art, that was Russell’s (award-winning) story, but to give you an idea of what Senna felt about the whole experience, the driving and the day itself, this quote will suffice: “Those people there, with the cars, they were curious to see what was going to happen. As much as I was. I felt that everybody was curious to see where I was going to go off the road, and, you know, what was going to happen. That was the fun. Because it was so unknown. Everything was so new there was a big question-mark. That feeling was the excitement.

And just like that it was 35 years ago. It seems like yesterday and an eternity all at the same time. And let’s not forget that the three main protagonists are all gone. Ayrton at Imola in 1994, Russell, tragically young in 2002, from cancer, and CCC magazine ran its final print run in 2003.

Oh, and Jan Churchill’s Welsh Forest Rally School is gone too. And I bet that no one in Carno is even remotely aware that Ayrton Senna came to visit.

The feature ‘Welsh Rarebit’ appeared in the November 1986 edition of Cars and Car Conversions. If you’re very lucky you might find a copy on eBay. After his death, a book simply called Bulgin: The Very Best of Russell Bulgin 1959-2002 was published in limited numbers, with the proceeds going to the Royal Marsden Hospital. This book also contains the Senna story. Find a copy, if you can.

Me? I still mess around with cars for a living and treasure the two days I spent on the periphery of Senna’s incredible life. My most treasured possession is a signed, framed in car picture of Senna from that day. On the glass, written using a gold paint pen, it says: To Steve, best wishes and thanks, Ayrton Senna.

Editor’s note: At the 78th Goodwood Members’ Meeting, on 16 and 17 October, a tribute to Ayrton Senna will mark 30 years since his last World Championship. By happy coincidence, it will also be the first time visitors get to watch the new rallysprint event.

The likely lads in a lock-up who made it to the F1 grid
When Stirling Moss cheated death in the Sahara desert
British touring stars: When the Capri, SD1 and Cosworth ruled saloon car racing 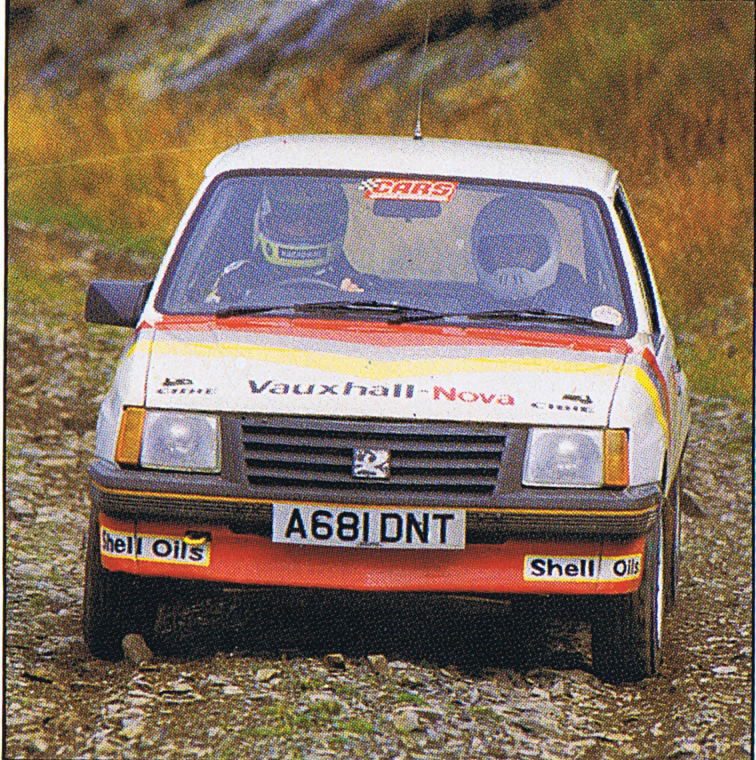