Losing the keys to a modern car is an inconvenience and an expense. Losing the keys to a classic car could be a nightmare and a costly expense, especially if the spare set has long gone, serial numbers haven’t been noted and keys have to be made to fit the locks and ignition barrel.

So it goes without saying that aside from having several spare sets made and kept in a safe place, the best thing to do would be to know where they are at all times. And by that we don’t mean the special drawer in the kitchen or a tin in the hallway of home. Instead, fit a key fob finder to the keyring and you should be able to find them when the time comes that you can’t remember where you last left them.

At least, that’s the claim from manufacturers of tracking devices that are now so small they wouldn’t look out of place on a keyring.

These key fob finders could prove far more useful than a leather fob with a logo. If you’ve lost keys in your garage or they fell out of a jacket pocket at a car show they could come to the rescue. And they don’t only need to be attached to keys; they could also be used as rudimentary tracking devices for your car, if you don’t want a more costly and dedicated version as detail in this buying guide.

There are two different types of key tracker and we have reviewed and rated the best-selling examples of both to see how they fared in a selection of ‘lost key’ situations.

Tags which use Bluetooth will connect to your phone and measure the strength of signal to direct you to your keys. They are generally very compact but will only work if your phone is within range of the keytag.

GPS tracker fobs are more sophisticated, incorporating a mobile phone SIM chip which will send the device’s location to an app on your smartphone. The downside is that they are bigger, have a subscription cost and, while they will tell you a general location, they won’t help you find the keys down to the last few metres.

To test them, we placed the tags in four different places which are likely to swallow keys. First, a laundry basket in a house. Second, under the seat of a car. The third challenge was on the table of a busy pub and the final place was in the undergrowth of a lightly-used country footpath.

Which is the best to help you lock down the location of your keys?

When Apple brings out a gadget the likelihood is it is going to be impressive, and certainly the AirTag is a very clever piece of kit. But, before we start – it will only work with Apple products. So if you don’t have an iPhone or iPad, you’ll have to consider a tag which uses similar technology such as a Tile. These don’t have some of the Apple’s snazzier features or the crowd-sourced finding power of millions of users.

To find your keys you first have to go into Apple’s ‘Find My’ app. If your tag is within range of the Bluetooth, it will point an arrow in the direction you need to go and display a distance – a little like kids telling you when you are warmer and hotter when finding something hidden. Once you are near, you can get the tag to make an audible chirp to help you locate it.

Using this method meant we found them easily in the laundry basket. The car seat was a little trickier, but once we were near the car it guided us in with no problems.

Finding the keys outside of the home is where the AirTag gets really clever. You enable a ‘lost’ mode on the app and the fob will wait for anyone with an Apple device to wander past within Bluetooth range. It will then briefly and anonymously hijack their phone to relay the location to a central server, which will then tell you where it is.

If someone with a newer iPhone happens to find and pick the tag up, they can tap it against their phone and it will display a message telling them to call you.

This worked exceptionally well when we left the keys in the pub, as we were able to see the location and knew where they were likely to have been left even before our finder pinged us.

The footpath took a little longer to find, although the location was narrowed down by a sucession of dog walkers passing by our hidden tag. This gave us a general area about of about 30m, which then allowed us to track it down using the Bluetooth proximity feature.

Vodafone’s Answer to key tracking is the Curve, which uses the mobile phone data network to transmit GPS data back to your phone app. The advantage of this over the Apple AirTag is that it’s not reliant on being near another device to record its location and it will work abroad too – so long as there is a decent mobile phone signal.

On the downside, even with the best mobile network reception it is only going to be able to narrow down the search to a house-sized area. Which is fine if it shows you’ve left them in the pub, but not so good if you are trying to find the tag in a laundry basket.

It’s a fair bit bulkier than the AirTag too, being around twice as bulky in all directions, making it about the size of a sectionally sliced golf ball. It’s still just about acceptable as a key fob, although it might ruin the cut of your suit a little when it’s in your pocket.

The fob needs to be charged around once a week, depending on which mode you use. In Power Saving mode the battery will last longer, with updates sent every two hours. At the other end of the scale is Live Tracking, which can only be used for 15 minutes at a time.

Even in the Live Tracking mode the response isn’t instant though, which could cause a few issues if you think your keys have been stolen or you suspect someone has driven off with them in their car by mistake.

In the tests, it only told us the general area of the laundry basket, pub and car seat, but it did at least give us some peace of mind and narrow down the search. It excelled in the country path test though, responding much faster than an Apple tag in an area which isn’t frequently used.

There is an ongoing cost for the data subscription though. The Curve itself costs £20, but you’ll need to pay a monthly fee which is £3 a month, or £2 if you commit to 24 months. On the plus side, the Curve does at least come with couple of options to attach the device to your keys, whereas Apple wants £35 for a key fob – more than the actual device itself.

Have you guessed what we’re going to say yet? In an ideal world, you’d want both of these devices on your keys. The Vodafone Curve would be able to track the position in real time and cover large areas instantly, while the AirTag could narrow it down to the last metre when you are nearby.

But that would be expensive and would make your keys too big to fit in your pocket. So if we had to choose one it would be the Apple AirTag. In 90 per cent of common key-loss situations it will be more useful at finding them than the Curve, it’s smaller, doesn’t need charging and it costs less to run too.

How to choose the best vehicle tracker for a car, bike or caravan
Reviewed and Rated: The best OBD readers and scanners in 2021
Reviewed & Rated: DAB adaptors for classic cars 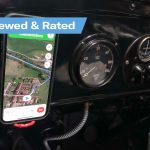 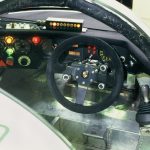