Something strange? Ghostbusters Ecto-1 values are on the up

When Ghostbusters hit cinemas in 1984 it was a lot more than just another fun-filled family romp. It went on to become a cultural phenomenon thanks to a ground-breaking blend of comedy, science fiction, horror and action. There was a sequel in 1989, a reboot in 2016 and now, nearly 30 years after the original, Ghostbusters: Afterlife has just been released.

As with so many great films, one of the stars of Ghostbusters was a car: a 1959 Cadillac, better known as Ecto-1. But Ghostbusters is really brought to life by Bill Murray and Dan Aykroyd playing former parapsychology professors who set up as a ghost removal service.

The second biggest film of 1984, Ghostbusters grossed $295 million (£219m) in its first run and is often considered one of the first movie blockbusters. It was the first comedy film to employ then-expensive special effects. It had a hit song by Ray Parker Junior in the soundtrack. And it was one of the first films to use merchandise for promotional purposes.

Along with the theme tune, one of the most enduring elements from the film is Ecto-1. The car has gone on to attain cult status, as distinctive as Ray Park Junior’s soundtrack – Who you gonna call? Ghostbusters! – and the overalls and proton pack used by the Ghostbusters team as they go about saving New York from supernatural disaster.

It means that the original prop cars used in the production of Ghostbusters have become highly prized, and valuable too. At the same time, a thriving market in replica Ectomobiles has sprung up. Hagerty investigates the mysterious goings-on…

One of the tools used to promote Ghostbusters to fans beyond cinemas was the car Murray and Aykroyd use to transport their ghostbusting kit around New York.

It’s based on a 1959 Cadillac Series 75 Commercial Chassis that coachbuilder Miller-Meteor turned into ambulances, hearses and in some instances both in one.

The Ectomobile ‑ Ecto-1 ‑ is based around a Miller-Meteor Futura model which had recumbent ‘passengers’ loaded through its tailgate. With its big fins, long creased bonnet and spats covering the rear wheels it borrows many of the design features from famous Caddies of the time such as the Eldorado.

Beneath the bonnet there’s a monster 390 cubic inch (6.4-litre) V8 engine for some spirited performance. And at 21 feet (6.4m) long there’s plenty of room for ghoul-zapping kit inside.

Ecto-1 is very rare and values are increasing

Only around 25 Miller-Meteor Futuras were ever built and at least two of those were owned by Sony and used in the Ghostbusters films. A third was bought for promotional purposes. Hagerty doesn’t carry the value of the 1959 Cadillac Series 75 Commercial Chassis but the average insured value for one now is $52,000 (£38,669).

Prices were clearly on the up more than a decade ago. In the intervening years, they’ve rocketed. For a genuine movie car, with a certified history, Hagerty now estimates the value to be in excess of $500,000 (£371,821).

Replicas are very valuable too

In the UK in 2014, a replica Ecto-1 was offered on eBay for £175,000. However, the owner of another replica, Peter Dale, tracked his tatty Ecto-1 down for £70,000. “I bought it within two hours of hearing it was coming up for sale,” he told us. Looking distinctly unloved, Dale has since spent around £80,000 restoring the car to its former glory.

Dale bought the car at the start of the first lockdown in 2020. “It had already been converted to Ecto-1 but had then been left to sit for a few years. The engine wasn’t running and it needed to be totally recommissioned,” he said.

Dale said: “Although it’s a very big car, it’s easy to drive. Visibility is great through all the glass and it’s got power steering and assisted brakes. Surprisingly for something so long, the turning circle is quite good.

“The biggest problem is that it attracts so much attention. You go to change lanes and there’s someone alongside filming on a smartphone so you have to have your wits about you.”

As with most 1950s American cars, the Cadillac is quite easy to mechanic. Dale said: “It’s got a huge engine bay and it’s all relatively simple. The standard Cadillac parts are easy to come by but some of the Ghostbusters parts are hard to get because so many people are trying to turn cars into replicas.”

Why did he buy it?

Dale, from Manchester, runs an online fancy dress company. But he also has a growing business renting out film and wedding cars. Included in his fleet are famous motors from Starsky and Hutch, Only Fools and Horses and Knightrider. And he’s building his own Batmobile.

But it’s Ecto-1 that is the spooky star of his fleet. “In the run up to Ghostbusters: Afterlife we’ve been using the car for a lot of promotional work for Sony,” he said. “We were at the premier in Leicester Square in London and we’ve been on This Morning when I showed Philip Schofield how to drive it.”

The new film will undoubtedly spirit up a new lease of life for Ecto-1.

The Midas Touch: The true value of a James Bond car
How Ronin out-drove other action films
Leap of faith: The Italian Job was Remy Julienne’s stunt spectacular 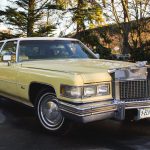 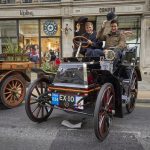