GTO Engineering, the British firm behind the acclaimed 250 SWB Revival – reviewed in all its glory here – has announced it will build an all-new sports car.

Dubbed Moderna (a play on modern and Modena) the car is a fresh design rather than a recreation of classic. That said, it has clearly been influenced by the Ferrari 250, with perhaps a touch of Zagato in the double-bubble roof.

The Ferrari specialist says the Moderna will be built on a conventional tubular steel chassis, with aluminium subframes, while suspension will be independent all round and braking will be by discs. The car’s shell will be made from carbon fibre to save weight, which is a first for GTO. The doors and bonnet will be aluminium to retain that sixties tactility. All-up the Moderna should come in at a featherweight 998kg.

GTO Engineering boss Mark Lyon says, “We’ve learnt from building the 250 SWB Revival, and working on a range of Ferraris, that a car’s weight and engine are two of the key ingredients to make a good sports car. So, we knew that this car should be under a tonne and powered by a quad-cam V12, an engine format we are familiar with and developing in-house.”

In its 250 SWB Revival, the company offers that V12 engine in three-litre, 3.5-litre, and four-litre forms, although the sweet spot seems to be the 320bhp 3.5, so that’s what will likely be fitted to the Moderna.

The Moderna will feature, er, modern electronics and lighting and each will be tailored to its owner’s desires. That means not only paint and trim, but even suspension and gearbox options.

Hand built in the UK, GTO Engineering says the car will be limited in number, but hasn’t quite decided what that number is. The company has built 40 of its 250 SWB Revivals over the last decade. 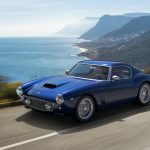 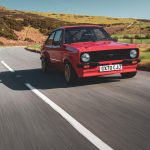