Why you want one: So you can imagine you’re touring the Cotswolds in 1959

Development of the Minor began at an odd time — 1943, when most of the world was preoccupied with news from Stalingrad, Tunisia and Guadalcanal. The prototype was named the Mosquito after the famous DeHavilland aircraft, and although not constructed out of plywood like the aircraft, it was also unique in that it was of unit construction.

Five years later (and after it was widened 4 inches, at the last minute) the Minor was launched at the 1948 London Motor Show, which also saw the debut of the Jaguar XK120. It was a testament to the advanced design of the Minor that it drew crowds nearly on par with the Jaguar. Like the Citroën DS in 1955, the entire development budget had been spent by the time designers got to the engine. Against Issigonis’s wishes, the car bowed with the ancient 23.5 bhp, 918cc Morris 8 side-valve engine.

The Minor was initially sold as a two-door saloon, a four-door saloon and a convertible, though with fixed side windows. A Traveller wagon (with wood-framed sides), a boxy van and a pickup truck were added in 1953. Headlights were initially fitted low in the grille but ran afoul of U.S. minimum headlight height laws and were raised to the tops of the fenders in 1949. The formation of the British Motor Corporation (BMC) from Austin and Morris in 1953 meant that the Minor had access to the much better Austin A-series overhead valve engine, but at 803 cc, it was no powerhouse. You could hard-boil an egg in the time it would take for the car to go 0-60 mph and about 65 mph was it – still 10 mph faster than the earlier car.

The A-series saw two displacement increases familiar to BMC fans, the first to 948 ccs and the second to 1098 ccs. The 1098 cars could do 0-60 in a blazing 25 seconds, but at least the unit was durable. Low oil pressure and a warning light that is slow to go out when started, accompanied by a low rumble, mean the bottom end is done for. Parts, however, are dirt cheap, and the engine can be pulled without a hoist by two rugby players. First gear is almost always noisy, but a box that jumps out of gear means trouble. Rib-cage remote-shifter transmissions are a smart upgrade.

Rust is another matter. Since it’s a unibody car, nearly everything is structural. The door bottoms, top of the rear fenders and the back of the front fenders are all rot spots. The spot on a two door just behind the door is also potentially a bad area, as the rear springs are bolted to the floor. The trunk floor next to the bumper is also rust prone, as are the inner fenders. Always raise a Minor on a hoist to check the sills, cross members, spring attachment points and floors. The wood is structural in a Traveller, so be very careful to check it out thoroughly.

BMC sold relatively few Minors in the U.S., perhaps because the car looked like pre-war transportation to Americans. Survivors tend to be the more amusing body styles, such as the convertible, or the Traveller. Most are running on the largest 1,275cc engines with disc brakes, in a vain attempt to keep up with modern traffic. An idiosyncrasy of Minor drum brakes is that aluminum pistons in aluminum wheel cylinders mean corrosion will stick them solid. Lots of pedal, no brakes.

Overall the Minor remains cheeky and easy to live with as a starter classic. Whereas a VW Beetle cabriolet is a very expensive restoration project, an unrusted Minor is cheap to freshen cosmetically and mechanically, and a Traveller with disc brakes and a 1275cc engine is a great way to advertise your pub.

As always, your best starting point to buy a Morris Minor is a good research book. The Essential Buyer’s Guide to the Morris Minor and 1000, by Ray Newell covers all models from 1952-71. The guidelines also apply to the 1948-51 model but they’re very rare these days, and you’ll be lucky to find one. The 640-page soft-cover book fits in a pocket and is extremely detailed, with a lot of “news you can use”, and profusely illustrated, as the Victorians used to say. It costs £9.99 or $19.95 from www.velocebooks.com. 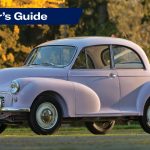 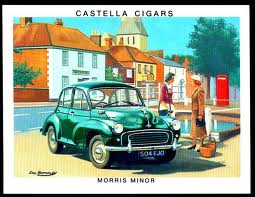 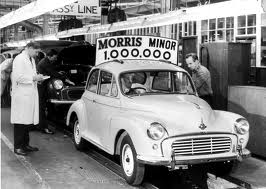