“I do not think anyone in the Honda concern really expected their car to shatter the racing world on its first appearance,” wrote Motor Sport’s Denis Jenkinson after the German Grand Prix in 1964. “But such is the publicity accrued from motorcycle racing successes, that the Grand Prix car was preceded by almost fanatical expectations which seemed to emanate from Europe rather than Japan!”

The reality, as the magazine’s reporter noted in his reflections on the race, was that the fearsome Nürburgring event was something of a learning exercise for the Japanese outfit, much as early forays into motorcycle racing at the Isle of Man Tourist Trophy had been.

Honda had entered five motorcycles in the 1959 TT – raising plenty of eyebrows, but no silverware – and wouldn’t taste victory in Grand Prix motorcycle racing until 1961 courtesy of Mike Hailwood. Honda wouldn’t win the TT until two years after the firm’s Formula One debut.

It was unrealistic then to expect Honda to sweep all asunder at one of the world’s most difficult Grands Prix. The team had attended Zandvoort a few weeks before, purely for testing purposes, but Germany would be the first racing outing for its first Formula One car, the RA271.

Viewed through a 2021 lens the RA271 is a beautiful and remarkable machine. Fitting into Formula One’s 1.5-litre rules from the period, Honda engineered an exquisite 1495cc 60-degree V12 and mounted it transversely. A spider’s web of exhaust manifolds emerged from the top of the chassis, and twelve intake trumpets for the motorcycle-derived carburettors sat inches from the driver’s head.

Honda’s early motorcycling exploits had concentrated on power, and that was the reasoning behind the RA271’s V12 too – estimated to produce somewhere north of 200bhp at roughly 12,500rpm… when it was working.

Jenkinson suggested though that the car was “not a pretty car, nor is it sleek and smooth, or even beautifully engineered.” In many respects Honda seemed to have brute-forced the car to fit their idea of the ideal Grand Prix racer, with a Lotus-style aluminium monocoque chassis at the front but with an engine mounted to a stressed bulkhead and a steel spaceframe aft of that. At 525kg, the result was a car 75kg heavier than the formula’s minimum weight limit.

In contrast its double-wishbone suspension front and rear was considered fairly conventional, though a pushrod system did allow Honda to mount the coilover spring and damper setup inside the bodywork at both ends.

At the race itself, Honda spent much of the qualifying morning diagnosing overheating problems, then suffering a misfire, and struggling to get anywhere close to its anticipated 13,000rpm engine speeds. It failed to complete the required laps, but an afternoon session – with the tiny V12 now howling as it should – allowed Honda some extra practice.

The car made no great impact in the race, though ran well initially, American driver Ronnie Bucknum overtaking several cars from his back-of-the-grid starting place. It was all over on lap 11 of 15 however, Bucknum spinning off before the Karussel and retiring with damage, though thankfully none to himself.

Honda would return again two races later, in Italy, much more on the pace, Bucknum securing 10th place in qualifying but once again retiring (this time with brake issues) in the race. The following United States Grand Prix went little better.

But Honda would not have to wait much longer to taste success. In 1965 it introduced the RA272, successor to the RA271, and after struggling early in the season, Richie Ginther took Honda to its first Grand Prix victory at the very last race of the season in Mexico. The company’s Formula One story might have peaked in the late 1980s, but it was the RA271 and RA272 two decades earlier that set the stage.

Freeze Frame: Lunar rover becomes the ultimate off-roader
Where the NSX succeeded, these 3 mid-engined Japanese moonshots failed
The likely lads in a lock-up who made it to the F1 grid 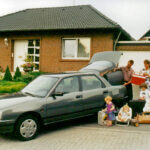