It’s now 50 years since a fledgling director by the name of Steven Spielberg introduced cinema-goers to a form of road-rage so menacing, yet utterly believable, that few would have enjoyed a relaxing drive home from the movie theatre without a second glance in their rear-view mirrors. That film was Duel, and not only did it put Spielberg’s talents on the map, but over the years it has rightly gained cult status.

Originally a TV film, but later extended to 90 minutes for cinema, Duel was shot in just 12 days. Dennis Weaver plays hapless salesman, David Mann, who, while on a long business trip, is preyed upon by an 18-wheeled Peterbilt truck. What makes the storyline – penned by Richard Matheson, and originally published in Playboy magazine – so compelling is that the terror that unfolds from the start of an unremarkable car trip could happen to anyone.

The automotive stars of Duel are perfectly cast. Mann’s Plymouth Valiant, the epitome of restraint with its humble 3.7 litre ‘slant-six’ engine, matches its owner’s urbane demeanour to a tee, while offering a juxtaposition with its nemesis.

And what a nemesis. “The art director had a sort of casting call for trucks,” recalls Steven Spielberg, discussing the making of Duel. “There were about seven semis waiting for me to cast the star of Duel.” A 1955 Peterbilt 281 petrol tanker was chosen because, said Spielberg, “…it had a face; the windows are the eyes, and it had a huge protruding snout… the wheels and bumper are the mouth.” Then the production crew set to making it look as menacing as possible, covering it in dirt, dead insects and oil stains between takes. And with its 10.5 litre, twin-turbo CAT engine producing over 300hp, the 13-gear Peterbilt could hit over 80mph, adding frightening authenticity to the film’s stunts.

Spielberg’s tenet underpinning Duel was simple: “The unseen is always more frightening than what you throw in the audience’s face.” Which is why, from Mann’s very first sight of the Peterbilt, the driver is unseen, and his motives for targeting him are never made clear. The film crew even dressed the truck’s trailer and cab with licence plates from various US states: “…the idea was to make the truck look like a veteran of these road crimes,” revealed Spielberg.

“Talk about pollution…”, exclaims Mann as he tries to pass the ‘Flammable’-signed tanker at the start of the film, black diesel fumes belching from the exhaust stack above its cab. But the acrid exhaust smell becomes the least of Mann’s problems as his journey across ever-more remote highways unfolds.

Cary Loftin, one of Hollywood’s most accomplished and talented stunt drivers, drove the Peterbilt in the film – although, other than an occasional arm-wave from the cab window to entice Mann’s Valiant into the path of oncoming traffic, you never actually see him. Fellow stunt driver Dale VanSickle doubled for Weaver in the Plymouth.

The cat and mouse action with the Plymouth and Peterbilt plays out across the California wilderness, the Plymouth’s bright red paintwork chosen to contrast with the dusty backdrop. No matter how hard Mann tries to evade the Peterbilt, the truck is always on his tail, either hitting him hard from behind at speed or trying to force him into the path of a goods train at a level crossing. And this is where the sheer quality of the production shines through. In the face of demands to film much of it indoors in a studio environment, Spielberg pushed back and said that he, “…wanted to shoot this all on location… I don’t want this if I have to go inside – it’ll look fake!”

Duel’s dramatic finale, shot in Mystery Mesa, California, saw stuntman Loftin’s talents pushed to their limits. As Mann’s beleaguered Plymouth succumbs to the desert heat he’s chased to a dead-end by the Peterbilt, in a showdown which Spielberg said was like “High Noon with a truck”. Mann wedges his briefcase against the car’s accelerator pedal and launches it head-on at the Peterbilt, engulfing the truck in flames as it explodes on impact, and obscuring the 300-foot precipice over which both vehicles descend.

But the stunt backfired. According to Loftin, the truck’s dead man’s handle (a failsafe device) was strapped back so the Peterbilt would continue to accelerate over the cliff when Loftin jumped from the cab. But the strap snapped, forcing him to drive almost to the edge of the cliff before leaping clear, and leaving a continuity error: the truck’s driver’s door is wide open as it tumbles into the valley.

Given the excellence of the final cut, it was no surprise that Spielberg went on to be one of the film industry’s greatest directors, and Duel a very early jewel in what was to become a sparkling crown. 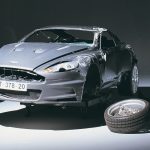 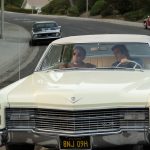