Hatches have got hotter. Lap times have tumbled, and Nürburgring records swap between car makers like hot potatoes. Arguably the car that first escalated this arms race was the 227bhp Renault Megane R26R of 2008 and it’s a race that continues with the latest 300bhp Megane RS Trophy R. Separated by over a decade of progress, how do these two rapid Renaults compare today?

It’s a question Hagerty set out to answer, in the best way possible – bringing together the Megane R26R and Megane Trophy R for some turbocharged action on the wonderfully open stretches of Tarmac that make their way across Salisbury Plain.

One is brand new and crammed full with the latest technical wizardry, a car very much born of the digital age. The other has a dozen years behind it and is well qualified for Future Classic status. When push comes to shove, and you cut to the core of this French duo, which does the best job of leaving drivers with a smile on their face and skip in their step?

Right car wrong time, that was the Megane R26R. In 2008 it was a revelation: a lighter, more agile version of the Megane R26 that proved itself on the Green Hell with a lap faster than a Porsche Cayman S. This was a feat of which Renault was so proud the R26 wore its 8:17 time as a badge of honour on its side windows.

The plan was to build 450 of the cars at the former Alpine factory in Dieppe and 230 were to be sold in the UK for £22,990 a pop, but the global financial crisis had other ideas. Just 159 made it to British enthusiasts.

Those that did get their cars were in for an experience like no other. Renault, of course, already had quite the reputation for heating up its hatches. From the first Gordinis, through the amazing 5 Turbos, the Clio Williams and V6s, The Reggie has gone to all manner of extremes in the search for speed.

For the R26R lightness would be the key to extracting the ultimate performance from the Megane platform. Renaultsport stripped 120kg out of the car when compared to the standard R26. The rear seats were thrown out and a half-cage bolted in, the back side windows were replaced with plastic and the bonnet was swapped for one made of carbon fibre. The front seats were switched for one-piece fixed-back race units, complete with Sabelt five-point harnesses.

Mechanically the changes were more subtle. The two-litre, 16-valve, turbocharged four-cylinder engine doled out the same 227bhp as the R26 (maybe a touch more with the optional titanium exhaust). The six-speed manual transmission was also as fitted to its lesser sibling, albeit with a slightly shorter lever, and the limited-slip differential was unchanged. Where Renaultsport got busy was in suspension tuning. Reducing weight allowed the engineers to soften front and rear springs rates by around ten per cent, whilst fitting more sophisticated dampers. The funky red alloy wheels were also shod with sticky Toyo track-focused tyres. Behind them sat beefy red-painted Brembo brake callipers.

Driving the Megane R26R is a special occasion every single time. It begins with the normally simple task of settling behind the wheel. You need to lift yourself over the high-sided bucket seat, and drop into it, then make sure you close the door before buckling into the harness or you won’t be able to reach the handle. The renegade racer vibe is palpable.

The engine starts with a pleasingly gruff note and a vibration that shimmers through the basic plastic dash and those plexiglass side windows. As soon have you rolled away for the first time you appreciate the car’s lightness of being. The steering feels initially a little over-assisted, but you soon come to trust it as you pick up the pace. And it has plenty of that.

From rest the R26R will hit 62mph in six seconds, putting its power down surprisingly cleanly for a front-wheel drive machine. And it will do so on seemingly any surface, race-track smooth or B-road bumpy. The suspension is miraculously compliant, the car taking bumps and lumps in its stride. The grip from those Toyo tyres is stupendous and the stopping power from the Brembos is right up there with modern machinery – something that often betrays a car’s age.

And what’s this? No need to choose between driving modes, throttle response or steering weight? All you have to decide is whether or not to cancel the ESP system – and trust us, you will.

There’s a delightful adjustability in the chassis, and like all the best racy Renaults it will lift a rear wheel in aggressive cornering. Jump out of the throttle mid-corner and the car will rotate just enough for you to apply a little corrective lock and get back on the power. All the while, you’re feeling what’s happening through the seat of your pants. It’s an intuitive plaything, one that encourages you to explore the limits and work it harder and harder as each mile rolls beneath its sticky Toyota tyres.

Meanwhile the soundtrack is one of whooshes and whistles from the turbo, with a few pops and bangs from the exhaust on the over-run thrown in for good measure.

Finding fault, the gearchange isn’t as slick as it could be and the plastics used are pretty low rent, but the Megane R26R still makes a very solid case for itself today. It’s just modern enough to be reassuring, but feels refreshingly pure and unfiltered in its manners thanks to all those efforts to save weight and dial in the chassis. Yet despite this it’s not too taxing on a long run, meaning that Anglesey track day you always fancied need not be out of reach.

For now, at least, the price isn’t too out of reach either with decent examples available from around £16,000. It may have taken a decade, but the R26R’s time has come. It’s a high point on the timeline of the hot hatch.

There are plenty of people who just won’t ‘get’ the Renault Megane RS Trophy R. They’ll puzzle at the decals, peer through the rear windows and wonder who stole the back seat. They’ll hear the pops and crackles of the exhaust and think that a tune-up is in order. They’ll discover the £50,000-plus price and assume that someone moved a decimal point.

And that’s just fine, because the Renault Megane RS Trophy R is not for the many. It’s for the few. The very few. Only 500 have been made and of them just 32 have reached the UK. There are more LaFerraris (36) in Britain than Trophy Rs. Rarity alone should guarantee this hottest of hot hatchbacks future classic status, but there are so many more reasons that this rocket Renault will be worth hanging on to.

This is a car that smashed the production front-wheel-drive lap record at the Nürburgring with a time of 7:40.1. It also topped the charts at Spa and Suzuka (although Honda just snatched that back with a Civic Type R Special Edition). And it didn’t do this with brute force, the Trophy R actually has the same engine as the standard Trophy. Instead the speed comes through attention to detail, saving weight, improving aerodynamics, suspension and braking. Some stickier tyres don’t hurt either.

But let’s begin with the engine. The turbocharged 1.8-litre four-cylinder produces 300hp which is good for 0-62mph in 5.4 seconds. But that’s only three tenths faster than a regular Trophy. Power is delivered to the front wheels through a six-speed manual transmission even though paddleshifts would be quicker. Why take that approach? The manual gearbox is lighter.

And lightness is something that RenaultSport took very seriously, just as it did with the R26R. The Trophy R is 130kg lighter than the Trophy. It uses thinner glass and, most noticeably does without rear seats. There’s a sizeable brace across the rear, webbing net and space for a full set of spare wheels and tyres. Should you wish, Renault will sell you carbon wheels to save another 2kg at each corner. The front seats are Sabelt composite buckets and can be fitted with full six-point harnesses. And the centre touch screen is smaller than a regular Megane’s to shave a few more grams.

From the outside you’ll also spot the lightweight carbon fibre bonnet, complete with NACA duct which sends air, not to the engine, but beneath the car to serve the aerodynamics. The carbon rear diffuser chips in here to create downforce. The lightweight Akrapovič exhaust system is the final touch.

Under the skin the biggest changes are to the suspension and brakes. Adjustable Ohlins dampers are fitted all round, and the active rear steering fitted to other Meganes has been dropped to save weight and provide a bit more stability. Braking is taken care of by giant 335mm Brembo discs, while ceramic discs and gold callipers are a pricey upgrade.

Start adding all these components up and you begin to understand why the Trophy R is so expensive, but does it feel it to drive?

In a word, yes. The first time you turn the Alcantara steering wheel with purpose you’ll appreciate the engineering that has gone into this thing. It has been designed to carry speed through corners like few others. I cannot say that I ever got close to running out of grip on the road, despite piling into bends faster than I thought possible. And when you need to shed speed those huge brakes are extraordinary. What a weapon this thing must be on a circuit. Yet, despite this purity of purpose the Trophy R has kept its air conditioning and infotainment system, so you could live with it as daily driver.

There’s a small ‘but’ though. The new machine feels like a product of the digital age by comparison to its forebear. It’s fantastic when weighed against its contemporaries, but can’t match the R26R for its natural, organic feel.

Renault chose to launch this car early in the current Megane’s lifespan, partly to get it out before tighter emissions rules would throttle it or force the use of an automatic gearbox like the Mini JCW GP. There’s definitely a feeling of this Trophy R being one of the last of its kind and, if you need another reason to believe this is a future classic, that might just be it. 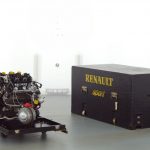 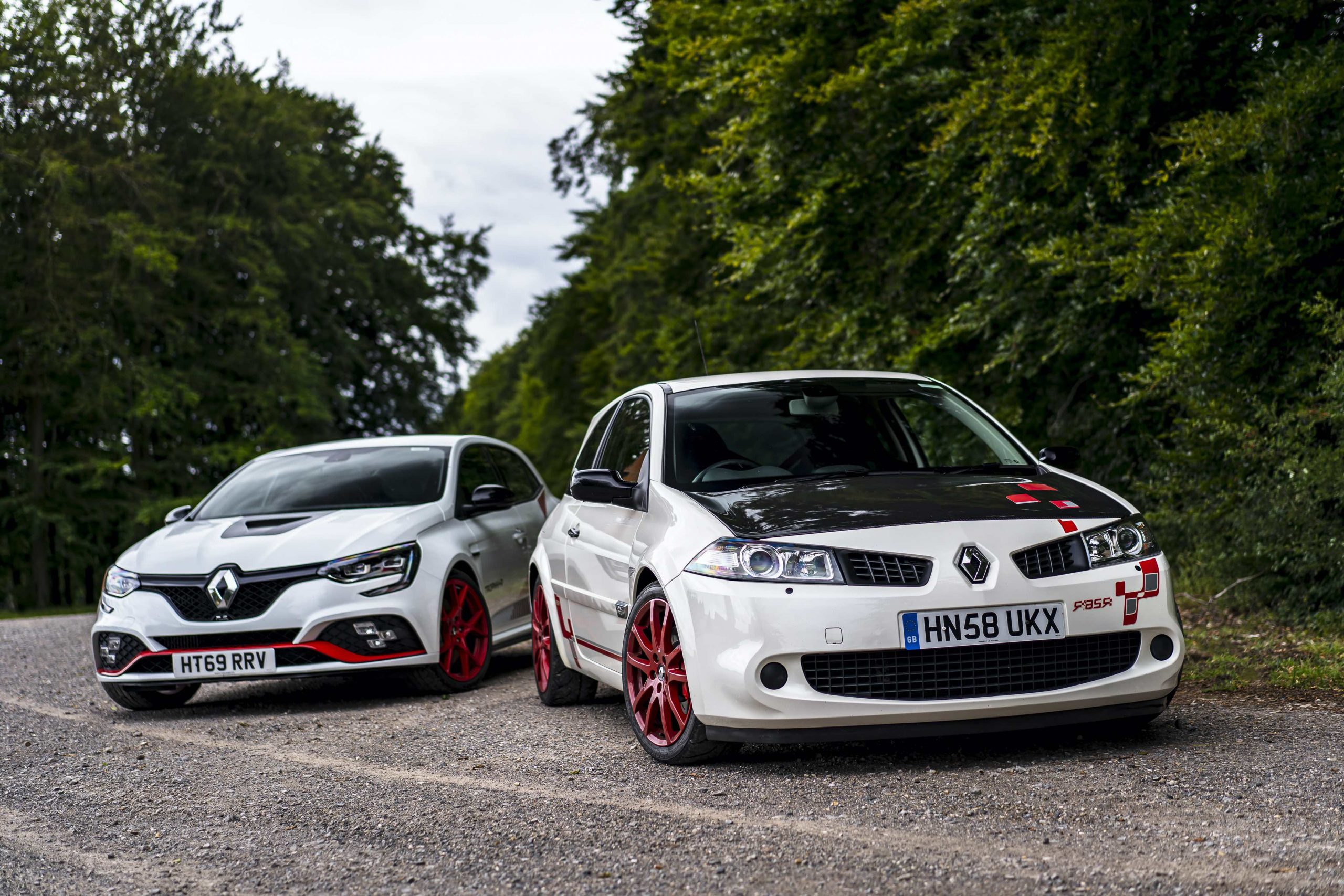 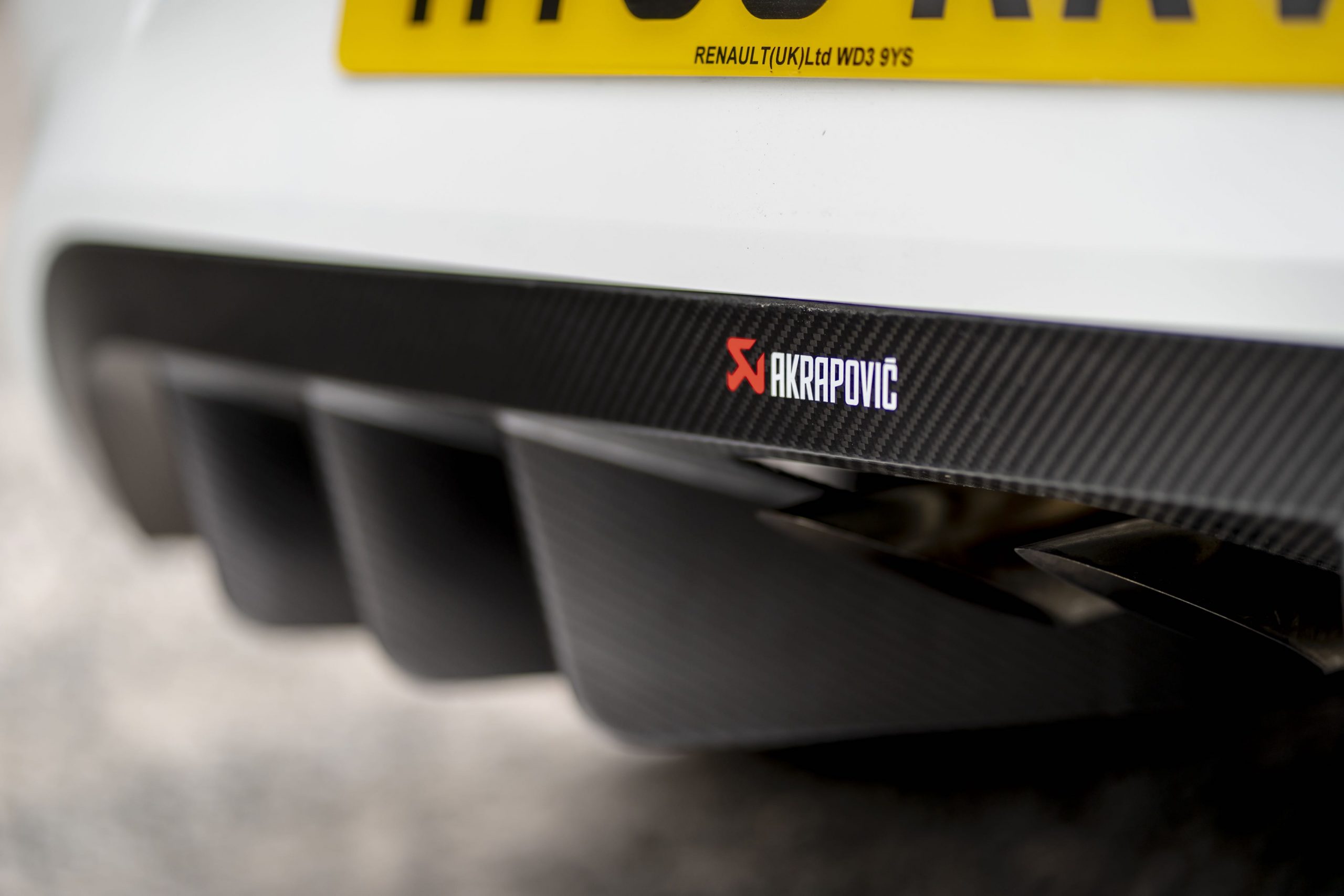 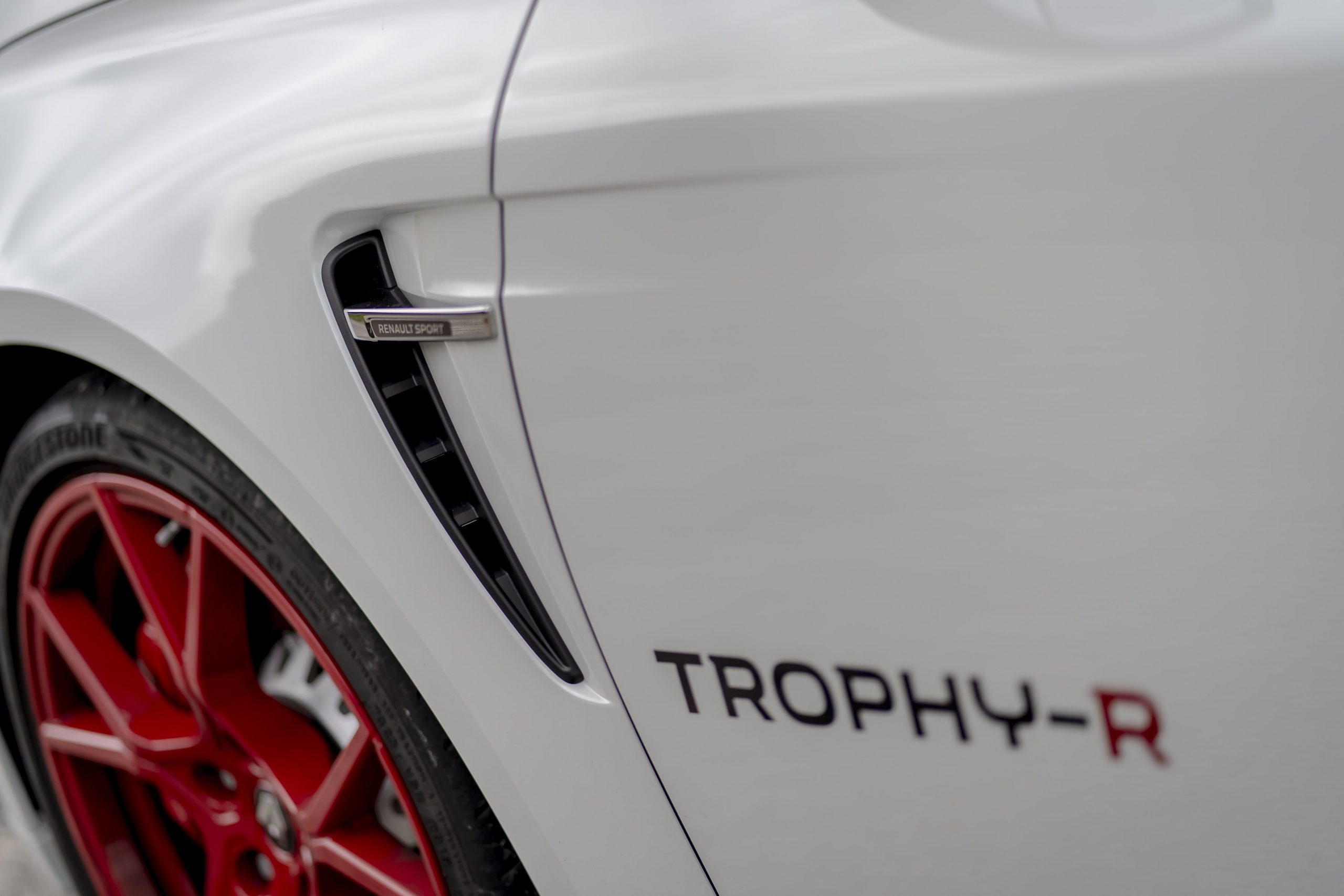 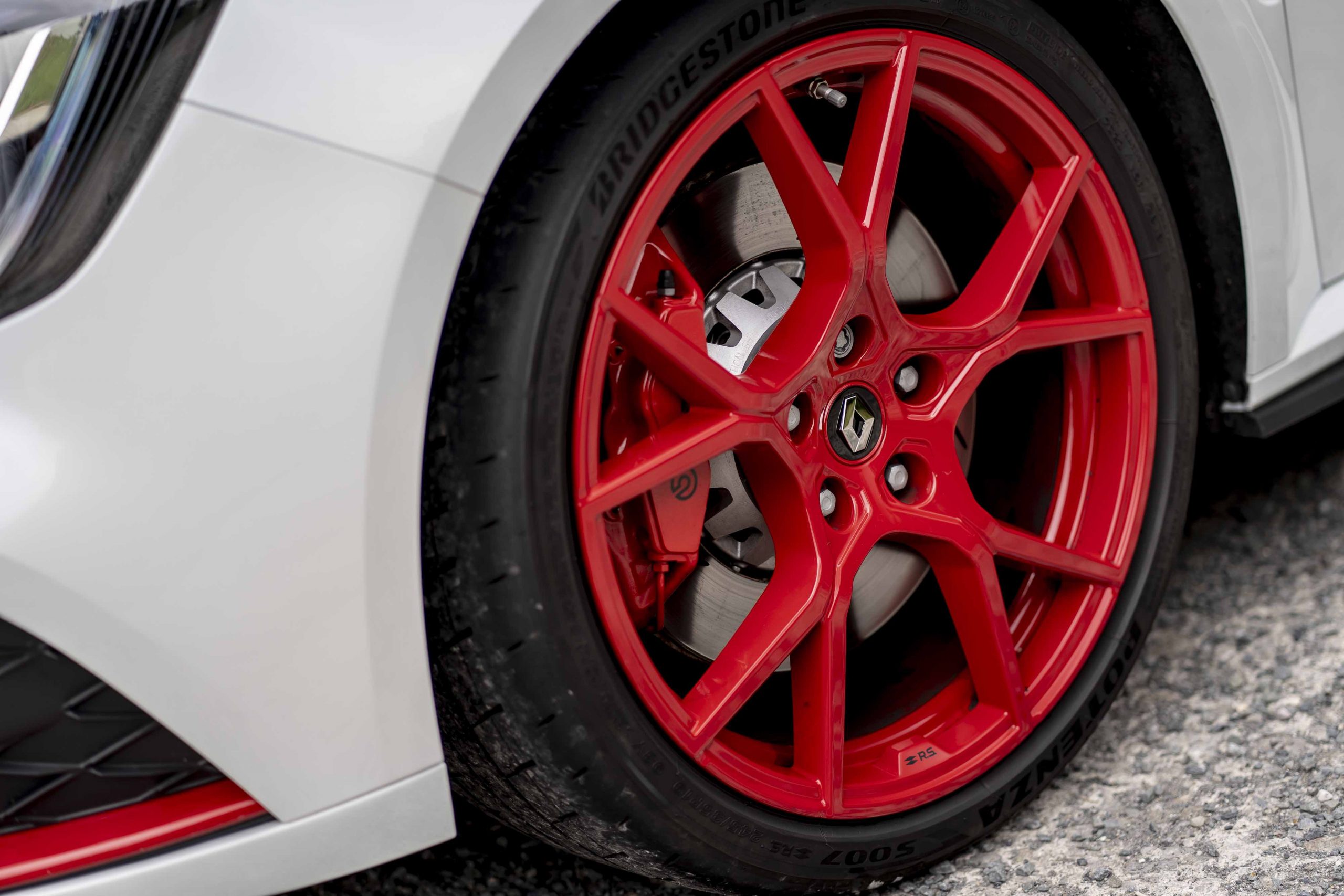 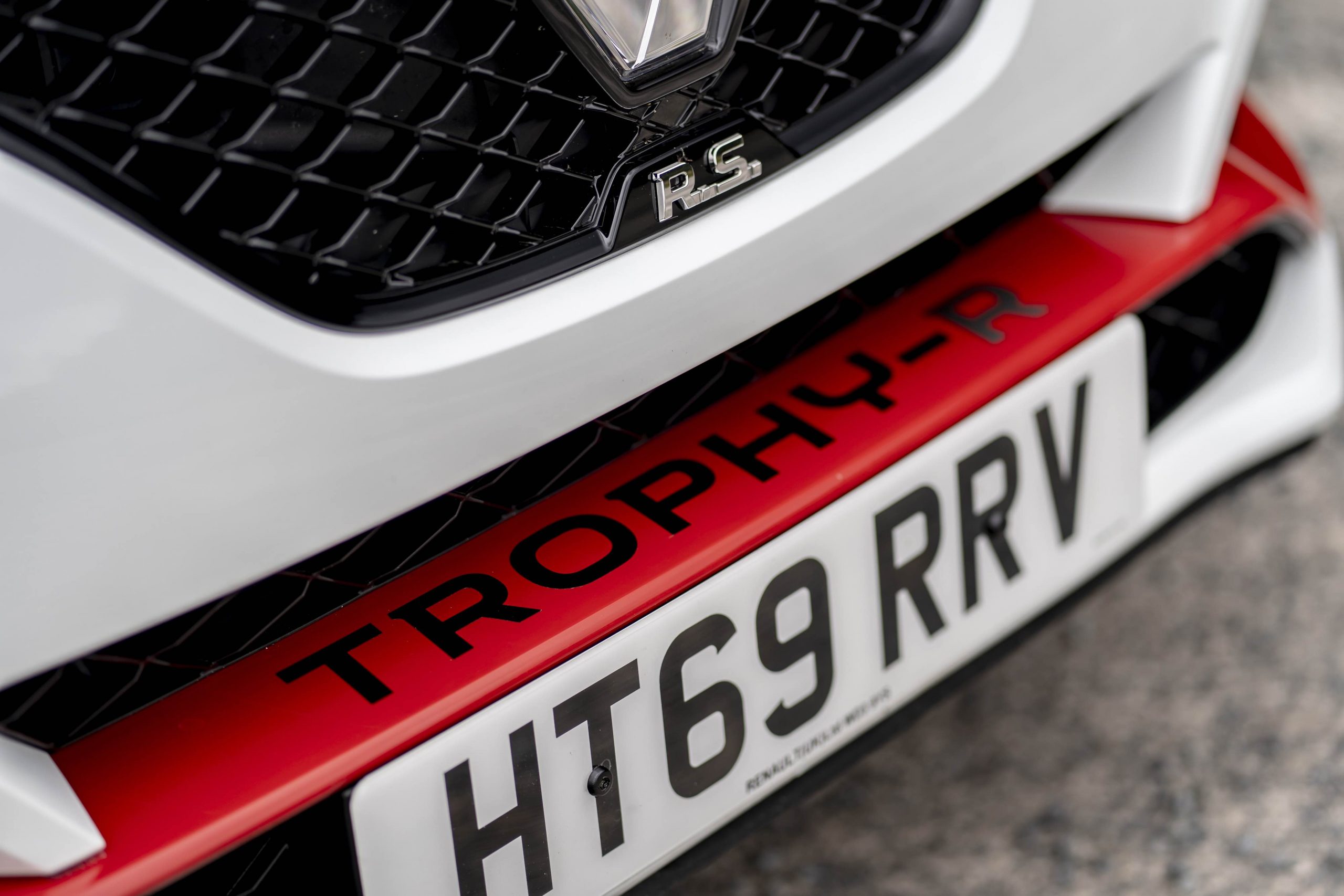 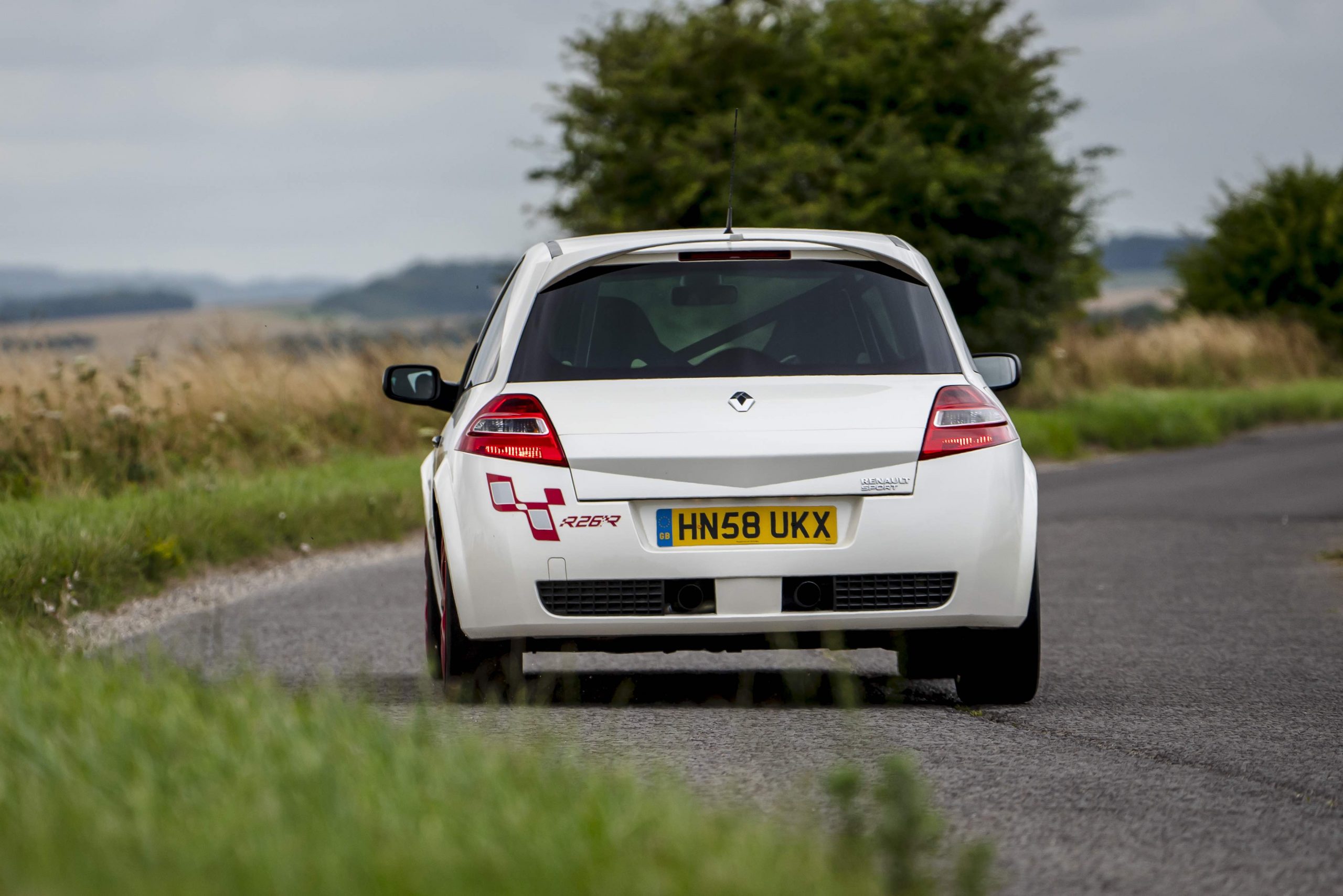 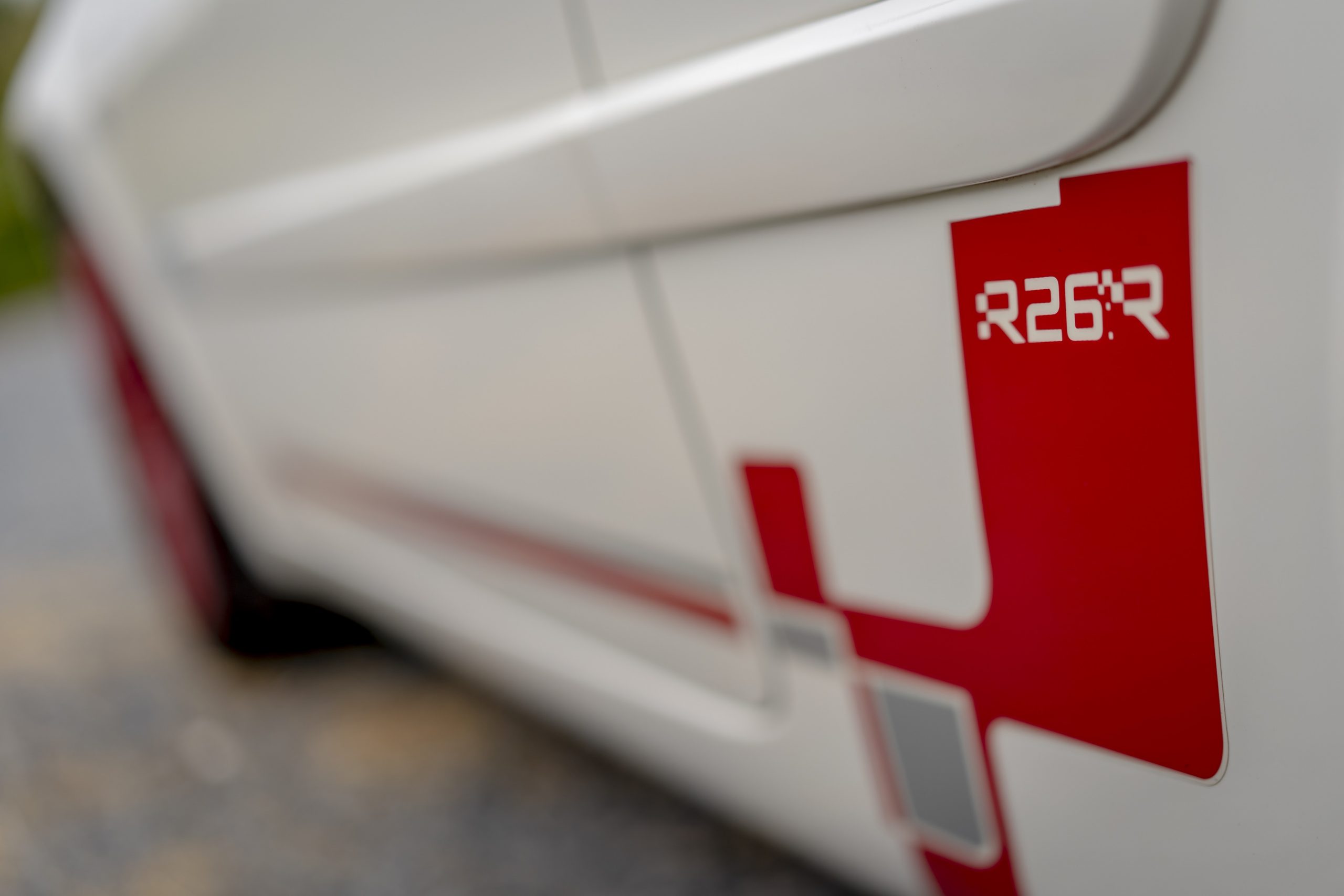 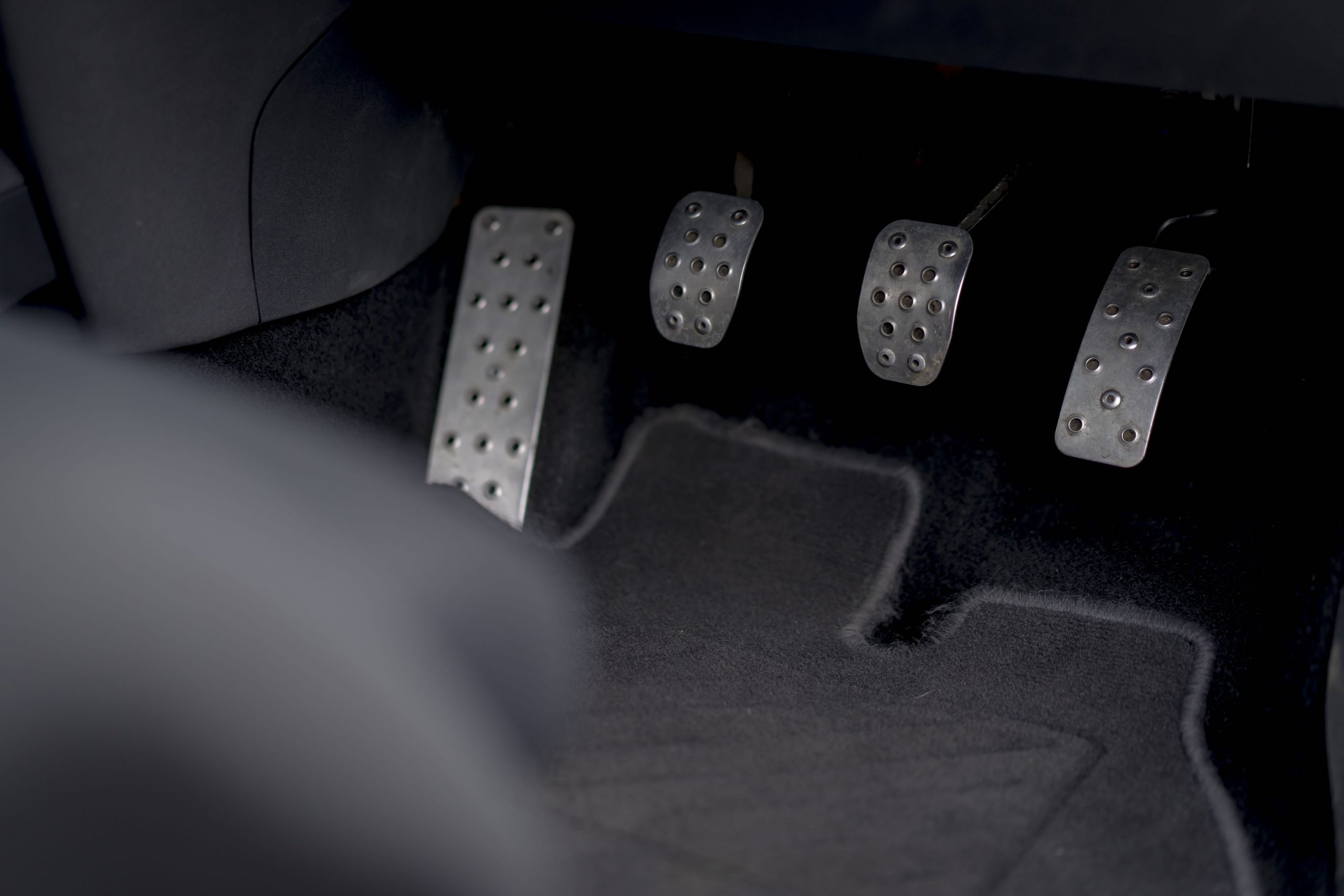 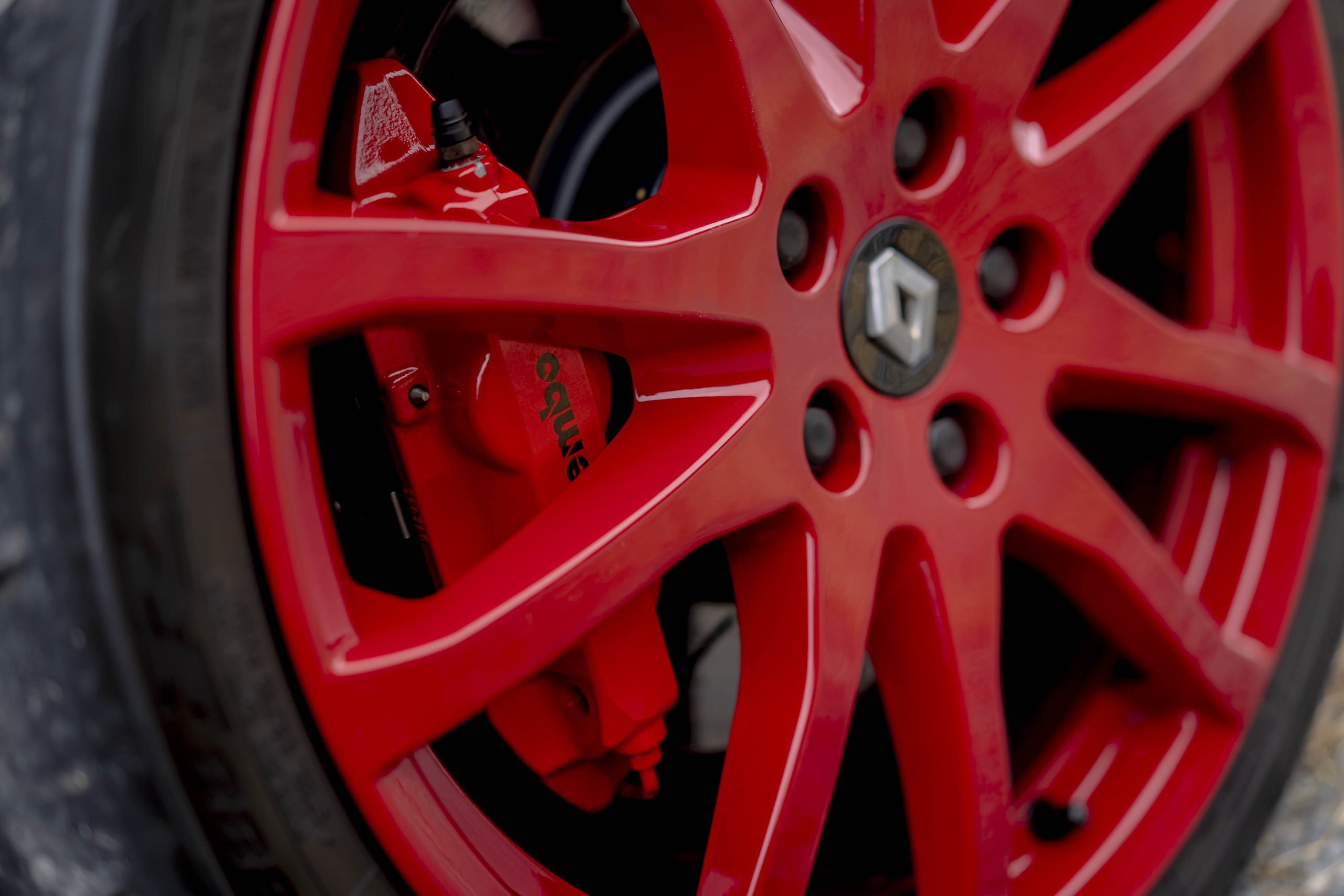 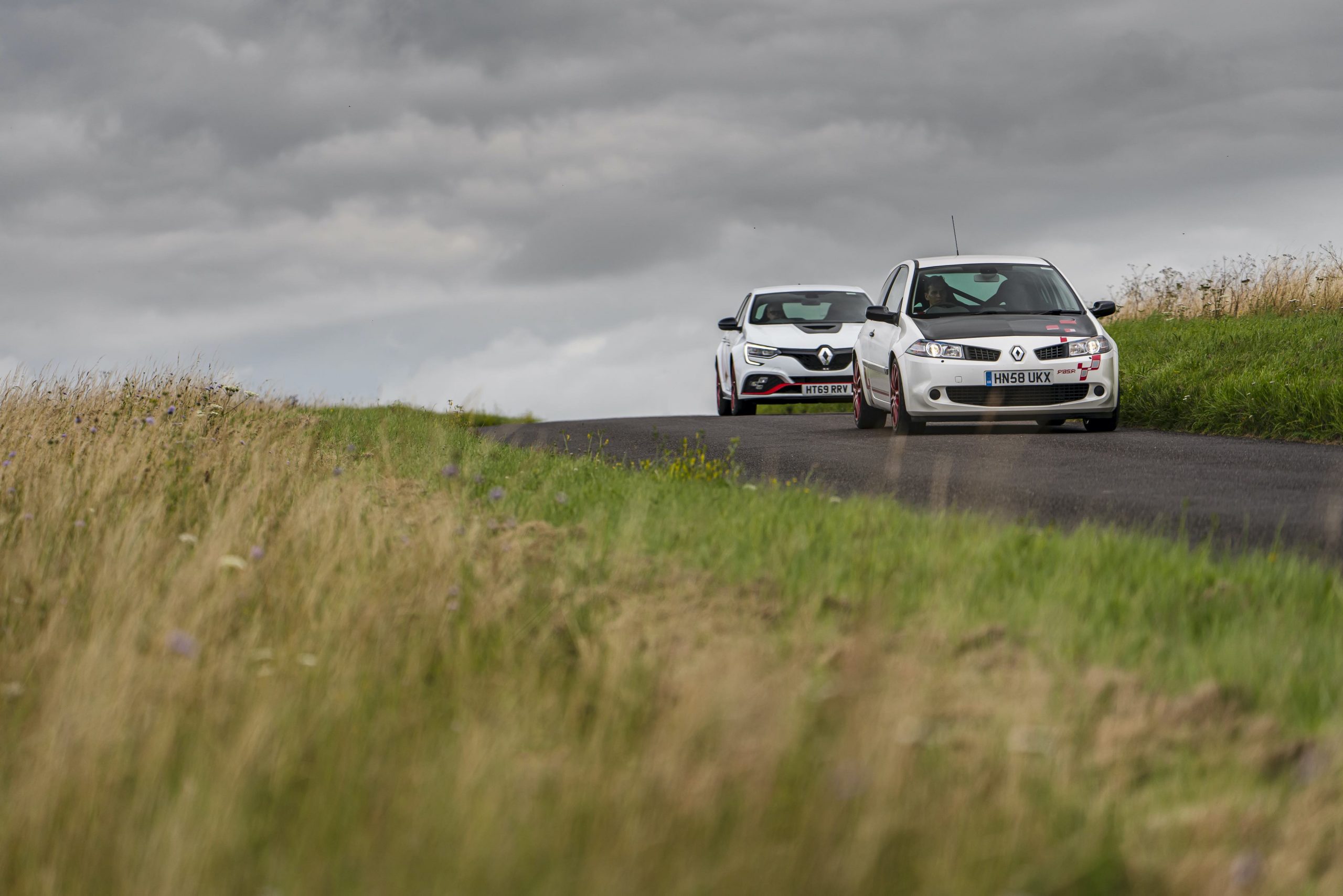