If you owned a Mini in the 1960s but wanted it to look a little different from your neighbour’s, then the name Radford was probably near the top of your mind.

The Beatles, Mike Nesmith of The Monkees, James Garner, Britt Ekland… all had Minis tweaked by Radford. The brand had actually been creating coachbuilt specials since 1948 though, and we’ll soon be getting another taste of what the company is capable of as the Radford name has been brought back to life – with Jenson Button and Ant Anstead at the wheel.

Radford makes its return in 2021 courtesy of Ant Anstead, the bloke from the telly who is handy with a spanner or two, Jenson Button, the F1 world champion, Mark Stubbs, a designer and Roger Behle, a business adviser and lawyer. One commission is already underway, the renewed Radford hoping to compete at the highest level with bespoke products and new luxury cars.

Founded by Harold Radford in 1948, the company originally concentrated on offering coachbuilt Rolls-Royce and Bentley models, including striking commissions like the wooden-panelled Bentley MkVI Countryman that debuted at the London Motor Show in 1951.

It was also involved in creating fibreglass bodywork for a prototype of the Ford GT40 – part of a complicated process where the car bounced between the coachbuilder and designers Lola, returning to Radford to be trimmed and have its glass fitted.

Radford is perhaps best known though for its boutique Mini commissions from 1963 onwards – such as the hatchback conversion in this list of the top Mini conversions. Almost anything was on the table, from the wicker-effect sides on the car Peter Sellers bought for Britt Ekland, to custom paintwork. Motor Sport magazine noted in 1963 that all conversions took place on Cooper models, “presumably because the weight of extras would make the ordinary Mini too slow…”

Minis will no doubt be on the table once again for those with the means, but the refreshed Radford has announced it’s already working on its first commission. There are no clues what that might be, but with Button onboard there’s sure to be a focus on the cars driving as well as they’re designed and built. 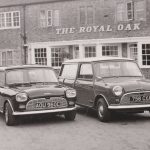