Mercedes S-Class: a history of firsts

It’s new S-Class day. Mercedes is launching its next generation of flagship saloon, and it arrives packed with innovative technology said to make driving easier, safer, swifter and more luxurious. Just as it has always done, as you can see from this brief history of S-Class firsts.

By today’s standards the original W116 S-Class is hardly a pinnacle of safety, but back in 1972 its padded steering wheel and window surrounds, together with a rainwater-draining windscreen design were all innovations.

The W126 wasn’t the first car to be fitted with anti-lock brakes – that honour goes to the Jensen FF – but it was the first car to introduce reliable ABS. In 1981 Mercedes added to the safety measures with a standard-fit driver’s airbag along with seatbelt pre-tensioners.

The S-Class of 1991 brought ESP (Electronic Stability Program) which utilised the ABS system to brake individual wheels and contain a skid should the big Benz get out of control. In 1996 Brake Assist was added, which boosted pressure in the system if the car detected an emergency stop, after Mercedes’ engineers discovered that people often just don’t press the pedal hard enough to avoid a collision.

By now Mercedes had loaded the S-Class with an array of sensors to make driving more relaxing, prevent accidents and, should that fail, make the car even safer in an impact. In 1998 Distronic adaptive cruise control was offered, which would maintain a safe distance from the car in front on main roads. In 2002 the first iteration of Pre-Safe was fitted. If sensors detected an accident, the car would close its windows and sunroof, and even adjust the seats so that airbags and seatbelt pre-tensioners would be more effective. 2005 saw the introduction of night vision, which may not have been a Mercedes invention, but having the display within the instrument panel made it more useful than others.

The outgoing S-Class came with a whole host of further comfort and safety systems. At launch it was the first car to feature all-LED lighting, inside and out. It boasted heated massage seats, a perfume dispenser, and system that would scan the road surface to prime the suspension for any bumps ahead. In 2018 the W222 was upgraded with Magic Body Control proactive suspension, and Energising Comfort Control which brought together mood lighting, music, climate control and the scent dispenser with a range of programs to boost your mood with a multi-sensory experience. 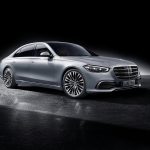