It felt like a good A-to-B speed, one you’d not be too surprised to see from the average outside-lane-tramping 3-series or A4 on the way to their next cladding conference or software seminar. Nothing too outrageous, just usefully distance-shrinking. But what feels routine in a mid-range repmobile seems more adventurous in an early-1970s coupé like the Datsun 240Z.

You expect classics – most of them – to be meek and underequipped for the demands of modern driving, where superminis comfortably out-sprint the average ‘60s sportster.

But the 240Z just lapped it up, straight six throbbing away mid-tachometer, steering tracking true, and brakes hauling off speed – albeit with old-school pedal pressure – when someone dawdled out in front. The 240Z feels made for this kind of driving.

Probably because it was made for this kind of driving, though Nissan’s designers and engineers more likely had Highway 1 than the M11 in mind when poring over sketches and technical drawings in the late 1960s.

The man with the vision was Mr. K. Officially, his name was Yutaka Katayama, Datsun’s envoy to the United States in the 1960s, who convinced top brass to set up a US operation and made some shrewd decisions on what to sell there.

Mr. K liked sports cars. Americans did too, and had spent most of the 1950s and 1960s buying tiny two-seaters, both open-topped and fixed-roof, in vast numbers. It was a remarkable time; flip open a copy of Road & Track from the era and there was a road test on something sleek and lightweight and European virtually every month. Readers would write in and complain if they dared to dedicate space to some lump of American iron and chrome.

Katayama sensed opportunity in this, and after a few stalled attempts to hook US consumers on Nissan’s products, struck gold with 1963’s Sports 1500, known as the Fairlady in Japan. The 1500, and later 1600 and 2000 became wildly successful, thanks in part to Sports Car Club of America (SCCA) racing success from the likes of Pete Brock and his BRE outfit.

There was room though for more power, more cylinders, more performance. Europe, and Britain in particular, covered the low end of the sports car market brilliantly. And with a serious-looking briefcase and a call to the right people you could put say, a Mercedes SL, or a Ferrari 275 in front of your mid-century mansion. Datsun wouldn’t be competing there.

Between was domain of the pony car. Corvette aside America didn’t really “do” sports cars, creating a missing middle for those who preferred corners to straights. And Mr. K thought Datsun could give them both.

The design, long-of-hood and short of tail in the best sports car traditions, is largely credited to Yoshihiko Matsuo. A German designer, Albrecht Graf von Goertz – the man behind BMW’s 507 – is often referenced, and might have been responsible for some early conceptual sketches, but it’s safer to call the Z’s styling a collaborative effort. If the team could make it work, Katayama could sure as hell make it sell.

Some see a bit of E-type in there. It’s a fair call; Nissan did get hold of one to evaluate its packaging when devising the Z’s shape. Testers at the time saw some Porsche 911, a touch of Toyota 2000GT (another of von Goertz’s shapes, incidentally), even a hint of Ferrari 275 GTB.

Given the US focus, it’s fair to assume Nissan had at least one eye on the Corvette Stingray too, though you’d be hard-pressed to see it in the details. The 240Z is restrained, almost dainty in some ways, though today it makes a Triumph GT6 look disjointed and an MGC somewhat insubstantial and austere. In the West Coast sunlight, it punched above its weight.

A strict two-seater – at least at first – the S30-generation 240Z’s monocoque prioritised space for its two occupants and held a decent luggage capacity, despite a shape shorter than a 911 by around an inch, and an E-Type by a foot. Interestingly, the shape also generated negative lift, contributing to a grown-up feel at speed, alien to most Japanese cars of the period but much appreciated by American customers.

Those customers were also used to high performance, and here too the Z delivered. With much of the body length dedicated to the engine bay, Nissan dropped in a 2.4-litre, single-overhead cam inline six plucked from the home-market Cedric and Skyline saloons.

With twin carbs and 150bhp the engine couldn’t quite top an all-American V8 but certainly matched similar sixes for output, and was bolted to a four-speed manual transmission – though a five-speed manual and three-speed auto eventually followed. Suspension was a mix of tried-and-trusted MacPherson struts up front and novel-for-a-Nissan Chapman struts and wide lower A-arms at the rear.

If there was genius though it was not in the 240Z’s mechanical layout, but its marketing. Here was a car that, at around $3500 in the US (and £2288 in the UK after taxes), was similar in price to an MGB GT, but offered performance on par with a Porsche 911.

Road & Track rushed past 60mph in 8.7 seconds and recorded 122mph flat out. Autocar went even better, extracting a 0-60mph time of eight seconds flat and a two-way average of 125mph. Either set of numbers would give a 911T a fright. Your MGB-driving neighbour wouldn’t see which way the Datsun went, and though a TR6 might nibble at the Datsun’s heels on the straights, its chassis – trailing arms and lever-arm dampers at the back – was more like a pair of wellies to the 240Z’s training shoes.

No better demonstration of the 240Z’s prowess could be found than on North America’s race tracks. Pete Brock, already experienced with Datsun’s roadsters, turned the Z into an instant race-winner, his white, red and blue Zee-cars taking SCCA ‘C production’ titles in 1970 and 1971.

Out on the east coast Bob Sharp Racing found similar success, with the likes of Paul Newman behind the wheel. On-track success boosted Datsun’s image further and showroom success inevitably followed, justifying Mr. K’s gamble. The Z even tested its other star quality, that of durability, in rallying: a beefed-up 240Z took victory at the East African Safari Rally in 1973.

After a few days behind the wheel, the car’s qualities as an all-rounder are as vivid as the primrose paintwork. I recently chatted to a friend, who reckoned the earliest car she’d be happy driving every day would be something from the 1980s. I nodded sagely, but driving the Z, with its roots in the 1960s, the old Datsun might just have changed my mind.

This 1974 car from Nissan’s UK heritage fleet wears a set of triple Webers rather than the original twin SUs. Prod the throttle before twisting the key and it fires with little more effort than something modern, preferring light pressure on the pedal while it warms to any movement of the choke lever mounted between the seats. There’s a bit of time to admire that spacious cabin – good seating position, slim three-spoke wheel, that trio of sunken gauges atop the dashboard – and then you’re good to go.

What prompts that daily-musing is how it’s just as happy trickling along in traffic as it is being muscled around a few corners. Last time I drove this car it stammered a bit from low revs and objected to anything other than full throttle. Maybe it’s the warmer weather or some tweaking by the heritage garage, but it’s now pleasingly tractable. You can’t just snap open the butterflies like something fuel-injected, but lean into the pedal and there’s a deep-chested surge at odds with its five decades.

No doubt it felt faster in its day than it does now, but half-distracted by that lovely triple-carb gurgle-turned-howl (and maybe by the fumes) it feels more than quick enough. And long-legged too, as hinted at the start – like those early road tests suggest, you’d not think twice about taking it into three figures where the law allowed.

It helps that it’s so stable at speed, that it cruises without much commotion, and that the brakes feel up to the job of stopping you again. That solidity is matched by a robust-feeling gearbox (a slick-shifting five-speed in this car) and a firm but controlled ride, but even more so by the steering.

It does, as early road tests hinted, make you work for it. It isn’t so bad around town, with sensible gearing that lets you park the thing without working up a sweat, and it’s reassuringly calm when you’re creating holes in the air at outside-lane speeds. But take a few corners like you’re channelling John Morton – the American racing driver who mastered the Z, amongst other cars – and the Z demands a firm hand.

This tempers your enthusiasm to start with. Turn in, feel the weight build like someone has dropped a sack of potatoes in your arms, and you’ll probably back off again, dissuaded from pushing too hard. Push on and there’s plenty more grip to give and, when the tyres do begin to let go, a lovely benign balance. If you’ve ever driven an early MX-5, you’ll recognise it; the newer Mazda’s lighter touch just lets you exploit it with a little less effort.

Once keyed-in though you can throw the Zee around in the way its makers intended. Squeeze the brakes and tweak the throttle for a few satisfying whaaaaarps as you snick a lower gear, get that upper body working to pick your apex, feel front and rear tyres both doing their job as the body leans, and throttle up early, confident the independent rear won’t snap. String a few corners together and it’s involving, edifying, and as moreish as Intergalactic Coca-Cola.

Usable, dependable, a match for more exotic machinery on the road and a proven race winner off it, it’s no surprise the Z became a legend in its own lifetime. More than half-million S30 Zee-cars found homes in nine years.

Only with the S130 chassis launched in 1978 did the nameplate stumble. A new grand-touring focus chipped away at previous Zs’ keen-driving qualities, and the styling trappings of the 1970s didn’t so much gild von Goertz and Matsuo’s lily as cover it in rhinestones and pinstripes.

Early Zs are prized today. The fifteen grand that would once have got a tidy 240 is now barely enough for a scruffy example, and the best 240Zs – not including the rare and wildly valuable Z432 with its four-valve, triple-carb, twin-cam 2-litre from the ’60s Skyline GT-R – can fetch as much as £46,000.

For a car with the Z’s range of talents however – be that carving corners or hassling sales reps in the outside lane – it feels like a small price to pay. 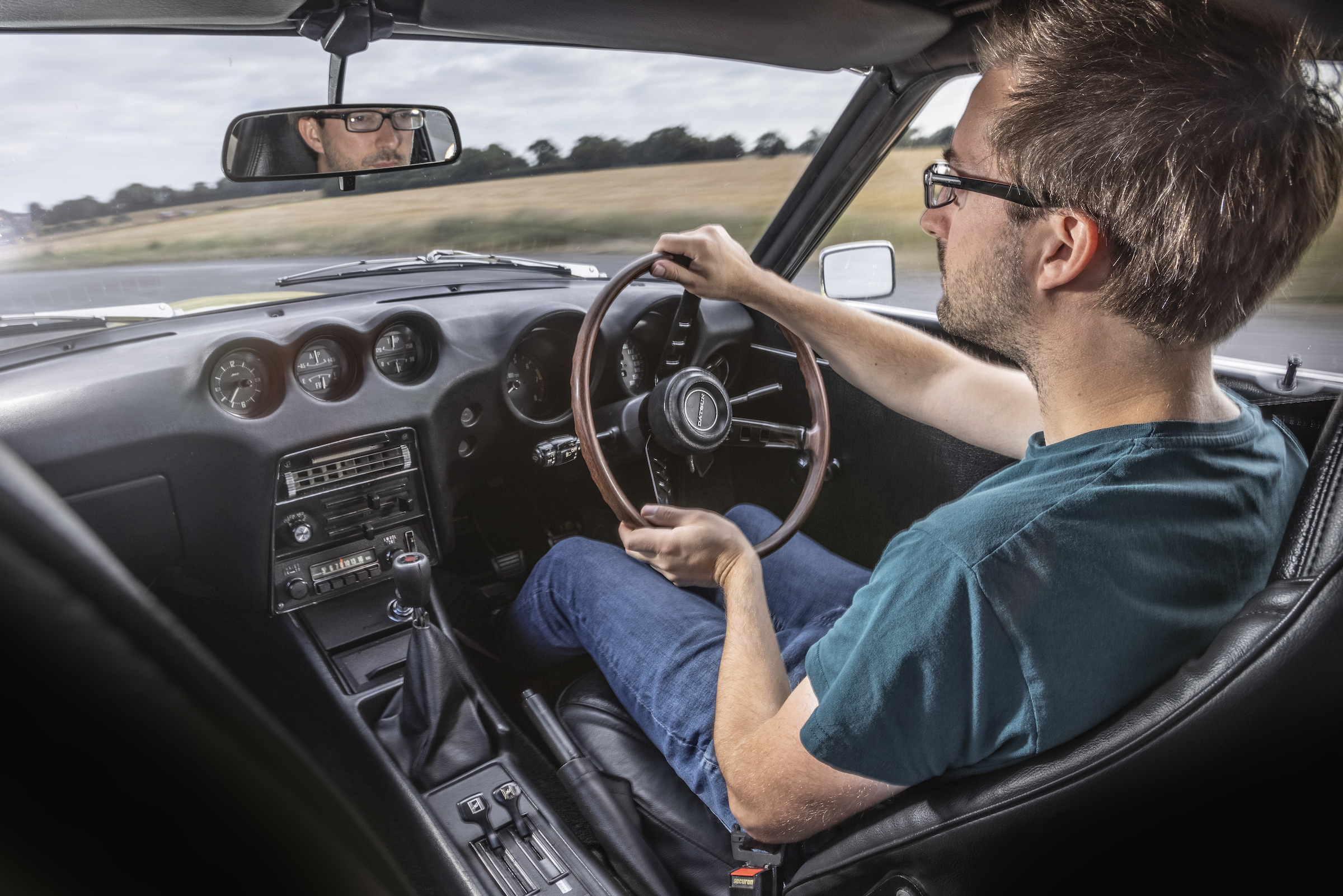 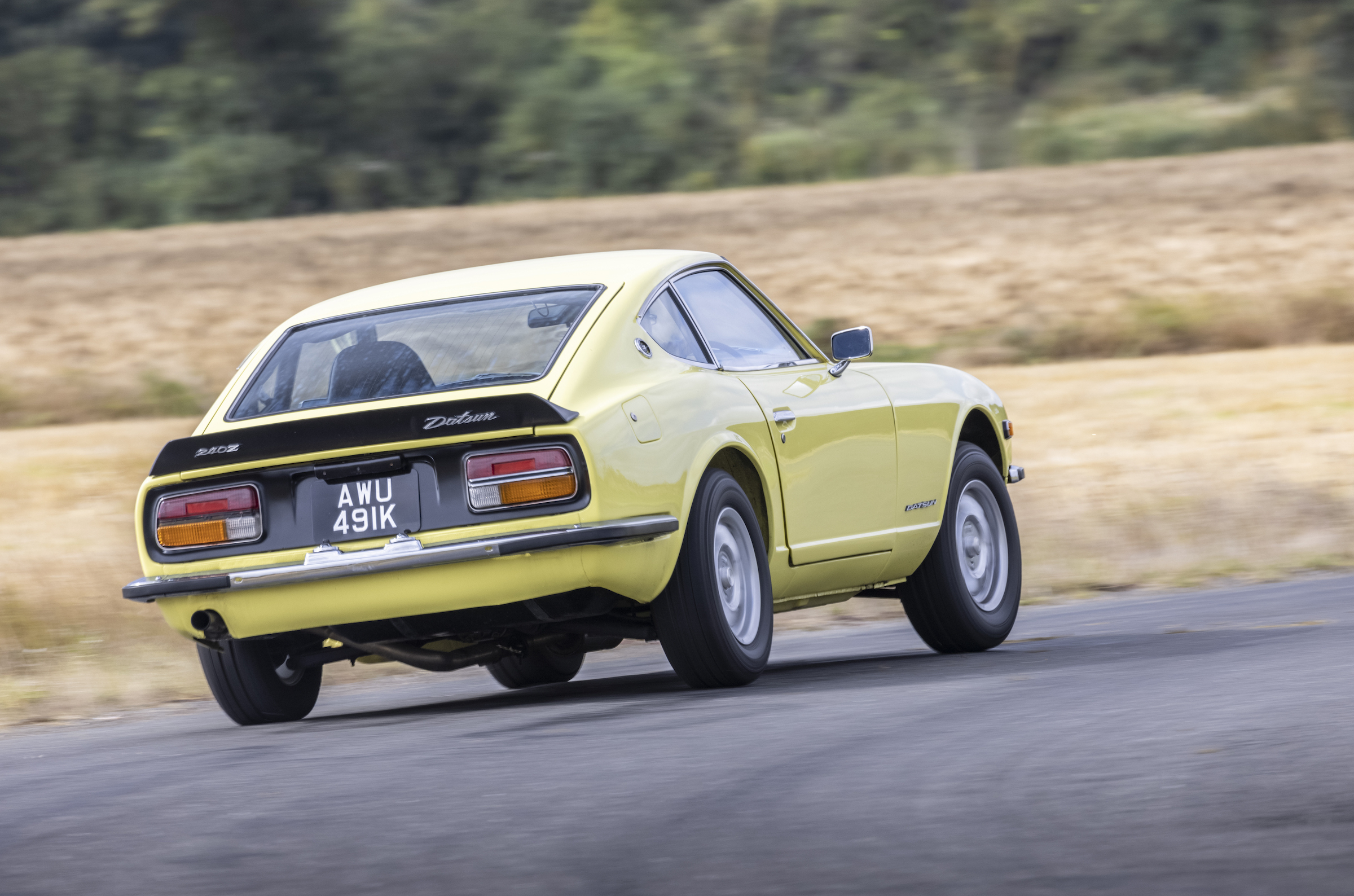 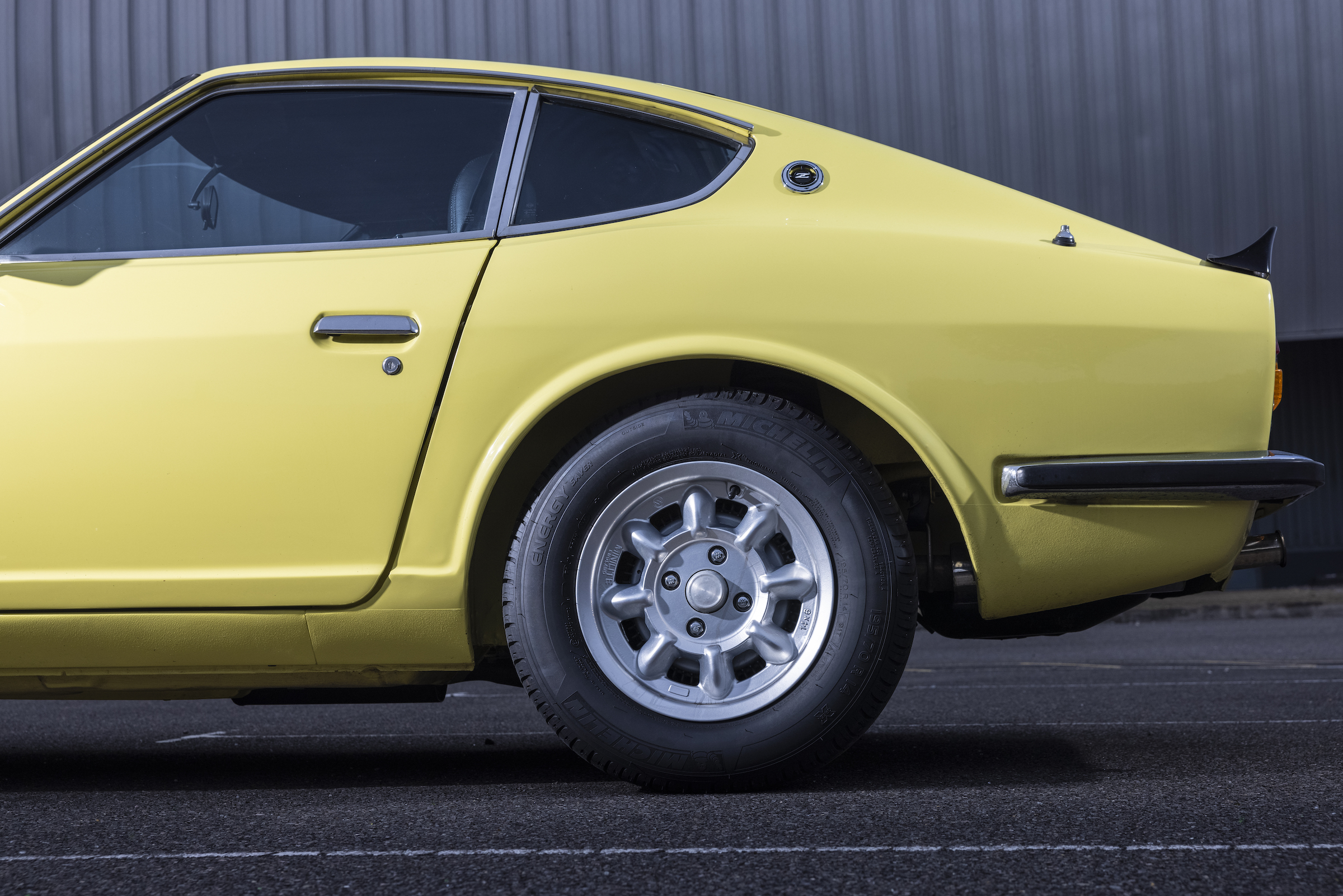 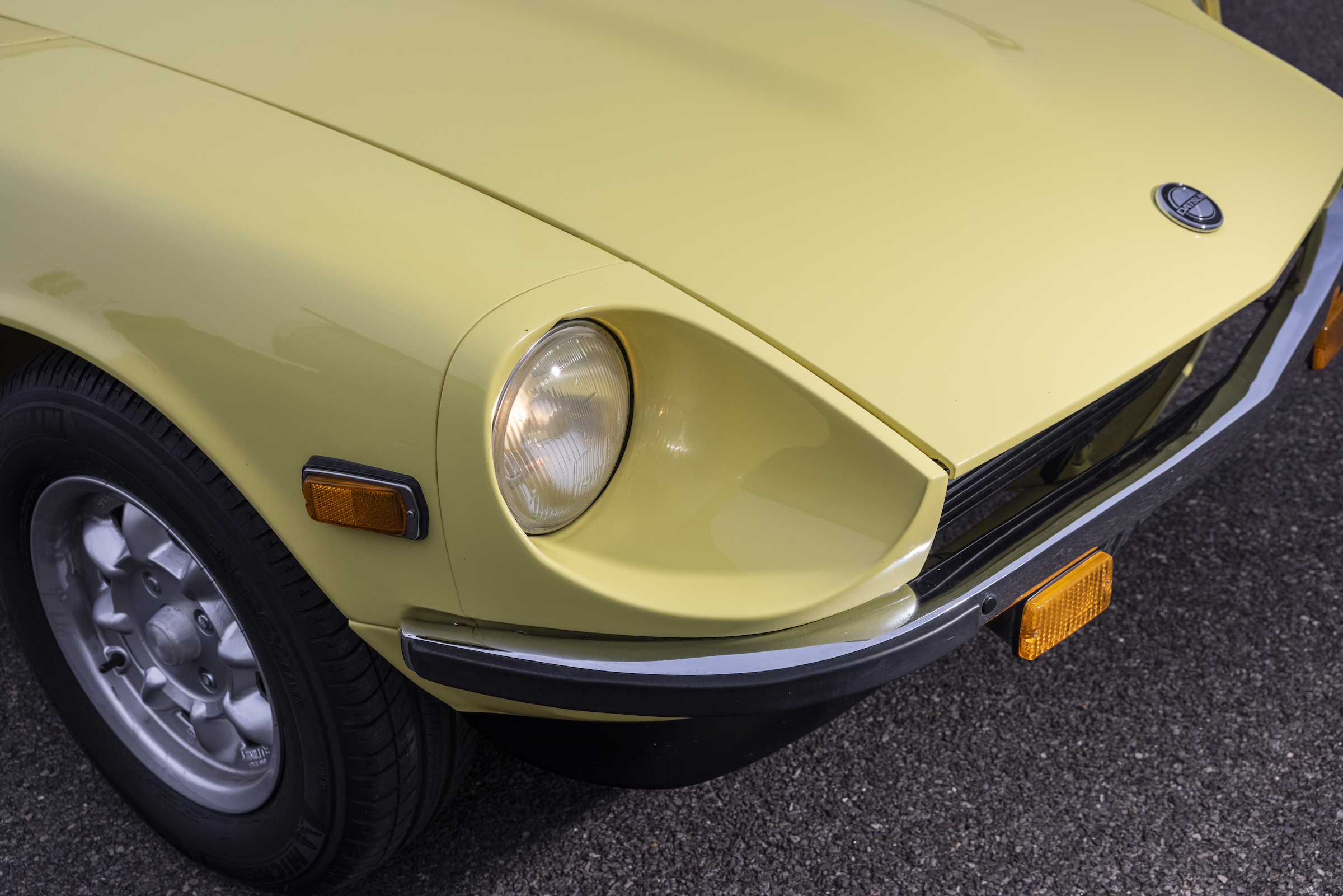 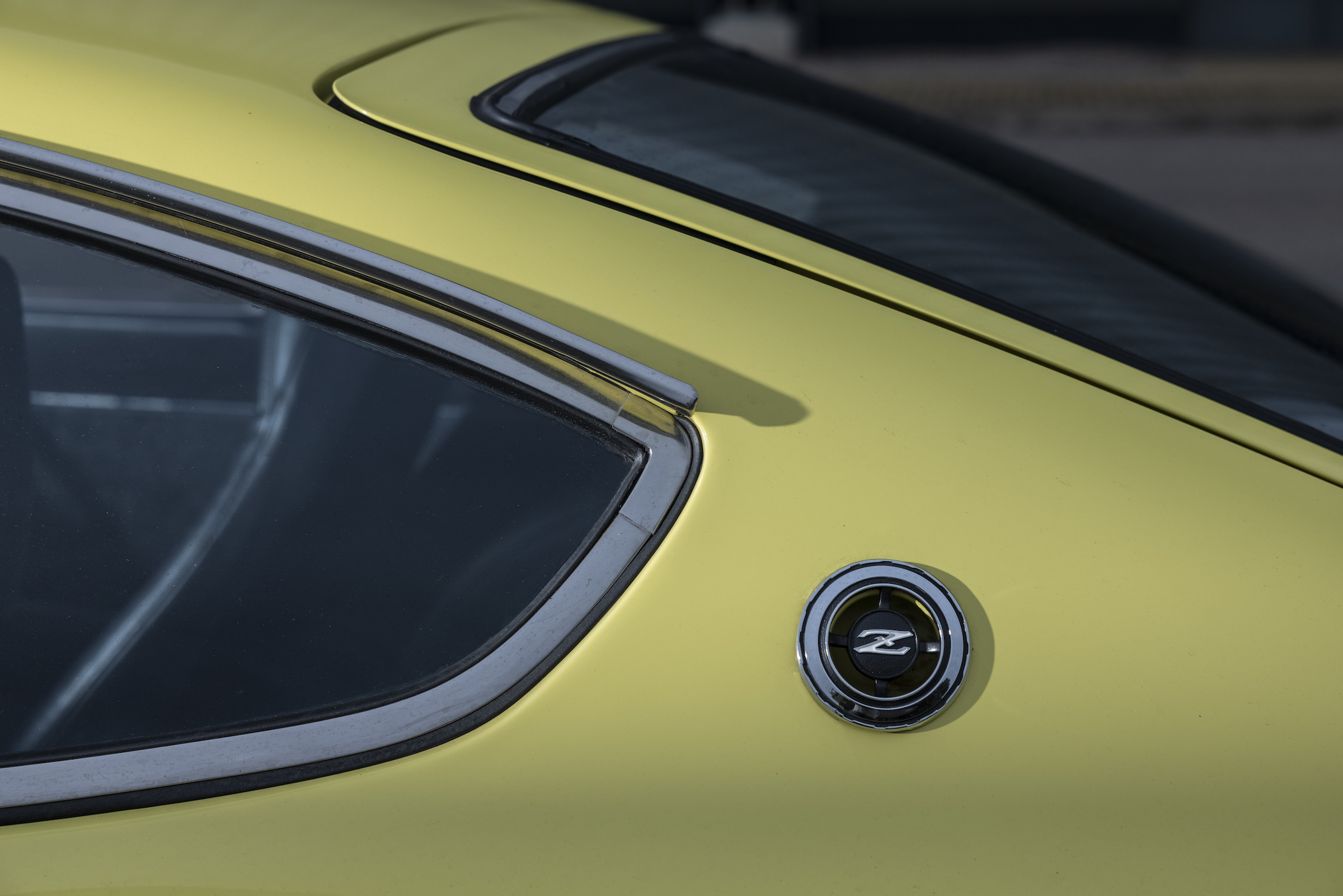 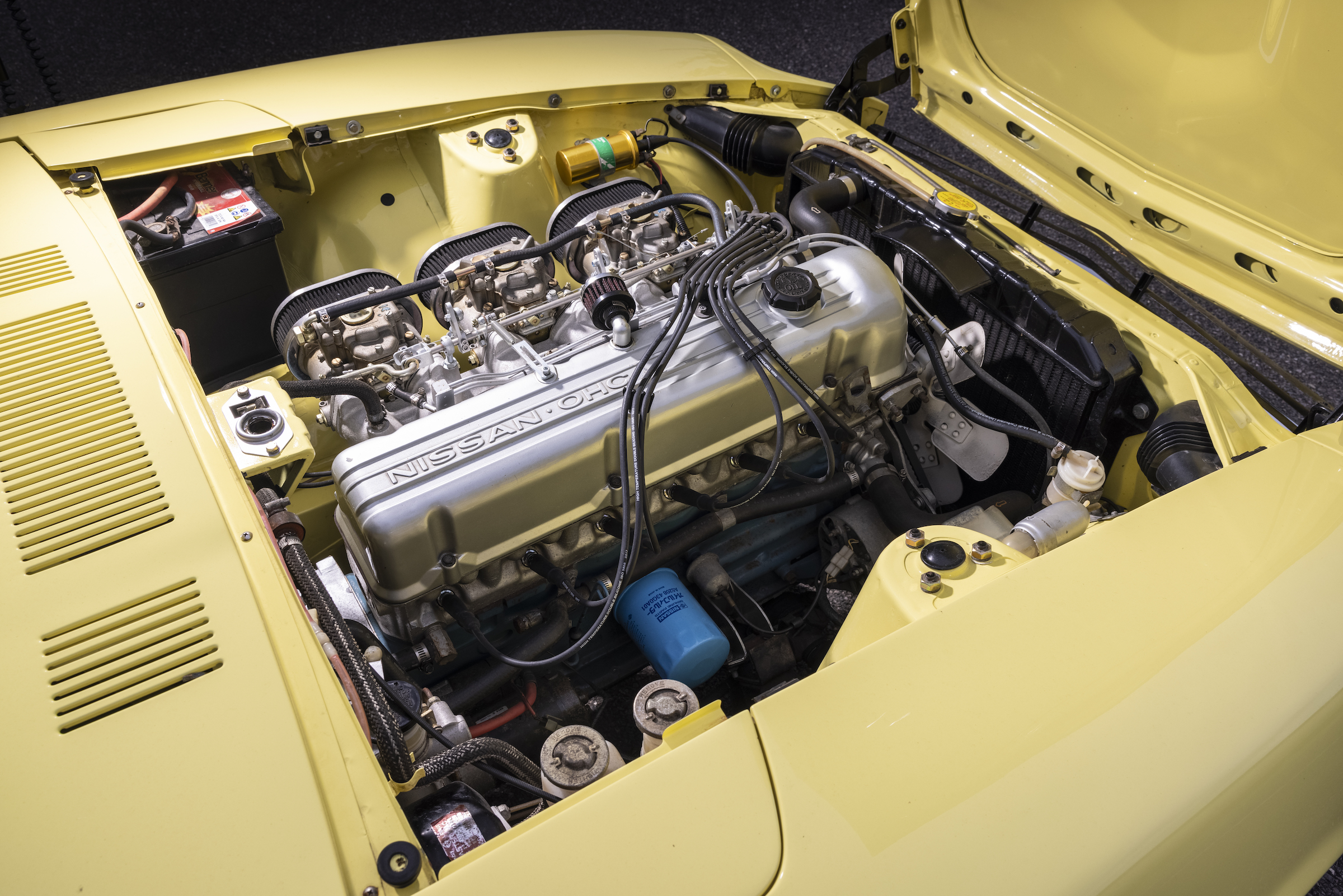 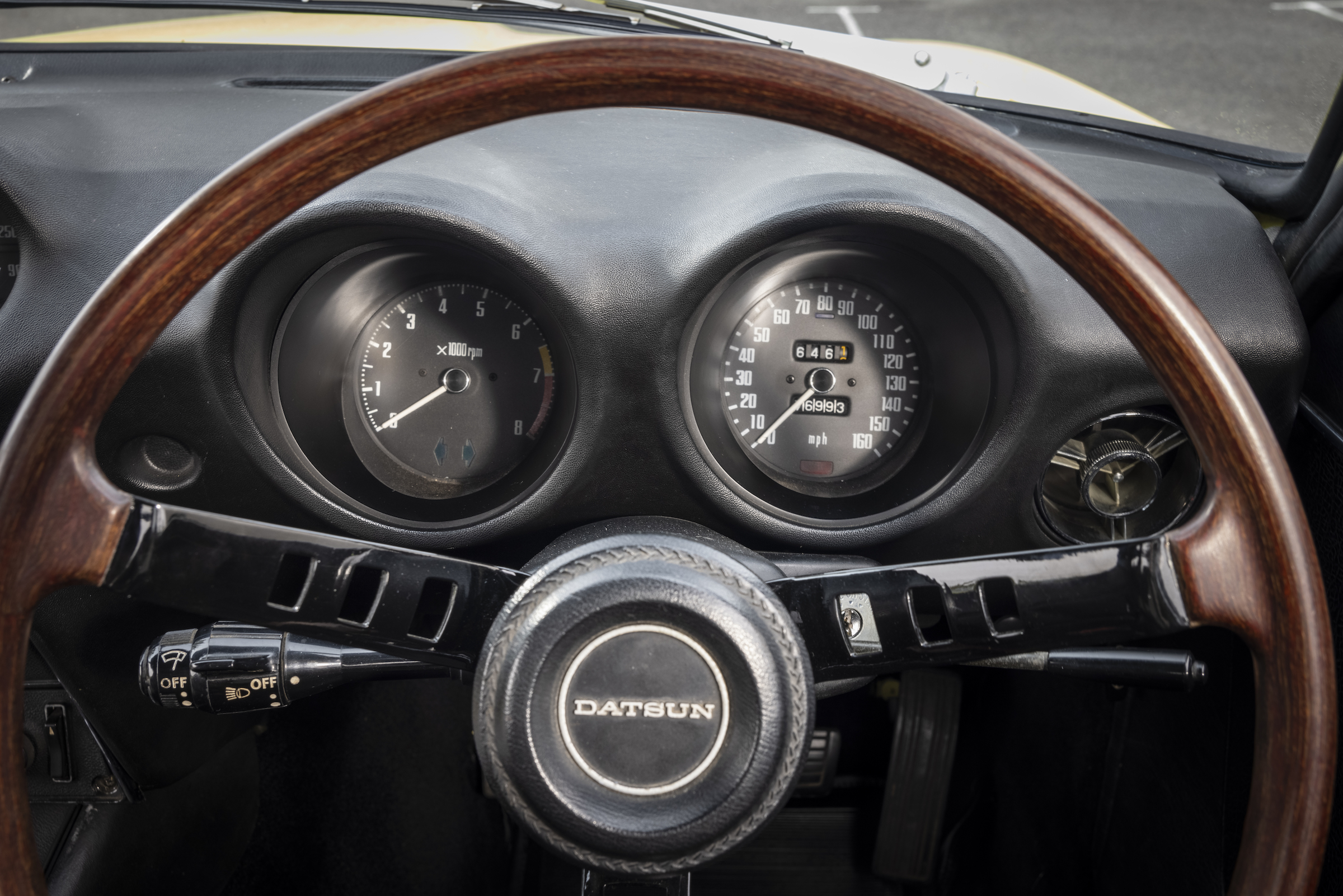 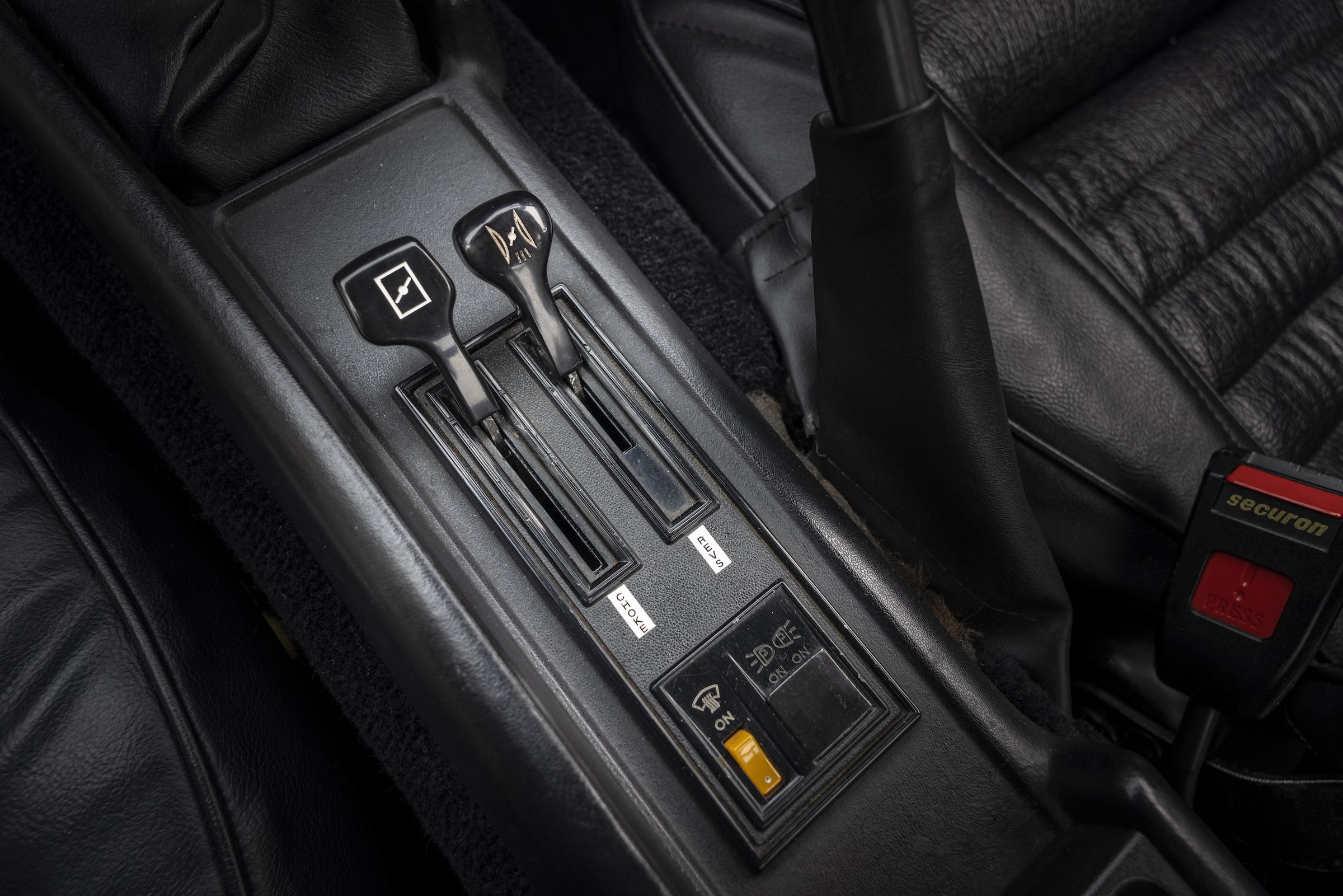