10 January 1901 – Prospectors strike oil for the first time in the US at Spindletop, Texas

January 1901 was the month that brought the United States of America into the oil age. On the tenth day of the month, an exploratory well struck a major oil well for the first time, and created a Texas oil boom.

Its discovery was what you might call an educated guess rather than pure luck. A businessman by the name of Pattillo Higgins began drilling in the area for a source of natural gas to power his brickyard.

While that venture was unsuccessful, he later teamed up with Captain Anthony Lucas, an oil explorer, and the pair sought various locations, with additional funding from investors John Galey, James Guffey, and Andrew Mellon.

It was Galey who selected a location just outside of Beaumont, Texas, and in October 1900, the group commenced drilling activities. Progress slowed when the drill hit a quicksand formation that had held up earlier efforts in the area, but once through the drill eventually hit a limestone vein and that December, the first evidence of oil.

On January 10, during replacement of the drill bit, the now 347-metre deep hole began to vent mud and gas, finally exploding with a geyser of oil more than 150 feet (50m) high. An estimated 100,000 barrels (4.2 million gallons) per day blew from the hole for nine days before the ‘gusher’ was brought under control.

The group’s suspicions about the area had been proven correct, and by that June the Spindletop oil field – named for the spindle-like appearance of the trees on the nearby Sour Spring Mound hill – was home to 13 gushers.

By the following year, more than 285 wells were in operation, and according to the Texas State Historical Association, local landowners did rather well out of the deal; one man, who had struggled to sell a tract of land for $150 for years, made $20,000 almost immediately (equivalent to more than half a million dollars today), and that buyer then sold the same land for $50,000.

From a peak of 17.5 million barrels of oil in 1902, the output at Spindletop declined rapidly. There was a second boom in 1925 when more was discovered – in 1927, the land yielded 21 million barrels – and the area continues to yield oil today, albeit nothing to touch that 1920s peak.

But Spindletop’s significance was in creating the USA’s first oil rush and, by extension, aiding its growth into the world’s most powerful nation. Today we’re all too aware that oil is finite, and that it has impacts greater than those at individual drilling sites, but on January 10, 1901, the future really must have looked exciting.

Freeze Frame: GM gambles – briefly – on electric power with the EV1
The Chrysler Neon was a gutsy slice of American pie
Liz Carmichael and the Dale car con of the 1970s 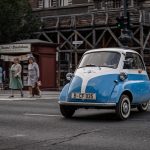 Small Miracles: The story of BMW's Isetta
A story about
Automotive history