The astonishing story of the jerrycan

Now and again, an invention becomes so ubiquitous that it’s rendered practically invisible. An industrial designer might consider that the ultimate compliment – a bellwether for a product’s longevity. All this was running through my brain when I recently had to explain to a friend what “that red thing” was, and what purpose it served. Really, when’s the last time you gave any thought to the humble jerrycan?

In defence of my friend, who is far from dense, the jerrycan is obsolete as far as many people are concerned. In the modern world, fluids simply gush from the tap or flow from a nozzle, rarely requiring a second thought. Not everyone can fathom that potable water is still in short supply for many populations in developing countries, or that transporting fuel safely can be a matter of life or death.

War has a powerful, almost unparalleled influence on driving innovation. The jerrycan has its roots in Germany, where it was conceived, mass-produced, and stockpiled beginning in 1937 for the impending conflict between nations. At the time, the invention was anything but invisible to American engineer Paul Pleiss, adherent of the all-important axiom that recognizing a great idea is equally as important as having one.

Pleiss worked for Ambi-Budd Presswerk (ABP), a German auto body manufacturing company and extension of a Philadelphia-based industrial outfit called the Budd Company. Pioneered by titans Edward G. Budd and Arthur Müller, ABP set up shop in Rumpler’s old Berlin factory where it specialised in pressed-steel technologies used for making BMW and Ford bodies. When war seemed imminent, ABP switched operations to satisfy military needs, including building bodies for the iconic light-duty Kübelwagen and Schwimmwagen. The company’s side project – developing one of the first jerrycan designs – was arguably even more influential, even if it at the time wasn’t officially recognised.

Hitler made mastery of liquid transport a priority, tasking Germany to devise a rigid and robust unit of storage that could withstand wear, pour well, stack conveniently, and carry easily. Müller, in addition to his ownership stake in ABP, was involved with a German-based engineering firm called Müller Engineering that was also working on the jerrycan project. In 1937, Vinzenz Grünvogel, chief engineer at Müller’s namesake firm, was awarded official credit for the creation of the Wehrmacht-Einheitskanister (Armed Forces Unit Canister), but it’s easy to see continuity from Grünvogel’s final design to Müller’s investment in ABP.

Pleiss, the American, recognised immediately the significance this new type of efficient liquid transport held for Germany. The jerrycan was superior in every way to the outdated American cans adopted from the WWI-era and infinitely more practical than the British “flimsies” – low-grade four-gallon cans made of tin. The name was apt.

Richard Daniel, a retired WWII US Naval commander and chemical engineer, recounted the merits of the German design on jerrycan.com:

“It was flat-sided and rectangular in shape, consisting of two halves welded together as in a typical automobile gasoline tank. It had three handles, enabling one man to carry two cans and pass one to another man in bucket-brigade fashion. Its capacity was approximately five U.S. gallons; its weight filled, forty-five pounds. Thanks to an air chamber at the top, it would float on water if dropped overboard or from a plane. Its short spout was secured with a snap closure that could be propped open for pouring, making unnecessary any funnel or opener. A gasket made the mouth leakproof. An air-breathing tube from the spout to the air space kept the pouring smooth. And most important, the can’s inside was lined with an impervious plastic material developed for the insides of steel beer barrels. This enabled the jerrycan to be used alternately for gasoline and water.”

This level of detail and practical consideration was light-years ahead of anything the Allies had in this arena. By the time war broke out in 1939, the Allies would have had to dedicate a Herculean effort to produce a comparable piece of equipment. That’s when Pleiss entered the picture.

As the story goes, it all started with a road trip in early summer, 1939, before the outbreak of European conflict. Pleiss and a fellow ABP engineer planned to embark on a journey across Eastern Europe and the Middle East, beginning in Berlin and ending in Eastern India, riding in a purpose-built vehicle. The problem? They were short on fluid storage. The quick fix, naturally, was to appropriate three examples of Grünvogel’s Wehrmacht-Einheitskanister from the nearby Tempelhof Airport before departing Berlin. The pair promptly secured the canisters to the underside of the rig and rode off with a few choice examples of intellectual property.

When war broke out, Pleiss’s German traveling companion was called back into service. Suddenly, the American was left to his own devices with a great frontier ahead of him. Before flying home, his friend allegedly slid him the comprehensive design plans. When Pleiss managed to reach Calcutta following what must have been one hell of an adventure, he stored their custom-prepped rig – jerrycans included – and flew back to the U.S. with the plans in hand. Once home, he arranged for the vehicle to be shipped with the cans still attached safely underneath.

For whatever reason, the American military did not latch onto this German innovation with immediate gratitude. The relevant parties in Britain, on the other hand, took to Pleiss’s revelation with great enthusiasm. They’d confiscated many of the cans after the Germans began to invade Norway, and it didn’t take long until British servicemen coveted the German invention as the gold standard of liquid transport. It’s at this point that the Wehrmacht-Einheitskanister ostensibly picked up its lingua franca name of “jerrycan.” As Britain got the jump on manufacturing replicas, the American military authorities remained steadfastly unconvinced.

It took several clever pleas to move the needle, as Richard Daniel recounts:

“My colleague and I learned quickly about the jerrycan’s advantages and the Allied can’s costly disadvantages, and we sent a cable to naval officials in Washington stating that 40 per cent of all the gasoline sent to Egypt was being lost through spillage and evaporation. We added that a detailed report would follow. The 40 per cent figure was actually a guess intended to provoke alarm, but it worked. A cable came back immediately requesting confirmation.

We then arranged a visit to several fuel-handling depots at the rear of Montgomery’s army and found there that conditions were indeed appalling. Fuel arrived by rail from the sea in fifty-five-gallon steel drums with rolled seams and friction-sealed metallic mouths. The drums were handled violently by local labourers. Many leaked. The next link in the chain was the infamous five-gallon “petrol tin.” This was a square can of tin plate that had been used for decades to supply lamp kerosene. It was hardly useful for gasoline. In the hot desert sun, it tended to swell up, burst at the seams, and leak. Since a funnel was needed for pouring, spillage was also a problem.”

It wasn’t until early 1943 that the British finally pumped out 2 million competent jerrycans for wartime use. In the meantime, battles continued to be fought and lives lost. By early 1944, the Americans and the rest of the Allies were finally on board. At this point, Britain possessed all the necessary means to manufacture a jerrycan equal to the German original. Roughly five years from the time Pleiss and his German friend passed through the Middle East on their way to India with three stolen jerrycans on board, a British factory in the Middle East was making millions of jerrycans destined for Allied forces.

We hear a lot about the tanks, vehicles and weapons that helped turn the tide of the gargantuan international crisis, but the simple jerrycan doesn’t exactly get a lot of airtime on History Channel. Nevertheless, jerrycans carried the fuel and water essential for wartime operations, and the same basic design remains in use today throughout public and private sectors.

The term has grown to include a family of cans differing in size, shape, and colour, but their essential function remains intact. Next time you’re out and about on the road and see a jerrycan strapped to the roof of a Land Rover, it might not seem so invisible. 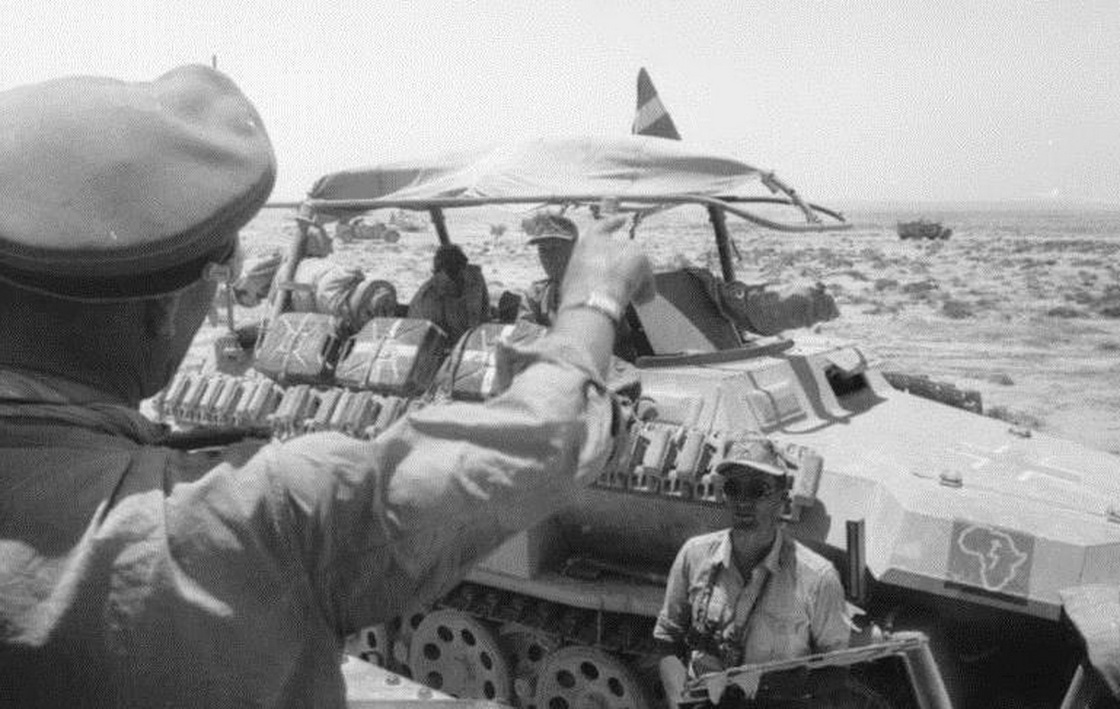 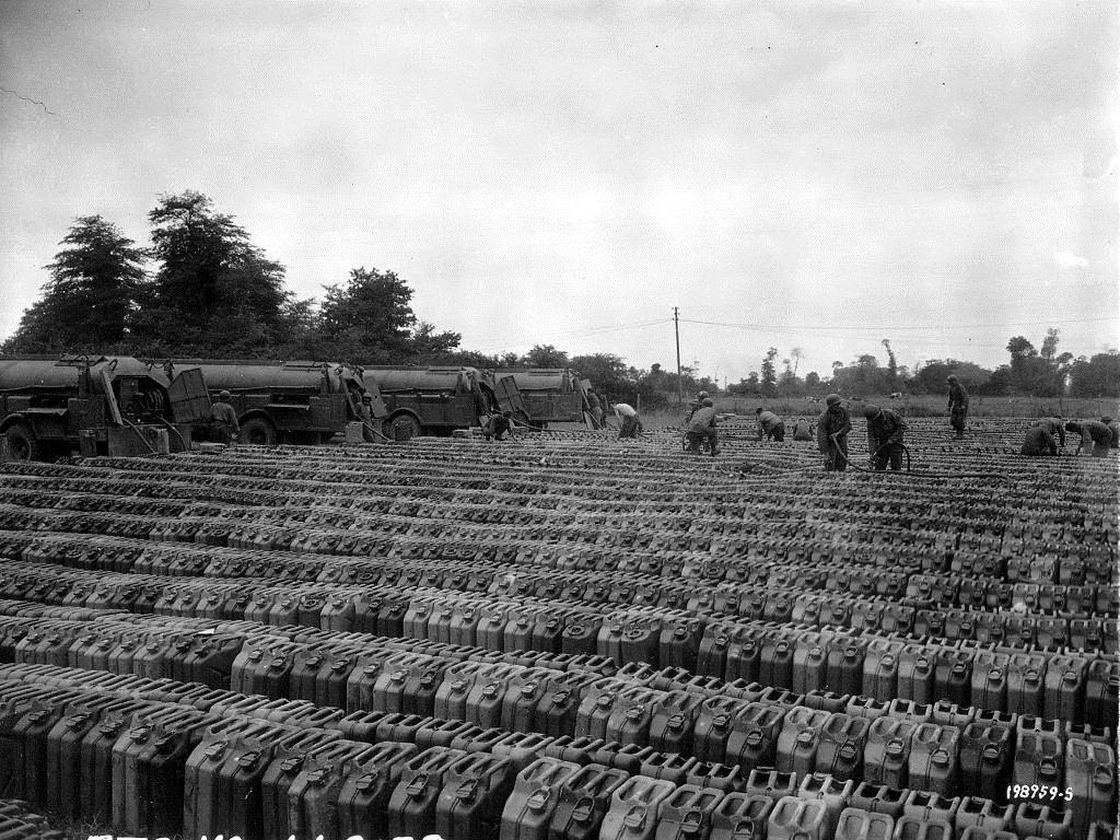 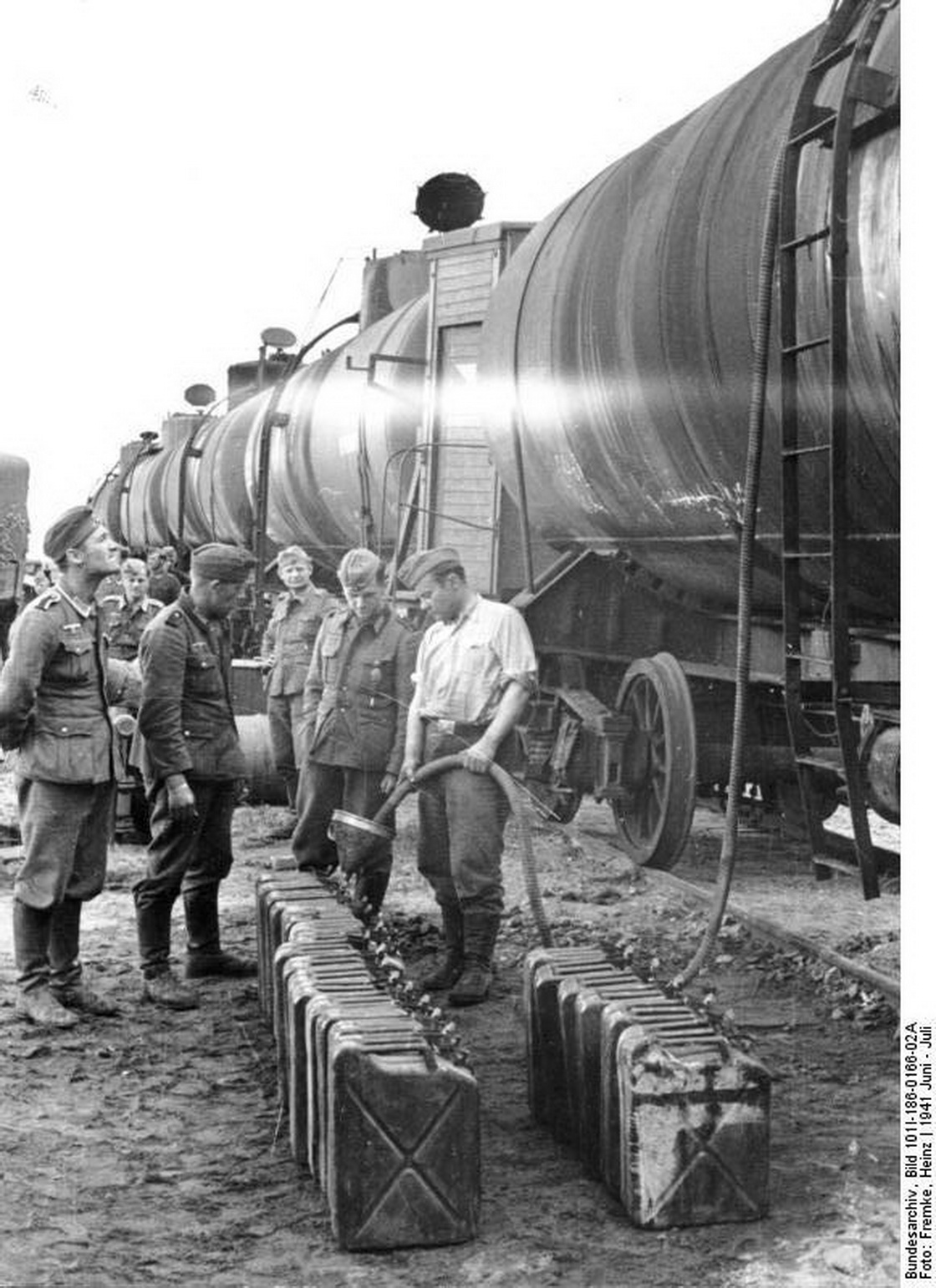 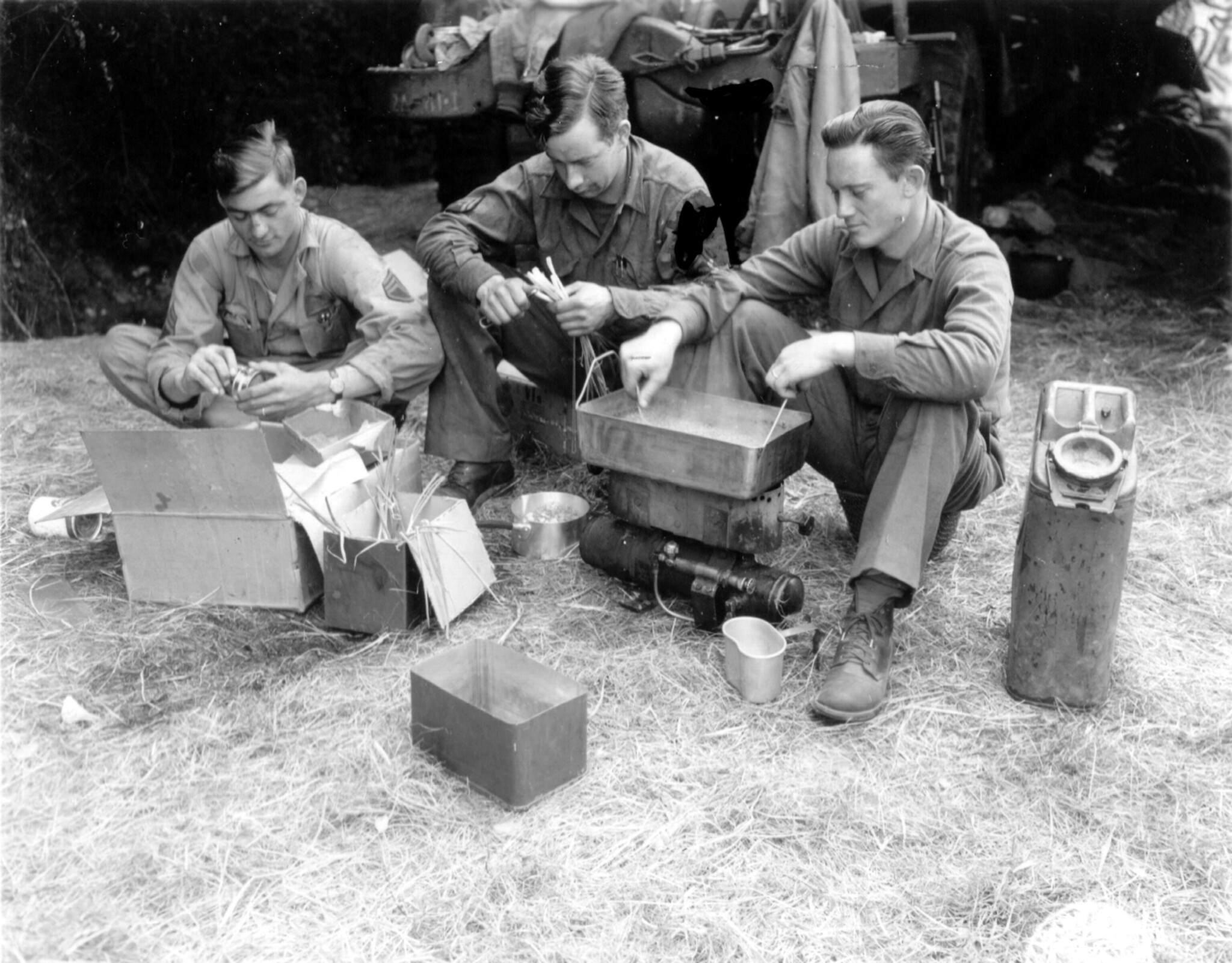 A story about
Fuel Innovation Maintenance and gear Technology Tools