Why you want one: The Hemi V-8 and love-it-or-hate-it styling are real ice-breakers

The English firm of Daimler (no relation to Mercedes-Benz) was known as a quality builder of stodgy limousines and hearses, particularly for the Royal Family, until the 1950s. Early on, they embraced the Knight sleeve-valve engine, whose principal characteristics were silence and mosquito-fogging smoke, and they favored the Wilson pre-select gearbox in the 1930s.

After WWII, there were slight signs of life, with the elephantine “Lady Docker” convertible show cars, and the smaller Conquest series, but nobody was prepared for the 1959 Daimler Dart two-seater.

At the time, export dollars were streaming in to Jaguar, MG, Triumph and Austin-Healey, and Daimler jumped in with an advanced, if flawed, offering of their own. They hired Triumph motorcycle designer Edward Turner, who came up with one of the best sports car motors ever, a 2.5-litre Hemi V-8.

The Dart had a four-speed gearbox (albeit with a crash first gear), disc brakes all round and a body created from that new-fangled lightweight fibreglass material. The result was 0-60 in under 9 seconds and a top speed around 120 mph. The new London-to-Birmingham M1 motorway had no speed limit at its introduction, since the mechanical failings of most British cars meant that they exploded after 10 miles over 70 mph, but the police needed something to chase the Jaguar XK120s, 140s and 150s. So a police version of the Dart (some fixed-head hardtops) was pressed into service, sadly with an automatic transmission.

Several events accompanied the Dart’s introduction at the 1959 New York Auto Show. The first was that Chrysler complained about the use of the name, as they were introducing a pig-ugly sedan to lug it around. The second was the reaction of many sports car fans when they saw the baroque Daimler, which was as eccentric as the first Reliant Sabre. The low, wide grille with its fluted surround closely resembled the 1958 Packard Hawk, most often described as an “angry catfish.” So the Daimler was sold in the U.S. as an SP250, but the design proved practically sale-proof anyway.

Equipment was excellent, with reclining leather seats, full instrumentation and even an optional overdrive. The SP250 weighed 2,910 lbs and initial price was $3,900. Knock-off wire wheels were optional, as was a hardtop.

Early cars had bodywork issues; the fibreglass flexed alarmingly on the TR-3-style frame, so that doors would pop open during corners. The brakes were excellent and the engine even better, but the steering was a very slow worm-and-peg design, though aftermarket rack-and-pinions systems have been produced. Many of the problems were solved in the 1962 “B” cars, and the 1963-64 “C” cars even had standard heaters, but it didn’t matter by then.

Despite a very pretty SP252 prototype, which addressed the original’s styling quirks, the Dart had no future. Jaguar had bought Daimler in 1960 for extra production capacity. They picked up the little V-8 and used it in a version of their Mark 2 sedan until 1969, but the Dart was eclipsed permanently by the E-Type Jaguar, which would raise the bar for British sports cars out of sight for more than 10 years.

Daimler SP250 Darts are rare these days with only about 1,000 survivors, but longtime owners are fervent in their support and inclined to remind critics that the appearance of the car, if it IS a problem, is not visible from behind the wheel, and won’t be a concern to the critics for long, given the car’s performance.

Thanks to its build dates, the SP250 is eligible for some great events and parts — even bodywork — can be provided by patron saints like Bryan Purvis, David Manners and John Carey.

For more information, contact the Daimler SP250/Dart owners club at http://www.daimlersp250dartownersclub.com/ for leads on cars for sale. Or call Claude Kearley at 01895  832145, or email webmaster ajwardle66@gmail.com. 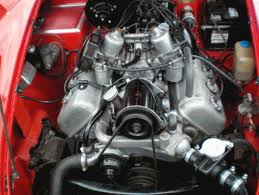