Freeze Frame: The drawings that showed us the world’s first car

The car started here. Well, one of them did. Several vehicles have been unearthed over the years that predated Karl Benz’s Patent-Motorwagen of 1886, but the idea of a self-propelled vehicle powered by an internal combustion engine with electric ignition – a car, by any other name – was exactly what Karl Benz submitted to the Imperial Patent Office in Berlin.

“The present construction is intended mainly for the operation of light carts and small boats, such as are used to transport one to four persons” read the text accompanying the patent images. “The driving power is provided by a small gas engine… the engine cylinder is kept at a steady temperature by the evaporation of water.”

Diagrams showed the spindly car’s primary elements, free of the embellishments that would decorate the prototype, illustrating the vehicle’s three-wheeled layout, its massive flywheel and its rear-mounted engine.

Other figures in the patent listing detailed the engine itself, the mechanism for starting and stopping the Motorwagen, and the mechanism for cooling the single cylinder – though Benz was clear to point out that he was patenting neither the engine nor the cooler itself.

The wording goes on, noting the tube frame construction of the chassis – notably described as a carriage frame, the most relevant reference to other transportation of the era – and that the “gas used to supply the motorengine [sic] is generated from naphtha or any similar or suitable light hydrocarbon.”

Benz goes on to describe how the flywheel, such a feature of the Motorwagen, is in the best position for both control of the vehicle, while low enough to ensure decent stability, and how the drive system works – moving the Motorwagen from rest meant pushing on a lever, which engaged a leather belt between the engine and the pulley that drove the rear axle via chains.

That same pulley operates the brake – pulling the lever in the opposite direction creates friction on the drive pulley, slowing the three-quarters of a horsepower Benz from its modest top speed of around 10mph.

Not that Karl Benz spent much time at that speed himself. A resolute and somewhat obsessive engineer, Benz fretted away at improving his device rather than marketing it to anyone. It was his wife Bertha Benz who, in 1888, famously made the world’s first car journey, taking the couple’s teenage sons from Mannheim to Pforzheim and back, a round trip of more than 120 miles.

Bertha filled up the car at pharmacies along the way, using ligroin – a derivative of the naphtha mentioned in the patent – and cleaned out a blocked fuel line with a hat pin. The journey created enormous publicity for the vehicle, and the Benz family, while the trip also served as a valuable road test, highlighting the strengths and weaknesses of Benz’s design.

It’s estimated around 25 Patent Motorwagens were built in period, the latest in 1893. Mercedes-Benz more recently constructed several replicas, now owned by museums all around the world – and each and every one of them still operates just as Karl Benz’s own Motorwagen was designed to in 1886.

Freeze Frame: The very first stretch of autobahn
What you C is what you get: Five generations of Mercedes C-class
Cowland on Cars: Why the London to Brighton Run is the drive of a lifetime 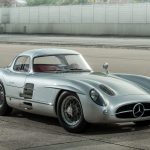 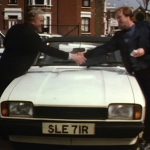