Fair
Condition 4
£141,000
#4 cars are daily drivers, with flaws visible to the naked eye. The chrome might have pitting or scratches, the windshield might be chipped.
Get a Quote
Good
Condition 3
£170,000
#3 cars could possess some, but not all of the issues of a #4 car, but they will be balanced by other factors such as a fresh paint job or a new, correct interior.
Get a Quote
Excellent
Condition 2
£195,000
#2 cars could win a local or regional show. They can be former #1 cars that have been driven or have aged. Seasoned observers will have to look closely for flaws.
Get a Quote
Concours
Condition 1
£265,000
#1 vehicles are the best in the world. The visual image is of the best car, unmodified, in the right colours, driving onto the lawn at the finest concours.
Get a Quote
Back to Body
Insurance premium for a
1992 Porsche 911 964 Carrera RS Coupe
valued at £170,000
£1657.74 / year*
Get a Quote 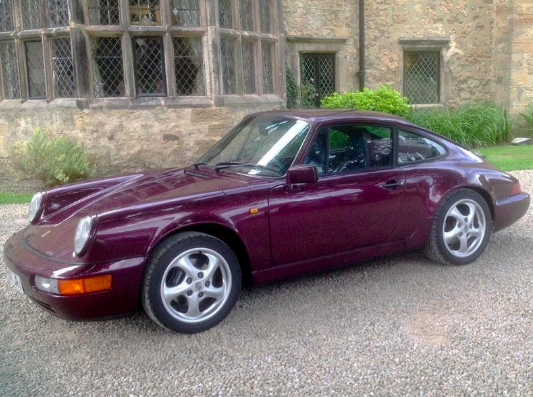 Tony Lapine's mid-1989 redesign of the Porsche 911 was called the 964, (the number adds 25 years to the 1964 intro). The Carrera 4, four-wheel drive model arrived first, with production starting in January, and the Carrera 2 followed in mid-summer. The new models were available in coupe, cabriolet and Targa body styles.

Lapine improved on Butzi Porsche's original 911 without destroying the shape. He retained the stovepipe front wings but rounded the shapes so much that the coefficient of drag was reduced from 0.395 to 0.32, which improved wind noise and economy. The bumpers were made of thermoplastic and the floor pan was flat but the old square mirrors were retained. Many owners replaced them with the rounded mirrors made available in 1992.

As an homage to the original Porsche 356 Speedster, a new version was introduced in 1989 with a cut-down windscreen and a fairly flimsy top. Most of the 2,025 were bought by collectors as an investment and prices are only now offering much return on the original cost. Only 64 turbo-bodied RHD Speedsters were built, and these cars are now the most collectible of the model.

Porsche claimed it had replaced 85 percent of the 1984 model's parts and the engine was bumped to 3605cc, producing 247hp. The new engine still had Bosch Motronic injection, now with hydraulic timing chain tensioners and ceramic exhaust port liners, to reduce heat transfer.

Early Porsche 964s were plagued by engine problems. There were two plugs per cylinder with twin distributors, which were belt-driven. In the event of a belt failure the engine would run very badly, as six plugs would fire normally and a seventh would fire all the time. The early C4 motor was designed not to need a cylinder head gasket, which was an unsuccessful experiment. Heads leaked badly and there were oil leaks past the through-bolt o-rings in the timing chain housing. The factory rebuilt numerous engines under warranty.

A more worrying invention was the Freudenberg dual-mass flywheel, intended to dampen vibration that rattled the transmission. The rubber parts in the clutch plate were moved to the flywheel, which was fine on paper, unless the driver slipped the clutch and overheated the whole mass. In that case the disc liner springs lost tension or the rubber damper broke. Starter gears and flywheel mounting bolts also created problems. Easy test: Let the clutch out slowly. If you hear a clank, do not drive the car.

Once sorted, the 964 engines proved bulletproof, as long as the owners drove them hard and used the right oil and correct spark plugs: they can last 150,000 miles before rebuild. Only consistently short-shifting the motor below 3,000rpm can cause significant damage and novice owners need to be educated about that fact.

The Porsche 964 also got a new suspension, with the rear torsion bars replaced by tubular shock and coil springs. Critics praised the C4's all-wheel drive as it finally laid the ghost of sudden rear-end breakaway, though the Tiptronic 'intelligent' automatic transmission proved frustrating as it tended to base its reactions on what the driver did last, and did not work the engine hard enough.

The Porsche 964 was joined by a 320hp Turbo in 1991, which remained rear-wheel drive, and with a 5-speed gearbox. The Freudenberg dual mass flywheel was replaced in 1992 with the improved LUK update, which welded the starter ring gear to the flywheel, and almost all cars will be so equipped today. Throughout 1992, European buyers could get the semi-competition Carrera 2 RS and U.S. buyers the RS America, the latter being 300lbs heavier and not as powerful.

A hair-raising 3.6-litre, 355 bhp Porsche Turbo 2 arrived in 1993, accompanied by a Porsche 964 Speedster which revisited the 1989 model. This attracted only 925 buyers, as opposed to the 2,065 who bought the 1989 model, but in some quarter this is considered the best variation. Prices for the two are comparable.