Fair
Condition 4
£8,000
#4 cars are daily drivers, with flaws visible to the naked eye. The chrome might have pitting or scratches, the windshield might be chipped.
Get a Quote
Good
Condition 3
£9,500
#3 cars could possess some, but not all of the issues of a #4 car, but they will be balanced by other factors such as a fresh paint job or a new, correct interior.
Get a Quote
Excellent
Condition 2
£12,300
#2 cars could win a local or regional show. They can be former #1 cars that have been driven or have aged. Seasoned observers will have to look closely for flaws.
Get a Quote
Concours
Condition 1
£15,900
#1 vehicles are the best in the world. The visual image is of the best car, unmodified, in the right colours, driving onto the lawn at the finest concours.
Get a Quote
Back to Body
Insurance premium for a
1982 Maserati Biturbo Base Coupe
valued at £9,500
£156.00 / year*
Get a Quote 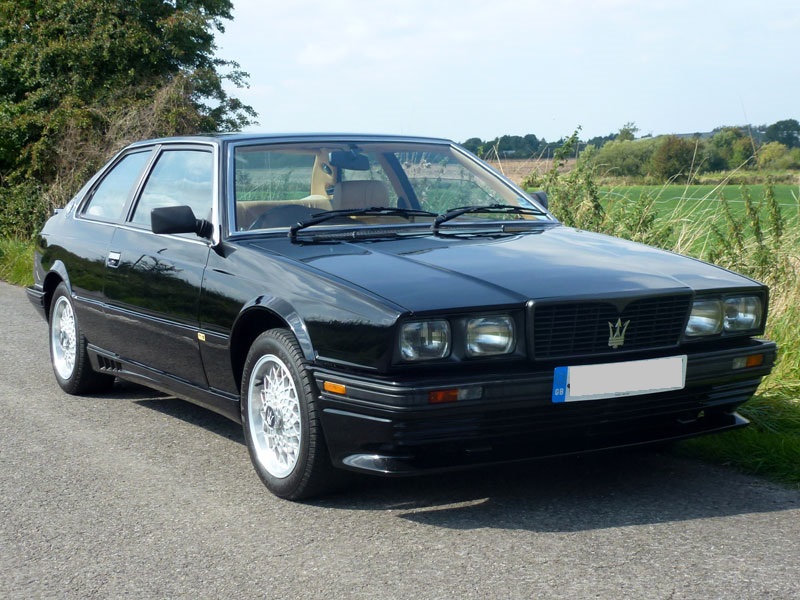 The Maserati Biturbo was Allejandro De Tomaso’s effort to revitalize the company, which had been divested by Citroen in 1975. Citroen merged with Peugeot after the seven-year affair with its Italian counterpart, that had produced the Maserati Bora and Merak, and the Citroen SM. Peugeot was bent on humiliating its long-time French rival and stopped making “more silly cars”. The remaining SM body shells were destroyed.

The situation looked brighter for Maserati. De Tomaso had revived Moto Guzzi and Benelli motorcycles, and was already managing the Innocenti plant in Milan for the Italian government. It had the capacity to build 10,000 cars a year, and De Tomaso concluded that a competitive small sports saloon would boost Maserati’s prestige.

De Tomaso’s brief was aggressive. He called for a boxy sports sedan, the same size as a BMW 3-Series, but styled like the contemporary Quattroporte. It was launched in 1981, and power came from an all-aluminium 2.5-litre SOHC V-6, energised by twin IHI RB-51 turbos, one on each bank. Two small turbos were chosen because they could spool up quickly, eliminating turbo lag. Three valves were used (two intake, one exhaust) to assist air flow and better place the spark plug. Early cars fed all this into a two-barrel Weber carburettor, but the engine still generated 185 bhp at 5,500 rpm and the Biturbo was as fast as a Ferrari 308 Quattrovalvole.

Power was fed through a ZF five-speed gearbox initially, though a three-speed automatic followed soon, and a four-speed automatic in 1989. Suspension was by coil and wishbone up front, with coil springs and trailing arms at the rear. Rack-and-pinion steering was fitted and power assist soon added.

Despite the fact that the Biturbo was 30 percent less expensive than the Bora, Merak and Khamsin, the interior was luxurious, with Alcantara and leather seating, wood veneer and wool carpeting. Biturbo interiors were even better from 1987, with full leather trim and Carpathian elm.

A Spyder was added to the line-up in 1986, along with a four-door saloon, the 425 (four doors, 2.5 litres). Mechanical improvements followed in 1987, when the engine was increased to 2.8-litres and 225 bhp, fuel injection was introduced, and the turbos were intercooled. The result was 0-60 mph in 5.9 seconds and a top speed of 146 mph. The Spyder gained the 228 name, while the sedan became the 430. Maserati retreated from the US market in 1990, but variations of the Biturbo platform were sold in Europe as the Ghibli, Karif, Shamal and QP4. In all there were an estimated 53 versions with the same power plant, generating up to 290 bhp. About 38,000 Biturbos had found buyers by 2001.

Even to experienced enthusiasts, the Maserati Biturbo is a daunting prospect. Apart from the ever-present spectre of rust, the cars are notoriously fragile (though later ones somewhat better). Oil screens can plug up and starve the valve trains, the alloy plenum over the carburettor can crack. Camshaft covers can leak oil, and fuel line failures spray petrol onto hot manifolds, with spectacular results. Early cars have weak clutches, though replacements are better. Early differentials have inadequate ring and pinion gears for the power. Alloy trailing arms in the rear suspension can corrode, and wheel bearings should be repacked annually.

The aluminium sump is mounted dangerously low, while the starter motor is set in the engine’s “V” at the rear, requiring removal of the intake manifold. Synthetic oil will extend the life of the turbos, but intercooled units are much better. Valve adjustment requires specific shims, and regular cam belt replacement is recommended every 6,000 miles. The original fuse box is easily overloaded – especially by air conditioning – though replacements are better. An upgraded alternator is recommended, but tricky to install.

It’s estimated that only about 500 Biturbos were imported into the UK and survivors are rare. Owners generally agree that a parts car is a necessary companion for a running car.