Fair
Condition 4
£3,100
#4 cars are daily drivers, with flaws visible to the naked eye. The chrome might have pitting or scratches, the windshield might be chipped.
Get a Quote
Good
Condition 3
£6,900
#3 cars could possess some, but not all of the issues of a #4 car, but they will be balanced by other factors such as a fresh paint job or a new, correct interior.
Get a Quote
Excellent
Condition 2
£11,900
#2 cars could win a local or regional show. They can be former #1 cars that have been driven or have aged. Seasoned observers will have to look closely for flaws.
Get a Quote
Concours
Condition 1
£15,500
#1 vehicles are the best in the world. The visual image is of the best car, unmodified, in the right colours, driving onto the lawn at the finest concours.
Get a Quote
Back to Body
Insurance premium for a
1953 MG Magnette ZA Saloon
valued at £6,900
£104.35 / year*
Get a Quote 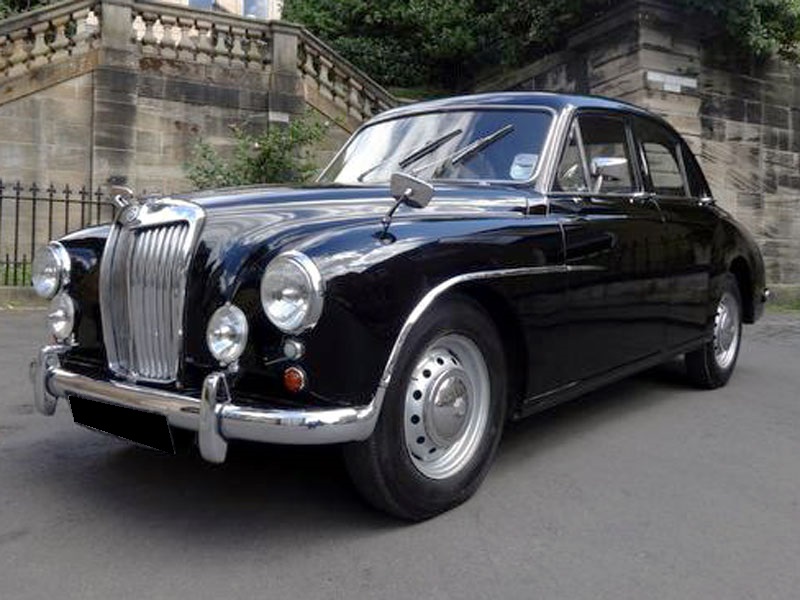 The MG Magnette ZA, Magnette ZB and Varitone are five-seater saloons produced from 1952 to 1959.

The Z-series Magnette was the successor to the YB saloon and wholly new in design and execution. The 4-door monocoque body (a first for any MG), with its overtones of the Lancia Aurelia Berlina, was the creation of Gerald Palmer, the YB’s 1,250cc engine was replaced by the BMC 1.5-litre ‘B-series’ unit, fitted with twin carburettors and there was rack-and-pinion steering. The suspension was independent coil springs at the front with a live axle and semi-elliptic springs at the rear.

The Magnette ZA was launched in October 1953 at the London Motor Show where its appearance and price garnered it attention (at £915 it was £74 cheaper than its predecessor). The body looked similar to its Nuffield contemporary, the Wolseley 4/44 but the cars had only boot lid, roof and front doors in common and the MG stood two inches lower. Top speed was 80mph and the fittings included a reversing lamp, leather seats and a heater.

Production fully commenced in February 1954 and the MG Magnette ZA now had quarterlights in the front doors. In 1955, MG Magnettes won the 1st and 3rd places in the Silverstone Production Car Race and the ‘tin top’ fascia was replaced by real timber in March of that year. In July 1956, the Magnette ZA’s engine was heavily modified with larger SU H4 twin carburettors and a compression ratio that raised from 7.15:1 to 8.3:1; power was now improved from 60bhp to 68bhp.

The ZA was replaced by the MG Magnette ZB in October 1956, the latter having an improved dashboard and a top speed of 86mph. At a price of £1,072 7s the ZB represented extremely good value for money and there was also a new version named the Varitone for its duotone paint finish and which also had a larger rear window and flashing indicators in place of the ZB’s trafficators.

Manumatic ‘clutchless’ transmission became an extra but it proved to be very unreliable for the 496 owners who specified it, and the option was dropped in October 1958. There was also a tentative plan for a six-cylinder version powered by the 2.6-litre BMC C-series engine but sadly Project EX202 never entered production.

All of the Z-series MGs were replaced by the Farina-styled Magnette Mk. III in 1959.

All Magnettes were powered by the BMC B-series 1,489cc OHV S4 engine twin SU carburettors and four-speed manual transmission with a floor-mounted lever and synchromesh on the top three gears.

Any version of the Z-Series is a stunning motor car, with its blend of an interior resembling a gentleman’s club with beautifully understated Italianate styling. And once you press the starter button, you soon realise that any well preserved Magnette will feel ten years younger than its actual age. In short – this is one of the great British sports saloons.

Rust is a major enemy of the MG Magnette, especially around the sills, box section by the front wheels, jacking points, floor and A and B pillars. Rotor arm and coils are prone to failing. There is a network of specialist owners’ clubs plus a marque register that add to the ownership experience.

The ZA and the ZB represent the high point of not just post-war MGs but of BMC’s 1950s’ output. And the Varitone practically defines the term ‘jaunty’.

MG’s Z-Series competed against the Singer SM1500/Hunter, the Citroen Light 15, the Sunbeam Rapier and the in-house rival of the Riley One Point Five.