It’s not unusual for Mini fans to convert their classics to Yamaha R1 power, but doing it when you’re sight impaired is quite something else. British enthusiast Simon Fox is documenting his build, with the help of a camera-and-occasional-spanner-wielding buddy, on a new YouTube channel called BlindLeadingTheBlind.

Simon is a blind mechanic who lost his sight after a car accident ten years ago, but he lost none of his enthusiasm. It’s also clear from his dexterity and confidence with the build that he’s got plenty of workshop experience, and says he has rebuilt several Mini-based projects in the past. That said, he’s never worked on an R1 engine before and fitting it transversely in the engine bay of a classic Mini isn’t exactly what it was designed for.

Simon is using a kit from LynxAE which uses a standard R1 engine and gearbox that bolts to the original Mini subframe. A chain drives a new limited-slip differential, which requires the drive shafts to be modified. No changes to the bodywork are required, so Lynx-converted Minis are quite the little sleepers.

Lynx recommends upgrading the brakes to cope with the performance from the 150-hp engine, and so far Simon has only reached the stage of preparing his engine ready for installation. We’re looking forward to following this one and really hope that Simon gets to experience his car on a track or airfield somewhere when it’s finished. 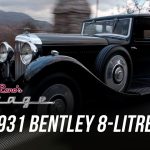